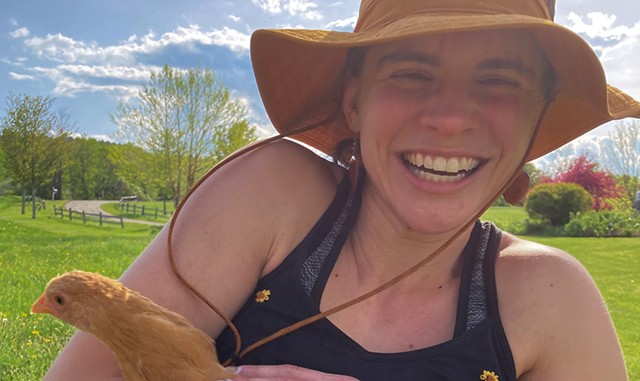 Shira Habermehl didn't see many cows growing up in Queens, N.Y., or on Long Island, where her family moved later.

Even after she started at the University of Vermont in 2015, Habermehl had never had a close encounter with a bovine, though Burlington, she realized, "is a bubble." By the time Habermehl moved to Richmond in May, she still had "never been on the same side of the fence as a cow, which sounds like a silly thing.

"But I just want to get closer to cows," Habermehl said.

It's actually not such a weird desire. Cow hugging has gained popularity as a stress reliever, and Stonyfield Organics even offered a "Date With a Cow" package on Valentine's Day.

Habermehl has long loved animals, especially dogs, and she and her roommates keep four chickens. But something about cows intrigues her, and she recently made it her mission to get up close and personal with some. Her friends encouraged her to drive by local farms to see if she could get into a pasture. Habermehl ultimately struck out on those journeys.

In a last-ditch effort, Habermehl took her quest to Front Porch Forum, letting her neighbors know she was "looking to befriend the local cows."

"If you have some cows that could use some extra love, I'm your gal!" Habermehl wrote last month. "Help a converted-to-country-living city girl out!"

The responses weren't exactly inspiring. One guy asked if she'd ever been cow tipping.

"And I responded by saying, 'No, otherwise I wouldn't be making this post!'" she said.

A woman interested in befriending cows herself asked whether Habermehl had gotten any leads. And another person recommended a farm in Shelburne that Habermehl later learned was more of a kids' camp.

She might have a solution: Habermehl plans to visit the UVM dairy barn on Spear Street to test her luck.

In the meantime, she's still holding out hope that a farmer will get in touch.

"Even if they need some help on the farm, I would love that," Habermehl said. "I'm always looking to learn. Farmwork in exchange for cow cuddles."