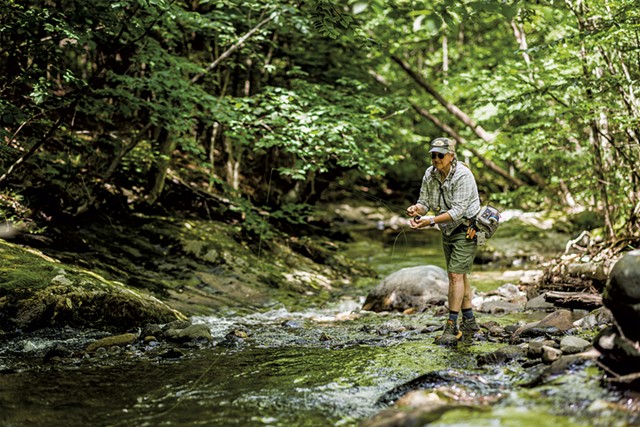 The front room of Jamie and Paula Eisenberg's Underhill home used to be full of flour and fruit for Poorhouse Pies, the baking business they sold last November. Now, where shelves once held rolling pins, pliers hang from a pegboard. Instead of instructions for chocolate cream pie, the recipe box contains cards detailing how to tie different kinds of fishing flies.

The former bakeshop has metamorphosed into the workshop for Jamie Eisenberg's new business, Eisenberg's Fly Fix. For the last four years, Eisenberg has worked part time as a subcontracted guide for Middlebury-based Stream and Brook Fly Fishing. As of April, she also put up her own shingle through which she offers guiding and coaching, custom-built fly rods and flies, and fly-tying lessons.

"It helps me stay in the moment." Jamie Eisenberg tweet this

After more than four decades as a chef and culinary instructor, Eisenberg, 62, has turned a longtime passion into her full-time job. While the professional switch may seem surprising, it leverages her talents for teaching and craftsmanship. Eisenberg is motivated to help others, particularly women, find the same joy and sense of accomplishment that fly-fishing has brought her.

The sport has also played a key role in Eisenberg's 30-plus years of sobriety. "It fills my soul. Cliché, but it's true," she said. "It helps me stay in the moment."

Eisenberg did not grow up fishing but stumbled onto it while living in Providence, R.I. She first moved there from New Jersey in 1978 to attend the Rhode Island School of Design, where she studied printmaking and stone-carving.

By that time, she said, she was already a serious pot smoker and drinker. Eisenberg got her first restaurant dishwashing job to pay for those habits and gradually worked her way up to executive chef, leaving fine art behind.

"I couldn't do it anymore," she said. "It was like my creative process had been sucked dry by drugs and alcohol."

Though Eisenberg was profoundly unhappy and lonely, she didn't believe her substance use was the problem because it was normalized in her circles.

"We all partied our brains out and smoked and drank and did drugs all the time during our shifts — before, during and after," she said.

Even when she left Rhode Island to attend New England Culinary Institute in Montpelier in the mid-1980s, Eisenberg kept using drugs and alcohol. 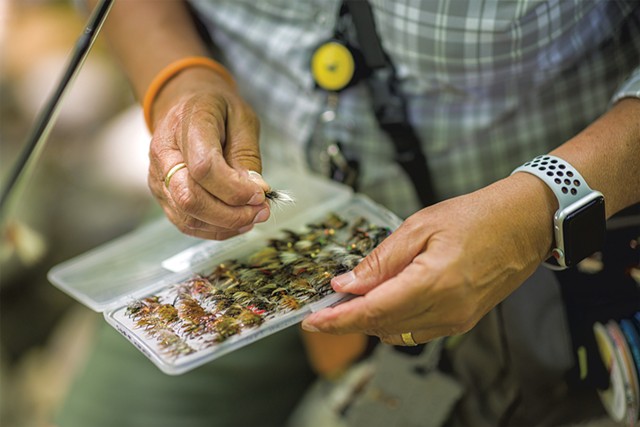 Fishing came into her life in the summer of 1988 after she'd returned to Providence. The restaurant where she and her then-girlfriend were working closed abruptly. Located en route between their two apartments was a "funky old tackle shop," Eisenberg recalled. "I don't know which one of us said — probably me — 'Let's just go fishing.'"

The pair bought a tackle box and rods and headed to a local reservoir. "We started catching fish, and it was fun," Eisenberg said.

Eisenberg quickly landed a new cooking job but soon "hit bottom," she said. "I got dumped by yet another girlfriend," she said, referring to her fishing companion. "I just had terrible, terrible hangovers [and] couldn't stop crying."

Health insurance that came with her job provided a catalyst for recovery. Eisenberg sought counseling for her "relationship issues," she noted dryly. The intake form made her substance abuse clear to the therapist, who gradually helped Eisenberg recognize her dependency.

One Sunday afternoon in January 1989, still hungover from the night before, Eisenberg gathered with friends, per usual, at a favorite bar. The bartender went down the line. "He got to me and said, 'Jamie, what are you going to have?'" Eisenberg recalled. "I had no idea that I was gonna say it. I just said, 'Nothing. I'm done.'"

The next morning, Eisenberg met up for breakfast with her ex, who had recently gotten sober. "I said, 'Maybe you could take me to one of those meetings someday,'" referring to Alcoholics Anonymous. By noon, they were at a meeting.

"There were little old ladies and bikers and businessmen," Eisenberg recalled. "I knew instantly I was home." With the support of AA, she has been sober ever since.

Quitting left a big hole in her life, Eisenberg said. Seeking a change of scenery, she moved to northern New Hampshire to work at a lodge.

Eisenberg spent a lot of time fishing there. One day, she recalled, she saw a guy doing a type of fishing she had never seen: casting, hooking a trout and pushing a button to bring in the fish with his automatic reel. "I said, 'Oh, my God. That was the coolest thing I've ever seen. Can I just sit here and watch you?'" she recalled.

The next day, Eisenberg went out and bought used fly-fishing gear and started teaching herself to fly-fish.

Previously, she had fished with lures and bait, she said, so she was intrigued by the skills required to read the river, select the fly and cast the line. "It almost seemed magical to me," she recalled.

As Eisenberg dug in, she relished learning about the environment, the relationship between the fish and the insects represented by flies, and the mechanics of casting. At first, Eisenberg said with a chuckle, "I'd say, 'I'm going to the river [to] make some spaghetti,' because I would just get tangled up in my line."

From the beginning, Eisenberg has primarily practiced catch-and-release fishing, meaning she rarely keeps the fish to eat. She uses methods, including barbless hooks, that she said "cause less harm, so [fish] can be released back into the river [and] can continue to thrive."

Eisenberg moved back to Vermont in 1990, initially to teach at NECI. Over the next 25 years, fly-fishing provided respite from her intense work as a culinary instructor and chef, but it took until 2017 for Eisenberg to make it more central to her life.

She was going through a tough time and wanted to fish more but not always alone. She craved friends, Eisenberg said, who would "call me up and say, 'Let's go fishing.'"

Over her years of sobriety, Eisenberg had learned a lot about herself: "I said, 'OK, what can I do to create community for myself?'"

Eisenberg rejoined river and stream conservation nonprofit Trout Unlimited and, at her first meeting, became fast friends with a woman whose license plate was Fly Gal. She hired Brian Zinger, co-owner of Stream and Brook Fly Fishing, to take her out fishing. She started a Facebook group called VT Fly Gals.

Fly-fishing can still be a boys' club, Eisenberg said. Zinger "was the first guy that ever said to me, 'Hey, you want to go fishing?'" she recalled. "I almost burst into tears."

Eisenberg talked with Zinger before launching her own business. "She's competing, but I don't mind," he said. "There's room in Vermont for both of us."

Since April, Eisenberg's Fly Fix has taken out about two dozen clients, at $50 an hour. 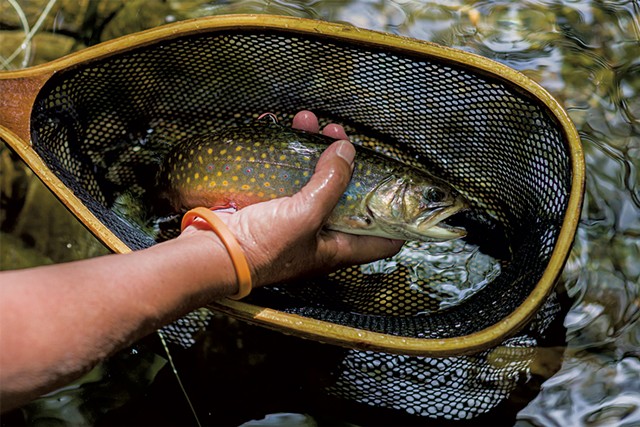 Liz Kiggen of Colchester has hired Eisenberg for two outings. She specifically sought out a woman after a disappointing experience with a male guide, she said.

"I just felt really comfortable with Jamie right away," Kiggen said. "Her teaching style is very conversational, and she never made me feel like an idiot. She knows the river, and she takes the time to point out things like fossils."

Eisenberg also thoughtfully paced her instruction. "Fly-fishing can be very technical. She checked in with me," Kiggen said. "I was blown away by that."

On a recent July morning, Eisenberg gave Seven Days a quick demonstration lesson. She put on her studded wading boots and jammed a Pittsburg Anglers hat over her gray braids. Approaching a shallow stretch of Browns River in Underhill Center, she noted, "I tell people, 'Start paying attention to the sky, to the bushes, to what bugs and birds are around.'"

Fish will naturally be attracted to flies that resemble the life cycle stage of what is in the area, Eisenberg explained. For her first cast, she selected a pheasant tail nymph fly made with brown feathers and shiny green Mylar intended to mimic a mayfly nymph.

Stepping into the river, Eisenberg gestured toward the shady far bank and pointed out two shadowy fish in the water before positioning herself to cast her line with a practiced fluid motion. It ribboned above the water before the fly settled into the current.

Several different spots and flies later, Eisenberg had achieved some strikes — when a fish goes for a fly — but had not caught any trout. She took a break to pick up rocks from the riverbed to see what nymphs were present to inform her fly choice.

One of the things Eisenberg loves about fishing is that it helps her see her environment differently. "I feel like I'm a steward of my backyard," she said.

For example, Eisenberg has learned that when people move rocks to create swimming holes, those dams can prevent fish from traveling upstream to spawn. Now she stops to un-dam them.

"I go back to the same places so often because I know them like other people will never know them," Eisenberg said. "That's intimacy to me, and that feels really good."

One more cast in a fresh location yielded a flash of silver. Eisenberg adjusted her line and added a second fly. "That's what I call dialing it in," Eisenberg explained. "A lot of anglers only try one way to do something and get frustrated."

Her strategy worked, landing her an eight-inch brook trout. After briefly admiring the fish, speckled gold and pink, she released it back into the cool water.

Earlier in the morning Eisenberg had shared a mantra she repeats every time she leaves a fishing spot. She paused to say it before heading back to the car: 'Thank you, river. Thank you, fish. Thank you, God.'"