A Food Writer Relearns How to Eat Sans Gallbladder 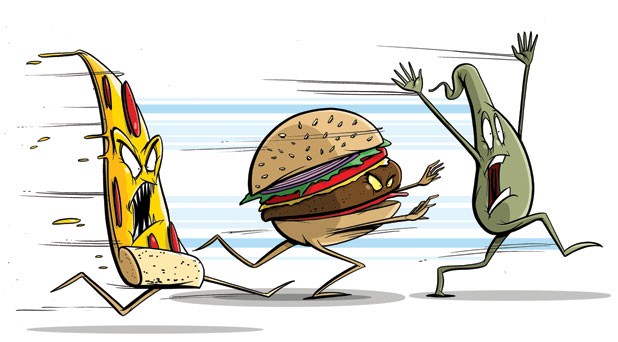 The fluid the ultrasound technician squeezed over my upper abdomen was warm and sticky. As she glided the transducer near my ribs, a picture began to form on the screen near my head.

Of foie gras, I thought. Clearly, it was terminal. My liver looked like foie gras.

The technician assured me that in fact my liver looked normal, not like I had been force-fed. I was mildly surprised, given that, as a food writer, I had spent the past five years practically funneling food down my gullet.

Though my liver was not as gras as I’d feared, what we were really looking for made itself amply known. A family of stones had moved into my gallbladder and made itself far too comfortable, while making me very much the opposite.

Clearly, one way or another, I was killing myself with food. My cholesterol was only slightly above normal, but a weight gain of 30 pounds in less than half a decade doesn’t lie. (Weight is a known factor in causing gallstones.) Nor could I ignore a cycle of pain unlike anything I’d experienced before, even in seven years of experimental treatments for the neurological Lyme disease that devastated my adolescence and young adulthood.

Gone were the days when I could blithely eat four different burgers at one sitting, along with beef-tallow fries, in the name of “research.” Now, even my far less indulgent meals all seemed to end in the same nocturnal scene: I woke up feeling like I was having a heart attack, only slightly lower down and to the right.

The pain spread from beneath my rib all the way up my back and into my neck. After a few attacks, I mentioned it to my general practitioner. She immediately scheduled an ultrasound, saying she expected my gallbladder would have to come out. Coming from my naturopathic, low-impact doctor, that sounded barbaric and extreme, so I started to do research on my own.

The gallbladder exists as a reservoir for the bile produced by the liver, a place for it to rest between meals and during the night. When you eat, that bile is sent down to the intestine to digest the next feast. Gallstones are hardened deposits of digestive fluid, most of them asymptomatic: My GP told me that when she studied gross anatomy in medical school, the only cadavers she saw without a few gallstones were those without gallbladders. Pain can develop, however, when the gallbladder repeatedly retains caustic bile after a fatty meal.

Humans can live without a gallbladder — as many animals do, such as horses and rats. In that case, the bile duct constantly delivers a light stream of bile to the small intestine. A laparoscopic version of surgery to remove the gallbladder was introduced more than 20 years ago, and since then, 600,000 have been performed each year in the United States.

It’s clear why sufferers seek relief. A chef friend of mine who had her gallbladder removed last winter, not long after the birth of her first baby, said her pain from the attacks was worse than childbirth.

I believed her. As the months went on, I learned that gall attacks are like snowflakes or fingerprints. Each has its own sadistic personality. The one certainty was that the longer I allowed the diseased organ to live in my body, the longer the attacks became. From an hour or two, they grew to around six — that was a lot of episodes of “Sherlock” and “American Horror Story” to watch while I tried to distract myself from the fact that I couldn’t sleep, or stop vomiting.

After my ultrasound, my GP sent me to a highly recommended surgeon, Dr. Neil Hyman, who told me that the longer I lived with the attacks, the greater the risk would be of one of the stones becoming lodged in my bile duct. The result could be infection, blockage of bile flow from the liver, and pancreatitis. The last, Hyman said later in a phone interview, can often be life threatening. Just like the heart using angina to sound the alarm before a myocardial infarction, my gallbladder was letting me know that I was in for trouble.

The surgeon’s advice was clear-cut. Attacks like mine, Hyman said, meant “the body is ringing the bell.”

Since I knew that most of the people who had their gallbladder removed were fatties — or, as Hyman more charitably described them, couch potatoes — I assumed the stones were my fault. But the surgeon explained that their development is due more to heredity and hormones — an unlucky ratio of bile salts, lecithin and cholesterol — than to diet. Most of his gallbladder patients are women of childbearing age, he said, who often need the procedure following a pregnancy. Spikes in estrogen are often culpable, and hormonal birth control, which mimics pregnancy, can play the same role.

Many people with gallstones, however, remain asymptomatic for life. That was where I suspected my food-writer’s diet was the culprit.

I told Hyman that I had begun trying to take better care of myself: I ate only a fraction of the food on my plate when taste-testing a new restaurant and tried to make more of my off-the-clock meals at home. With those precautions, I hoped I could postpone or even prevent surgery.

But before long, the attacks became less predictable. Not gorging myself on fat was no longer enough to forestall them: The pain might even appear after a dinner of sushi and salad. And I was exhausted. Every workday ended with me returning home for a two-hour nap — and I took two naps on weekends.

Before I decided to take the plunge, I talked with a cross-section of women who said they were relieved to have said goodbye to their gallbladders (it’s a larger secret society than you might think). Everything about the prospect of surgery terrified me, from my first experience with general anesthesia to the idea of choosing to live without one of my organs. But something had to change.

The day before surgery, I bought some nice new nightgowns to wear while recovering, along with a loose cotton dress with golden threads. I wanted to shine on my way in and out of surgery.

And I kind of did. I had fun at the hospital, even though I had to arrive there at an hour I previously didn’t know existed. When I woke up after surgery, I wasn’t as frightened as I had expected to be. It felt like being roused from a nap, not from a coma or a parallel dimension, the way the pre-op nurse had made it sound.

My boyfriend, James, was there, and my friends and colleagues were already calling him to hear about my progress. All I had to do was drink ginger ale and wait until the pain medication kicked in enough for me to go home, not long after noon.

The laparoscopic surgery I had is far easier than the open version, which requires a large incision in the abdomen. Still, for the first few days, the four wounds from just under my sternum to beneath my navel left me stiff and largely incapacitated.

In those days, I subsisted mostly on Gatorade (blue and pink, please) and Mrs. Grass Hearty Soup Mix. Even that was really just to fill my stomach for the next oxycodone.

Less than a week after surgery, I started to get hungry again. All I wanted in the world was a plate of Junior’s Italian’s chicken parmigiana. But a few simple sentences on the sheet of postsurgical instructions changed the game for me: “You can eat a normal diet, but avoid eating fatty foods for about one month. Fatty foods include hamburger, whole milk, cheese and many snack foods.”

In my drugged haze, I realized that I didn’t remember what a healthy diet was. No cheese or fatty meat? What could I eat, then?

Usually, I do all the cooking and James does all the dishes. Now, too weak to cook, I had to take a crash course in ordering lighter meals. I had eight tah chins from Farah’s Place, and bricks of chicken, rice and yogurt casserole I’d frozen presurgery. They stood me in good stead, but many of my other favorite restaurants were out of the question.

I already considered myself something of an Asian food specialist. Now, it was practically all I could eat. Pad Thai for dinner, then chicken pho for lunch. Vietnamese vermicelli salad for lunch, then sushi for dinner.

As I got my strength back, I began cooking. I tried turkey Swedish meatballs with Greek yogurt instead of sour cream. Then seared halibut with a lemon emulsion over mashed sweet potatoes smoothed with skim milk instead of cream.

I was learning how to eat again like a normal person, not a food writer. Then, one day shy of my two-week surgery anniversary, I went back to work.

I thought my first Alice Eats blog post would be an easy one. The subject was a new cupcake bakery, and I’d need to eat only a bite or two of a few different cupcakes. Yet the experience left me nauseated — no fault of the baker. In fact, my reaction was probably due more to simple readjustment to fat and sugar than to the surgery.

Within a few days, I could eat small bites of sweets. I even survived an assigned survey of local artisan ice cream makers.

At my two-week post-op appointment, Dr. Hyman told me that, theoretically, I could have been eating normally from the beginning. “After surgery, there should be no reason to restrict your diet at all,” he said. “The gallbladder doesn’t make bile. It’s just a storage tank for the bile.” In other words, I had all the digestion tools I needed.

Heartened by this advice, I reintroduced a bit of cheese into my diet. But I still haven’t eaten a hamburger, or anything fried, or even my beloved pork ribs, necks or shanks since the surgery.

And, unless I’m being paid to, I won’t. My run-in with gallstones was a wake-up call. I don’t have a gallbladder to sound the alarm anymore if I indulge. My former eating habits tended to cause cholesterol, and, given my family’s history of heart disease, I know it would be just a matter of time before that cholesterol decided to lodge in my arteries.

So now I’m on my own, trying not to kill myself with food one meal at a time. But that doesn’t mean I won’t celebrate my one-month surgery anniversary with a plate of that chicken parm.