A Flute Choir Takes Off in Vermont 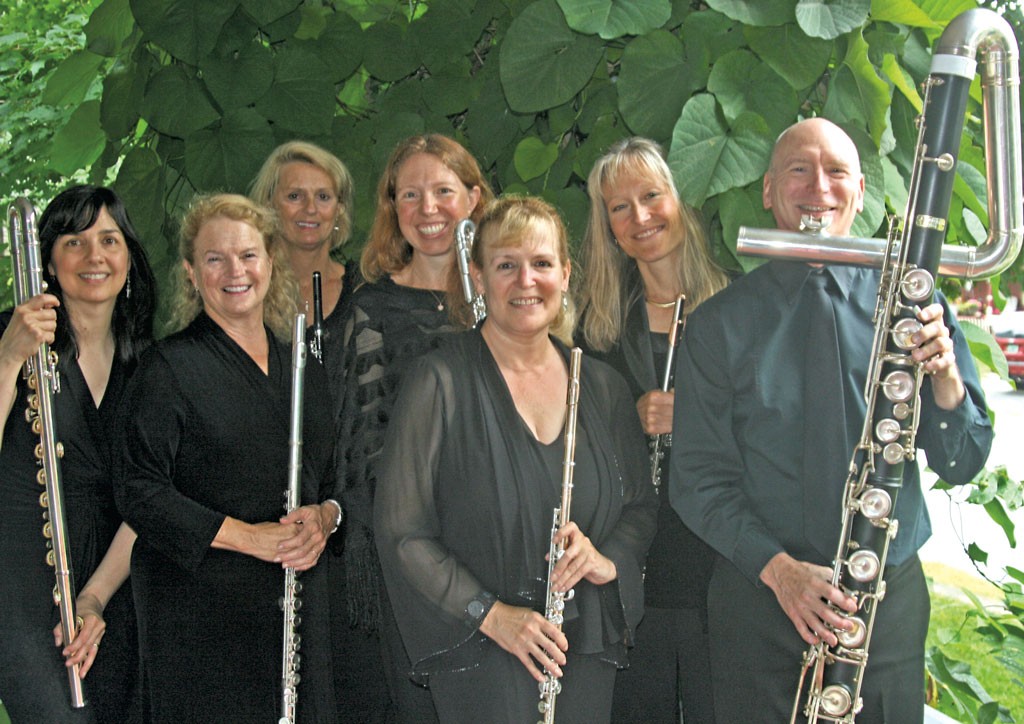 Imagine a flute's unique timbre — warm and piercing at the same time — and multiply it. That's a rough approximation of the sound of a flute choir, of which Vermont now has one.

The Vermont Virtuosi flute ensemble will perform its first concerts this weekend as part of the Vermont Virtuosi chamber music concert series, a project Barre flutist Laurel Ann Maurer launched in 2013. As lead flutist of the seven-member ensemble, Maurer considers the flute choir a dream fulfilled — which accounts for its inaugural program name, "Pipe Dreams."

The sound of a bunch of flutes doesn't quite sum up this unconducted ensemble, though. Flute-choir music, notes Maurer, is usually written for the full range of flutes — concert, alto, bass — as well as piccolo for the highest register and contrabass flute for the lowest. (That last instrument, a true oddity, looks like a giant clarinet with its mouthpiece-bearing end bent into a triangle.)

The resulting sound is as wide-ranging as an organ's but, says Maurer, "better, because you have more color. It's the full spectrum of sound, from lightest and brightest to deepest and darkest." It's "heavenly," she promises.


But what to play? There's not exactly a wealth of flute-choir music out there, so ensembles play mostly transcriptions. The program for this weekend's concerts, in Brandon, Montpelier and Burlington, includes the rapid runs of Rimsky-Korsakov's "Flight of the Bumble Bee," originally an orchestral opera interlude; and Ravel's orchestral ballet music "Daphnis et Chloé," as well as transcriptions of works by Mozart, Bach and Handel.

The only purpose-written pieces VVFE will play are by living composers: "La Milonga" by Los Angeles-based Christopher Caliendo; and "Fall in Arches" by David Gunn, the longtime Barre composer and — "full disclosure," he writes drolly in an email — Maurer's "spousal unit."

Gunn had never composed a flute choir before he met Maurer in 2009 during a Vermont Contemporary Music Ensemble rehearsal of one of Gunn's many (and quirkily named) works. Hoping to inspire him, Maurer gave him a recording of works in the genre. Gunn says he was unimpressed by "all these dumb transcriptions" and proceeded to write his first flute choir, "The Fifth Universal Principle of Alignment." The piece won the 2012 National Flute Association Flute Choir Composition Competition for best new composition; Gunn flew to the organization's Las Vegas convention to receive the award.

Maurer, it turns out, has a knack for enriching the flute repertoire. The former first flutist of the Salt Lake Symphony for 12 years, she has commissioned many new works from renowned living composers. Those include a piece from Augusta Read Thomas for Maurer's 1994 Carnegie Hall debut, and others from Joan Tower, Ellen Taaffe Zwilich and Jennifer Higdon. Since she married Gunn, Maurer says with a chuckle, "He has written quite a lot of flute music."

The original print version of this article was headlined "A Rare Ensemble, the Flute Choir, Takes Off in Vermont"