A Flower Display in Burlington Honored the COVID-19 Dead

By Sasha Goldstein and Matthew Roy 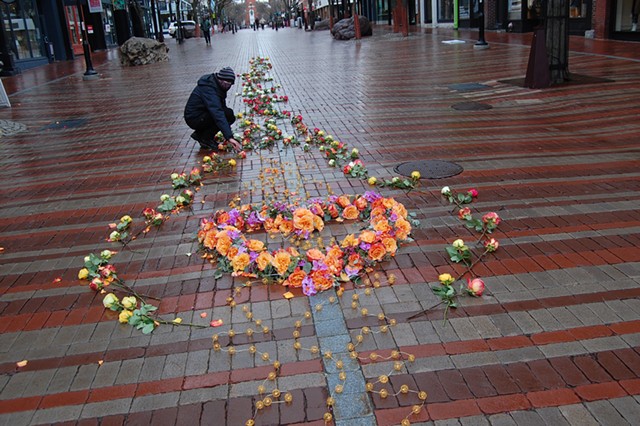 A colorful display on Burlington's Church Street caused passersby to pause, pull out their smartphones and take photos on Monday.

Orange roses and fuchsia phalaenopsis orchids had been placed on the bricks in the shape of a heart. Dozens more roses surrounded the heart and extended down the pedestrian walkway. Each represented one of the more than 200 Vermonters who have died from COVID-19 since the disease struck the state nearly a year ago.

"It often feels like we're just talking about numbers and tallies," said creator Jayson Munn, a florist who mainly works weddings and other events. "I thought this was a great opportunity to do it in the public square."

Burlington was one of about 80 cities nationwide that hosted an art installation as part of the Floral Heart Project. Created by New York City-based artist Kristina Libby, the idea was to designate March 1 as a national day of mourning to publicly grieve those "lost to and suffering from COVID-19." As of Tuesday, more than 515,000 Americans have died.

Munn said one woman he talked to had lost her husband to the disease. She told him that visiting the flower memorial had been the first time she'd publicly grieved his death; both she and Munn "started bawling," he said.

He gave her a rose.

"It was a really touching, touching moment," Munn said.

Daniel "D.J." Boyd of Wilmington was walking down Church Street when he saw a crowd by the display and thought, Gee, only in Burlington do you see a bunch of roses in the street and everyone just walking around taking pictures.

Boyd walked over himself and read the sign that Munn had erected explaining the display, "and it just struck me," he said. His uncles, twins Leon and Cleon Boyd, had died of COVID-19 early last April, just six days apart.

"It's amazing," Boyd said of the display. "It's a good gesture. It puts it into perspective, you know?"

Boyd walked over to Munn and told him he'd lost his uncles. Munn picked up two long-stemmed roses from the bricks, and then handed them to Boyd.