A Finger in Every Pie 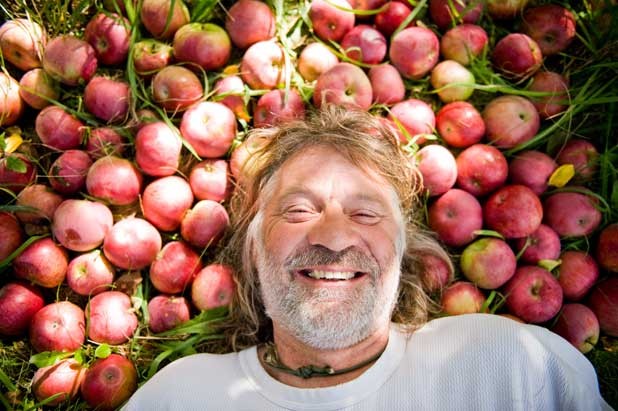 Turkeys stroll the field on Bostwick Road. Twenty of them, all looking for a snack. If only they knew that, just a few yards away, they could treat themselves to row on row of juicy apples at Shelburne Orchards. As is the case every year, some sections have been designated as diseased and not fit for eating. Prime turkey fodder.

Inside the fences, the orchard complex feels like a world of its own, one that’s been crafted with a decidedly fanciful touch. Visitors walk past the the Cider House store and the Orchard Café, with its wood-fired “Ever Love-N Oven” that produces pizza and apple-cheddar toast on weekends. It’s hard to miss the pervasive sense of Ben & Jerry’s-style tongue in cheek — and that comes straight from orchard owner Nick Cowles, a part-time musician who used to lead an outfit called The Cheeks and Buns Band.

With his mop of curly hair and 6-foot-5 stature, Cowles looks something like a stretched-out Robert Plant, and he admits he’s a bit of a merry prankster: “I’m really good at telling all kinds of lies about myself,” he offers.

What’s not a lie? Cowles has lived on the property for almost all his 59 years. His father, William Cowles, trained as an architect, acquired the 500 trees by buying out a neighbor in the 1950s. In the early ’70s, the senior Cowles became Vermont Secretary of Human Resources. In that role, he helped spearhead the establishment of Act 250, the “Land Use Law.”

It was around this time that Cowles decided to sell the farm. Nick, one of six kids — and, as he puts it, “the only one who stuck around” — decided he couldn’t let the orchard leave the family. “I don’t think I’ve ever not been here for fall,” he says.

These days, what fall means to Cowles is “eight weeks of 12- to 14-hour days, seven days a week with no break. Every year at the end of the season,” he adds, “I say, ‘No way in hell am I doing that again!’ I get away for the winter, and then by spring I’m pumped to start again.”

It was on one such winter escape in 2000, to ski in Colorado, that Cowles got an idea about how to add value to his apples — by making them the centerpiece of a larger local harvest celebration. In Paonia, Colo., he met an elderly farmer, Glenn Austin, who suggested he take advantage of the budding Vermont localvore scene, recalls Cowles: “He said, ‘Your ace in the hole is, you’ve got that great community and beautiful location.’”

But if he built a place for that community to gather, would it come? Cowles decided to find out. The first Small Farms Food Fest took place in 2001, just days after the September 11 terrorist attacks. Farmers came to the Orchards and sold foods prepared from their produce, from grass-fed beef to wine. It was a healing event for still-shocked growers and guests, says Cowles, and it “kind of put the orchard on the map.”

Back in 2001, 20 percent of the apples grown at Shelburne Orchards were sold on site. The rest were shipped off to Price Chopper or “to crappy wholesalers,” says Cowles. Today, he still supplies smaller local stores such as Shelburne Supermarket, City Market and Healthy Living, but 90 percent of his apples are sold to visitors who consider the Orchards a destination.

About 20 trees remain from the orchard Cowles’ father purchased at midcentury; he estimates they were planted in 1909. The rest of the 80 acres of organic trees now include popular eating apples such as Empires and Golden Delicious, and replanted antiques such as Northern Spies and Tolman Sweets.

The picking season begins with Paula Reds and Jersey Macs in late August. More and more of the nearly 20 apple varieties ripen through mid-October. By Christmas, Terry Hotaling, Cowles’ righthand man, is the only employee still working full time. “It’s beautiful,” Hotaling says of his time alone pruning trees in the ice and snow.

In the spring, as the trees wake from their winter hibernation, Cowles and co. make sure they’re properly nourished with compost and fertilizer. Bees from Champlain Valley Apiaries begin to buzz around the blossoms. Then it’s time to train any new pickers in the art of sorting apples and removing them from the trees without bruising them.

As Cowles talks, Hotaling pops in and out of his office, which takes up part of an old wood shop. (The rest of the building is reserved for donut and pie making.) Hotaling borrows Cowles’ glasses to use his computer for some accounting. The pair joke and grouse as if they’ve been doing it most of their lives. They have — Hotaling has been at Shelburne Orchards almost as long Cowles, who says, “I couldn’t do this without him.”

“Of course you could,” replies Hotaling. “You could hire three people to do my job.”

Another multitasker is Megan Humphrey, whom Cowles describes as Hotaling’s wife. (“That’ll do,” says Hotaling of the word choice.) Humphrey is the brains behind the ever-expanding roster of events at Shelburne Orchards each autumn.

Cowles says he feels blessed to have “people who know how to put my ideas into action.” The latest of these brainstorms involved installing a still in the orchard’s warehouse this April. The plan is to manufacture a Shelburne Orchards line of Calvados (apple brandy), and Cowles says he’s “two seconds away” from getting government approval.

A glow creeps across Cowles’ face as he admires his still and white-oak aging barrels. A metal sculpture of a bootylicious cherub perches above the setup. “That’s the Angel of Spirits,” he says.

The first batch of Calvados could take as long as three years to age to perfection, though Cowles plans to sample it next fall. The endeavor is part of Cowles’ “plan of making more money without making more work,” as he puts it. It helps that Shelburne Orchards is one of the largest sellers of apple trees in New England. “There’s no added overhead,” Cowles says of this extra revenue stream. “It’s kind of a steady income.”

The proliferation of Cowles’ sideline businesses is apparent from a walk through the warehouse behind the store, which sells Shelburne Orchards T-shirts and myriad apple products, including cider donuts and three different varieties of cider. Cowles’ 25-year-old daughter Mariah stands at the “Jack Pot,” mixing the filling for 80 apple pies at once. A family friend named Nelly, visiting from Charlotte, N.C., recommends frying up some Southern-style apple pies. “It’ll put 2000 pounds on the bumpky,” she says, but assures Cowles it’s worth it.

The “Jack Pot” serves as the brewing vessel for another Cowles creation: Ginger Jack, a nonalcoholic but still heady concoction of ginger and apple cider. Painted red and green, the cider press dominates one side of the big room.

Though Cowles employs between 15 and 18 people during the active seasons, no one has a set role, he says. One person not bustling around: Cowles’ wife of 30 years, Cindy. The former dancer is happier to occupy herself with her two horses, Mickey and Moonshine, who show up at orchard events. “She’s my everything,” says Cowles. “My total support system.”

His fellow musicians sometimes show up to help — such as Burlington oncologist Peter Swift, a member of Cowles’ bluegrass band The Meat Packers, who’s currently visiting the office. The Meat Packers make regular appearances at orchard events, playing Cowles originals such as “Why Can’t Women Be a Little More Like My Truck?” and “Sensitive New Age Redneck.” The former has been played on NPR’s “Car Talk.”

Rednecks are a theme with Cowles. This October 17 at the Orchards is Truckload & Ginger Jack & Carboy Saturday — or, as he calls it, “Redneck Saturday.” On that day, folks can load their pickups with apples for $50. It’s preceded by the Orchards’ more sedate October 15 and 16 Senior Days, when you can get a deal when accompanied by an elder. “It doesn’t have to be a grandparent,” says Cowles. “You can just nab any old person. They’re kind of slow moving, so they’re easy to catch.”

Despite growing, picking and selling apples his whole life, Cowles says he’s only now beginning to feel secure that he’s “going to stick with it.” When asked what he’d do if he didn’t run the orchard, he goes silent for a good 30 seconds. “There’s probably a number of things,” he ventures, before suggesting stone masonry and “growing stuff.” But there’s stronger purpose in his voice when he says, “I don’t plan on ever retiring. I love what I do so much.”

Want to make a special trip?