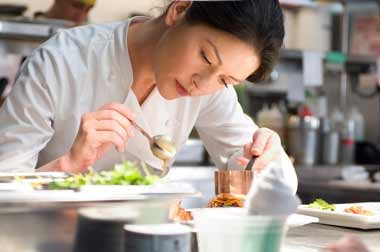 Most people go to therapy to deal with their daddy issues or to improve a troubled relationship. In the movie No Reservations, Kate, the main character and head chef at a trendy New York restaurant, goes to therapy so she can discuss her philosophy on the proper preparation of quails or try out a sexy new scallop recipe on a captive audience of one. She doesn't want to sleep with her shrink - he's played by the quirky Bob Balaban, after all - she just wants to cook for him. And she goes to see him because her boss, Paula, has threatened to fire her if she doesn't. Why? Her tendency to march into the dining room and harangue any customer who dares complain about the food.

This summer, moviegoers have been fed a thin but steady stream of films that go for the heartstrings via the stomach: Waitress, Ratatouille and now No Reservations, a remake of the 2001 German movie called Mostly Martha. The mere fact that an American studio saw fit to rework a small German film just five years after its release is a testament to the public's growing appetite for foodie flicks.

Unfortunately, the Hollywood remake doesn't go down as well as the original.

In No Reservations, Kate (Catherine Zeta-Jones) is a perfectionist and a control freak. Because people can't be managed and manipulated like stuffed lobsters, she's cut herself off from them. Kate hasn't been in a romantic relationship for years, she confesses. During "family meal" - when a restaurant's staff comes together to eat before customers arrive for dinner - she does the New York Times crossword puzzle rather than gossip and laugh with her co-workers. Night after night, she arrives home to a poignantly empty answering machine. Nowadays, people in Kate's income bracket are far more likely to opt for voicemail or cellphones, but as with much else in the film, the lonely "beep . . . you have no new messages" is used for effect.

Kate's solitary existence is soon interrupted by the untimely death of her sister, which leaves her responsible for her 8-year-old niece, Zoe (Abigail Breslin of Little Miss Sunshine). She needs time off to care for her new charge, and restaurant-owner Paula, portrayed by the convincing Patricia Clarkson, hires a wacky new chef to take up the slack. Needless to say, Kate struggles with her new role as parental unit and resists the kitchen encroachment. Meanwhile, though, she begins to fall for the relaxed, croc-wearing sous-chef, Nick (Aaron Eckhart).

Breslin's Zoe is adorable, whether her big blue eyes are filling with tears or she's saying just the right thing. "You're trying too hard," she explains helpfully to Kate. And "You're not doing everything wrong," when Kate briefly despairs of juggling the demands of working motherhood. The character is saccharine, when she should be bracingly sweet.

The original German film, Mostly Martha, is more complex and understated. In both versions, though, almost all of the character growth takes place over food. Unsure how to bond with her niece, Kate/Martha gives her the form of nurturance she understands best - which, in the American film, includes a fish with its head still on. No wonder the kid scarfs down a bowl of Nick's pasta on her first visit to the restaurant's kitchen.

In the end, though, food does warm the souls of these characters. Zoe gains confidence and remembers how to smile when she accompanies Kate to the restaurant and begins to learn to cook. She bonds with Nick over the aforementioned noodles. And of course, Nick and Kate get cozy over a Tupperware container of his homemade tiramisu.

In Mostly Martha, it took more than a few great meals to create a family. But the American version removes its harder questions - like whether the workaholic chef really can or should take on this responsibility. (The niece in Mostly Martha has a dad, albeit an estranged one, and hence another potential guardian.) In No Reservations, Kate tearily reads aloud a letter from her sister, written soon after the girl's birth, in which the now-deceased woman explains that Kate is the only one who could possibly raise Zoe in the event of her death. How convenient - now it's a foregone conclusion that the über-chef has to learn how to be an über-mom, too. And the script hastens us on to Kate's all-important romantic intrigue with her tousled and cheerful sous-chef.

As you'd expect in a romantic comedy, Kate doesn't take to Nick right away. She's affronted that he was hired without her say-so, and fears that he'll try to usurp her hard-won role as head chef. To make matters worse, the rest of the staff eats up his laid-back approach in the kitchen, which only serves to make Kate feel more like the drill sergeant she is. Here's where No Reservations takes more than a little poetic license with its setting. No real chef would stop work during the dinner rush to imitate Pavarotti.

Inevitably, the two opposites are drawn together. Nick scores points by having the patience to teach Zoe some basics. It's not long before she professes to "prefer Italian," Nick's cuisine of choice, to the truffled birds and seared scallops with saffron sauce that are Kate's specialties. When Zoe coerces Kate into inviting Nick for dinner on a day off, the two "kids" force the uptight chef to relax while they hand-stretch dough for pizza. The trio eat with their fingers, "safari style," in a tent amid Zoe's stuffed animals, followed by a rousing game of pick-up-sticks played with skinny breadsticks. That night, when Zoe falls asleep, it's Nick who tucks her in.

Once the child is asleep, it's time to work on getting Kate into bed, albeit in a less innocent fashion. Although many of the romantic moments seem contrived - as when Kate gets a bit of tiramisu on her face and Nick wipes it off, then licks it from his finger - the most sensual one does involve food, namely a pot of stock and a blindfold.

The cheesy dialogue spoils it, though. Nick says, with all the wisdom of a Harlequin romance, "It's OK to let people in sometimes." Thanks. Using food as a metaphor for human affairs is an old literary device, but in this script, it's like being slapped across the face with a raw steak. Kate reflects, "I wish there was a cookbook for life," to which her unnamed therapist replies, "It's the recipes you create yourself that are the best."

Ultimately, No Reservations isn't an accurate measure of the country's appetite for culinary cinema, because it's more junk food than haute cuisine. Perhaps a better indicator is the fact that Ratatouille - a far superior food movie - has raked in more money so far than testosterone-fest Live Free or Die Hard. To be fair, though, I might have enjoyed the movie more if I hadn't seen Mostly Martha first. Where the German film is quiet and restrained, allowing the audience to plumb their own emotions, the American movie hands the details to us on a pretty, but predictable, platter.