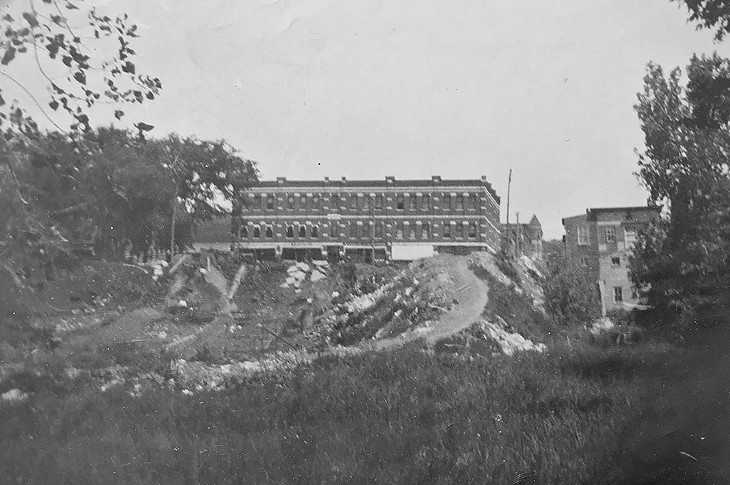 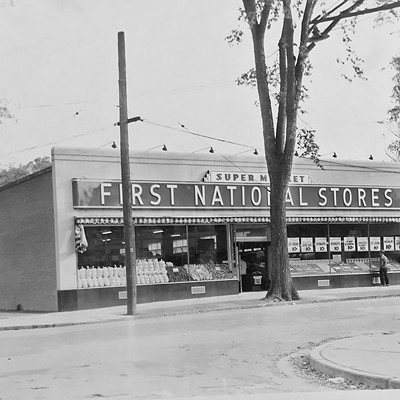 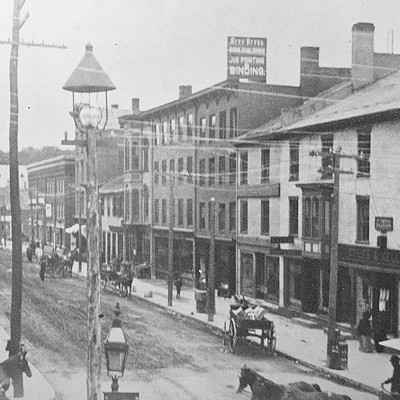 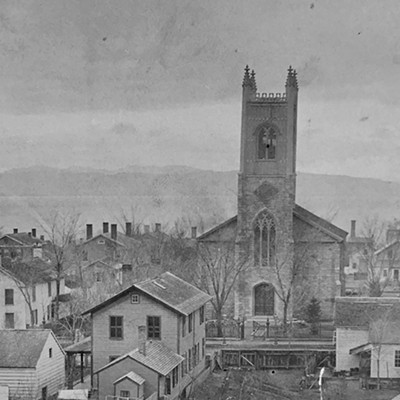 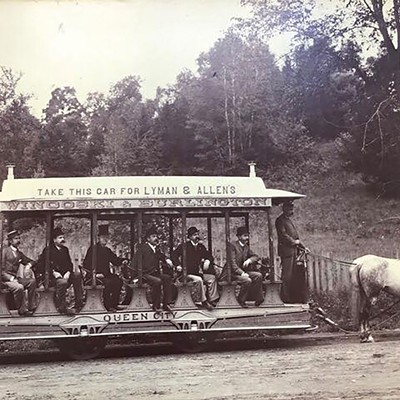 Did you know that, about a century ago, a huge ravine ran right through the middle of Burlington? Until the early 1900s, if you started where the Main Street bar Esox is now and headed south, you would tumble a good 25 feet, almost straight down, by the time you reached the present site of the "Democracy" sculpture across the street.

And did you know that, in 1791, 91 towns in Vermont had larger populations than Burlington (at 322 residents)? However, it didn't take long for Burlington to become the Queen City — which is the nickname for any city that is the largest in its state but not the capital, BTW. By 1835, Burlington was the most populous municipality in Vermont, and it has remained so ever since.

Speaking of numbers, did you know that in 1940 there were six commercial bowling alleys, housing a collective 47 lanes, within Burlington city limits? (Currently there are zero, though St. Mark Catholic Church on North Avenue does have eight private lanes in its basement.) If you had phoned New York City from one of those alleys during that decade, it would have cost 90 cents for three minutes. On the plus side, you could have rung Milton for just 15 pennies.

If you did happen to know any of those BTV trivia tidbits, you're probably either a historian or a member of the Facebook group Burlington Area History. That rapidly growing online community offers educational rabbit holes as deep and intriguing as the storied tunnels under Burlington itself. (What's that, you didn't know about the tunnels? Dude.)

Burlington Area History is the brainchild of Bob Blanchard, who founded the group in September and is largely responsible for its seemingly bottomless repository of photos and well-researched text. The 68-year-old grew up in Burlington's South End and now lives in St. Albans. Though he graduated from the University of Vermont with a degree in history, the retired U.S. Customs Service worker never put that degree to professional use.

Until recently, Blanchard hadn't given much thought to local history, and he says he can't recall what prompted his deep dive into Burlington's yesteryear. But he admits to being long intrigued by the city's gilded age, when the bulk of Burlington's Hill Section mansions were built.

"I always was kind of fascinated by, for the size of Burlington, how much money was here," he says. "This place is not that big, but there were a lot of wealthy people here."

There were also lots of folks who left Burlington to make fortunes elsewhere and whose names grace local buildings and institutions — John H. Converse and John P. Howard, for instance.

"Burlington really punched over its weight for many years," Blanchard says. "As a result, there are all these beautiful structures here. And Burlington is pretty fortunate that most of them are still standing."

Burlington Area History is far from the only Facebook group devoted to local history; several others cover Vermont history, and a handful focus on individual towns. Before he branched out on his own last year, Blanchard contributed regularly to another group, but he found that his long, narrative-style posts weren't always a great fit. So he launched his own group, hoping to find people similarly interested in exploring the city's history.

As of this writing, Burlington Area History has more than 3,300 members. That's an average of 140 to 150 new members a week.

"What's interesting to me is how many young people are joining," Blanchard says. He explains that members of the previous group he belonged to were mostly retirement-age people waxing nostalgic about long-gone landmarks such as Magrams department store, the Strong Theatre and the old St. Paul's Cathedral. While he concedes that his group's most active members tend to fit that description, he's tickled by the surge of interest among younger people. 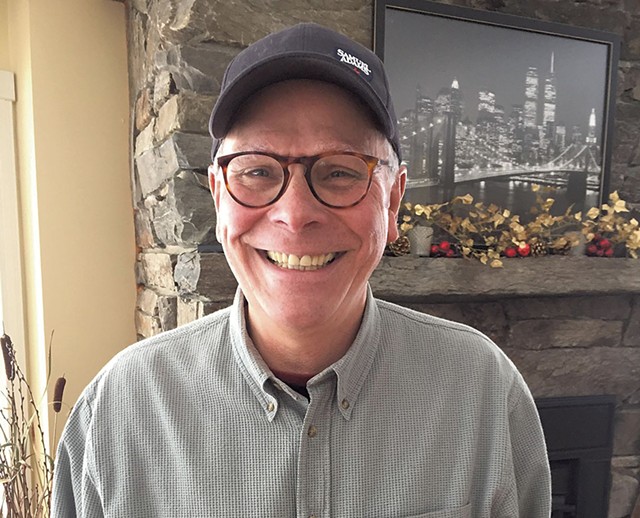 Any member can post to Burlington Area History, provided the content is of general, rather than personal, interest — that is, no old family photos, please. Many members do post images and memories, often leading to lively discussions about departed people and places and spirited debates about who and what was where and when.

But what distinguishes Burlington Area History from similar groups is Blanchard himself, who prides himself on unearthing items that members might not have seen before. He's a regular visitor to the special collections at the University of Vermont and Champlain College and to the Vermont Historical Society, where he scours non-digital archives for fresh finds.

But Blanchard's brilliance isn't solely in the rare images he uncovers; it's in the context he provides for them. "You can take something as mundane as a sewer line and make an interesting post out of it," he says.

Almost all of Blanchard's posts highlight details that evoke the texture of daily life in Burlington through the years, often corroborated with info from the archives of the Burlington Free Press. Recently, posting a photo of Main Street with antique cars and men on bicycles, he noted the movie advertised on the Flynn Theatre marquee in the background: My Friend Flicka, which came out in 1943.

His research often helps date a photo. In an old shot looking up College Street, Blanchard noted a Winooski and Burlington Horse Railroad Company horsecar — essentially a horse-drawn trolley — on the busy thoroughfare. That placed the photo between 1885 and 1893, the only period when those public-transit vehicles traveled Burlington streets.

"It boggles the mind," says Mary Ellen Claremont, one of the longest tenured and most active members of Burlington Area History. "Every day something new comes out, and your mouth is agape. The history just doesn't end. There's always something more."

Claremont, who raised her family in Burlington before retiring to Colchester, says she's made friends and other real-life connections through the group. Having spent most of her adult life in the area, she enjoys the daily nostalgia trips. But more than that, she believes Burlington Area History can help us appreciate, and perhaps preserve, the city's present.

A recently posted photo of the original St. Paul's Cathedral, which was destroyed by fire in 1971, caused Claremont to consider the recent development along St. Paul Street, where the majestic church once stood. From there, her thoughts drifted to the redevelopment of City Hall Park and, of course, the bedeviled CityPlace Burlington pit.

"It's nice to reminisce about what was," she says. "But seeing the old architecture, the detail in so many of the buildings we've lost — it also really opens your eyes."

Sean Moran agrees. Like many Burlington Area History members, he grew up in the area and left to pursue his career. Now an actor, he splits his time between Vermont and Los Angeles. Moran's grandfather was former Burlington mayor J.E. Moran — namesake of the Moran Plant.

Moran echoes Claremont's sentiment that Burlington hasn't always succeeded in preserving its past, citing the transformation of grand hill manses into frat houses and thoughtless downtown developments. Burlington Area History, he suggests, is a reminder not just of the past but of what's at stake as the city contemplates the fate of landmarks such as Memorial Auditorium — or of the long-debated waterfront building that bears his surname.

"I don't think we have reverence," Moran says, "so I love seeing what Burlington was through Bob's page."

"As we get more members, I hope that people stop and think, How can we incorporate what we have?" Claremont says.

"I've always felt that Burlington was really something back in the day," Blanchard says. "Certainly, it was a very different city, architecturally." Like Moran, he's concerned about what could happen to relics of that older architecture, such as Memorial Auditorium.

"People seem to be really more in tune to architectural preservation [than they used to be], though money is always a factor," Blanchard says. "But what people don't seem to really understand is that, once you tear these old buildings down, they are literally not replaceable."