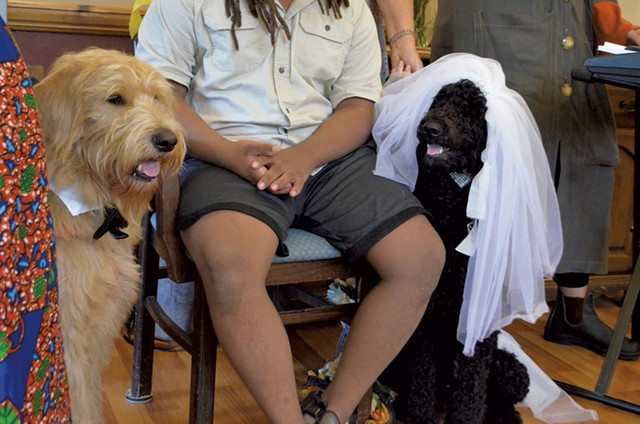 The bride wore a lacy dress and veil but no shoes. The grinning groom sported a bow tie and, well, not much else.

No one in attendance seemed to mind: It was a dog wedding, after all.

The Saturday ceremony at the Ethan Allen Residence on North Avenue in Burlington brought together Flossie, a black standard poodle, and her beau Boy, a tan labradoodle.

"You guys are making out a lot already," cracked officiant Susan Herrick once the pups made it to the makeshift altar inside the assisted living facility's cafeteria. She doubles as the home's music therapist.

The dogs belonged to Maleka Clarke, Ethan Allen's director of nursing. She and others spent months planning the ceremony. Both pups are about a year old, and they act as unofficial therapy dogs for the residents and their families.

The event turned into a shotgun wedding when Clarke found out Flossie was pregnant. Instead of derailing the ceremony, the puppies — just two weeks old — were in attendance; some of the residents held the tiny fur balls as they watched the proceedings.

"This is the best place to have too many dogs!" Clarke said. She plans to give the puppies away, while the parents will stay with her and continue to work as therapy dogs.

In the decked-out "chapel," dog-themed cupcakes, treats and drinks awaited celebrants, some of whom sat in wheelchairs. The wedding featured songs including "How Much Is That Doggie in the Window," readings and hymns led by Herrick, who wore puppy ears and played keyboard.

Before the dogs "said" their vows, two residents read poems. Sig Samuelsen, 90, took the microphone and recited "A Dog Song," by Mary Oliver.

"What would this world be like," it concluded, "without dogs?"

The original print version of this article was headlined "Dog's Day"