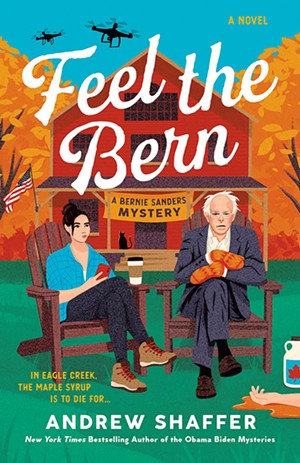 A new novel due out in December puts U.S. Sen. Bernie Sanders (I-Vt.) at the center of a "cozy" murder mystery.

The novel, Feel the Bern: A Bernie Sanders Mystery, falls into the same subgenre as works by Agatha Christie, according to Kentucky-based author Andrew Shaffer. It takes place in fictional Eagle Creek during leaf-peeping season. Tranquility is upended when the body of a banker linked to "Big Maple" is found in Lake Champlain.

If that isn't Vermonty enough, the novel also features Champ sightings; jokes about Boston tourists, flannel and weed; and a book cover featuring Sanders in his famous mittens, perched in an Adirondack chair.

"It doesn't treat Bernie's philosophy as a joke; it doesn't treat him as a joke," Shaffer said. "But he gets into humorous situations. There's a golf-cart chase at one point."

This sort of writing is Shaffer's shtick. He made it as a bestselling New York Times author for his 2018 book, Hope Never Dies: An Obama Biden Mystery, which he described as a bromance noir novel. He was casting about for his next blockbuster when he landed on Sanders, for whom Shaffer gained appreciation in recent years.

"I guess you could say I came to Vermont in a roundabout way," Shaffer said. "I had an idea to do a book called Hillary Clinton: Pet Detective, and my editor and agent were like, 'No, absolutely terrible idea.'"

Shaffer had never visited the Green Mountain State until he booked a weeklong stay in North Hero in the summer of 2021. Sanders has a lake house there, but Shaffer never crossed paths with the senator. He did, though, catch a Lake Monsters baseball game and gleaned what he could about the locals.

The book is "a love letter to small towns," said Shaffer, who grew up in an Iowa one. Like other "cozy" mysteries, Feel the Bern includes some regional recipes.

So did the title character give it two thumbs up? Shaffer says the novel is unauthorized, though he hopes Sanders gets his mittened hands on a copy.

"It's parodying the mystery genre, sort of," Shaffer said. "It's not making fun of a politician or anything. It's a little bit different than people might expect."