A Dance to Remember: 'Lonesome Bend' 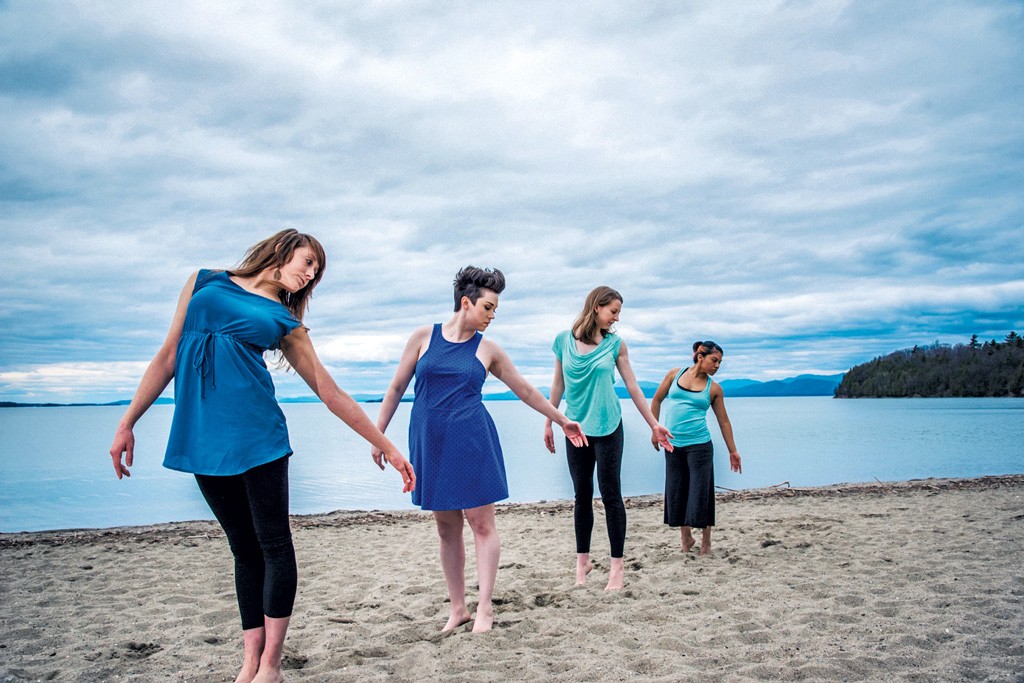 Under the dammed waters of the Wrightsville Reservoir in Middlesex, just north of Montpelier, lies a story of flood and displacement. Heather Bryce, artistic director and founder of Bryce Dance Company, will offer viewers a closer look with "Lonesome Bend," a one-night performance on the beach of the Wrightsville Beach Recreation Area.

The site-specific, multimedia performance references two natural disasters: the epic flood of 1927, which prompted construction of the dam, and, more recently, Tropical Storm Irene. The performance is funded in part by grants from the Vermont Arts Council and the National Endowment for the Arts.

Bryce began conceptualizing the piece about five years ago while helping event planner Megan Schultz clean up after Irene. "We were sorting things into different piles," Bryce says, recalling how she helped her friend inventory the wreckage of her home and office in Moretown.

Around the same time, Bryce began researching the history of the reservoir and discovered that, prior to the flood of 1927, which heavily impacted Montpelier and claimed 84 lives throughout Vermont, the area was occupied by the small communities of Wrightsville and Lonesome Bend.

When the Civilian Conservation Corps arrived in 1933 and began building the dam that would protect downstream populations from future floods, residents of Wrightsville and Lonesome Bend were forced to move. "I think a lot of people don't know [those communities] existed," Bryce comments. "[Most people] see it as a recreation area that they use for fun. Remembering what happened in this space matters."

Bryce Dance's community company — a multigenerational group of "movers" — will perform the 35-minute composition "Lonesome Bend." While developing the show, Bryce prompted the movers to think about core concepts: the idea of home, what it would feel like to be displaced and the experience of water taking over. From those prompts, the piece evolved "holistically," with Bryce acting as a "producer and a facilitator, [helping them] put the pieces together," she says.

The performance will begin with dancers leading a 15-minute tour of the area. Once the audience is settled onto the grass by the beach, Bryce will open the piece with a solo backed by a prerecorded oral history of the site. Next, Bryce and dancers Denise Townsend, Elizabeth Leahy and John Bennett (also members of Bryce's professional touring company) will perform a series of duets that investigate the concept of home and set the stage for the pending disaster.

In one scene that follows, movers give their literal spin on the flood by rolling down the hill that leads to the beach. Their blue-and-white costumes, constructed mainly of everyday clothes, effectively imitate waves. In another, performers gather household objects, such as books and kitchen implements, from the water, placing them in piles, discarding them or slipping them into large pockets tied around their waists, referencing the experience of sorting through the contents of a destroyed home.

Meara McGinniss sewed the pockets and created a number of other visual props for the production. Her shoulder-high white tents and two-foot-tall cloth houses will be scattered along the beach. Silhouettes will be placed inside, creating illusions of people inhabiting the "homes."

"The site-specificity of the piece drew me in," McGinniss says via email, "especially its history — which is complicated. The series of cloth houses and tents really cry out to be danced with."

Her installations also reference the Civilian Conservation Corps members who lived in tents — some until December — while they built the Wrightsville Dam, and others on the Winooski River, after the 1927 flood.

The musical score, composed by Andric Severance, is performed by Caleb Bronz on drums, Craig Myers on ngoni (a West African string instrument), Severance on keys and Geoff Kim on clarinet. It includes excerpts from interviews with Schultz and a survivor of the '27 flood, who asked to be identified only as Susan. She was 4 when the rising floodwater forced her family out of its Waterbury home. "Everybody was scared; we thought the whole town was going," Susan says in the interview. "There was terrible damage. People lost their homes. People lost their lives."

Following the community company's performance, the professional troupe will perform Bryce's "Breathing Underwater," a 12-minute piece with an original score by New Hampshire musician Jason Beaudreau. The work deals with loss and grief, and adds new dimensions to ideas fleshed out in "Lonesome Bend."

Both performances are as much about struggle and rebuilding as they are about loss and devastation — physical and emotional. In a 15-minute postshow Q&A session, Bryce will ask the audience about their reactions to the site, the performance and their experiences with Irene or the earlier flood. "Another huge flood could happen," she says. "So what's our relationship to helping and supporting people who are affected by that, and how can we be more present?"

The original print version of this article was headlined "Dance to Remember: Floods, Loss and Rebuilding at Wrightsville Reservoir"