A Dance About Death, and Life, With Humor 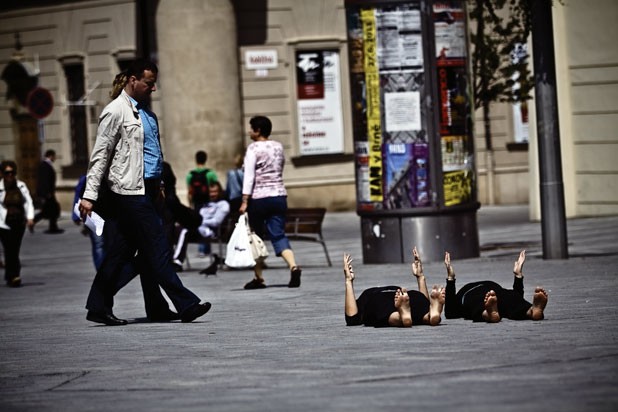 The latest dance-theater work from choreographers Lida Winfield and Ellen Smith Ahern, Long Gone, springs from one simple concept: All of us come from a long line of dead people.

In their evening-length piece, which debuts at FlynnSpace this weekend, the duo, who collaborated in Vermont for several years — and have continued to create work together after Smith Ahern moved to Long Island last year — use movement and storytelling to explore memory, lineage and death.

“You know when you look at a photograph of people who maybe you never knew, who aren’t alive anymore?” Winfield says. “You have a story you make up in your head of what happened: where they were, who they were, what they said, how they stood.” The pair wanted to explore the effect of that phenomenon, how those thoughts about the people who came before us become part of our memories — and our identities.

When Winfield and Smith Ahern began working on the piece a year ago, they looked to their own families for inspiration. But soon they realized they needed to broaden their perspective if they wanted to strike a more universal tone. So they held storytelling workshops in which they encouraged participants to dig into their own memories. Some of the resulting images and concepts made their way into Long Gone. So did audio recordings of Smith Ahern’s grandparents and an intriguing sequence the choreographers call the “death song.”

It was important to both Winfield and Smith Ahern that this death-centric work wasn’t just doom and gloom. “We all know people who are dead who were terrible,” offers Winfield wryly. They took on the challenge with a sense of humor: “Could we make a piece about death that wasn’t exclusively about loss? And could it be not heart wrenching? Could it be funny and awkward?”

In one solo piece, Smith Ahern re-creates a visit to a grieving friend’s house, armed with lasagna and an arsenal of socially acceptable condolences. “But when the person opens the door and their father just died, and you say, ‘I’m so sorry for your loss,’ the words can feel really flat, or weird,” Smith Ahern says. “They don’t begin to cover the loss.”

Another piece is inspired by Winfield’s own story of losing a loved one as a teenager. The scene plays out, she says, after “the funeral is over and everyone’s gone.” Like many a tormented teen, she blares Led Zeppelin and decides she’ll never survive.

And then she has an epiphany. “I wanted a bagel and a cup of coffee,” Winfield recalls. That simple craving “was a reminder of how good it is to be alive, how amazing it feels to survive hardship, how powerful that is.”

Long Gone looks back on those who have died, but it also celebrates the joy of living. After all, for most of the time the work was in development, Smith Ahern was pregnant. That offered poignancy — not to mention a whole new movement vocabulary — to the dances.

“It was really interesting to make a piece about death while Ellen was making a baby,” Winfield observes.

“My immediate thought was that it was going to be a real hardship in the creation of this piece,” adds Smith Ahern of dancing with a pregnant body. “Actually, it turned out it was kind of a gift.”

Long Gone by Lida Winfield and Ellen Smith Ahern, at FlynnSpace in Burlington. Saturday and Sunday, September 15 and 16, 7 p.m. $16/20. The artists lead a dance and storytelling workshop at the Flynn’s Chase Dance Studio on Friday, September 14, 5:45 to 8:15 p.m. $25. flynntix.org