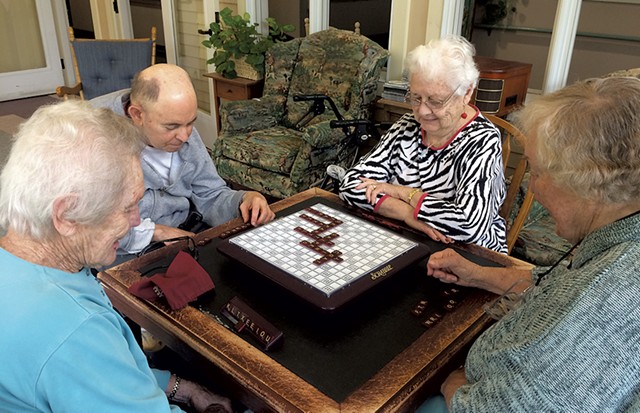 A senior care facility in the Northeast Kingdom is looking to cut costs by asking the community to pitch in some power.

Not people power but electric power, preferably generated by the sun or wind turbines; think crowdfunding for the renewable set. The initiative could help the nonprofit Craftsbury Community Care Center save on its utility bill, which adds up to some $16,000 to $20,000 annually, according to executive director Kimberly Roberge.

"We've been going through some challenges over the last few years of trying to find ways to increase our income because expenses are rising," she said. "Unless you raise the rates for residents, there's not a lot of opportunities for new funding."

So how, exactly, does one donate electricity? According to Ted Ceraldi, a care center board member who came up with the idea, it's simple. A donor must be on the Hardwick Electric Department grid, which serves more than 4,300 customers in 11 Northeast Kingdom towns. Someone interested would then get in touch with the department and ask to become a "group net metering entity," which would allow them to donate to the center a chosen percentage of the power they generate.

The gift is tax deductible, according to Ceraldi, and is legally allowed by a Vermont Public Utility Commission regulation.

The center has looked into erecting its own solar energy system, according to Roberge, but its roof is not ideal for such a setup and the expense is prohibitive. Meanwhile, Ceraldi said, some solar arrays, including ones at second homes, which can be vacant for weeks or months, generate more power than the owners use.

Ceraldi spoke to Sen. John Rodgers (D-Essex/Orleans) about broader application of the concept.

"I said to him, 'Why don't you take it statewide?'" Ceraldi said. "'Maybe you can get people to donate power to other nonprofits and/or hospitals and schools.' It would be wonderful."

The original print version of this article was headlined "Power UP"