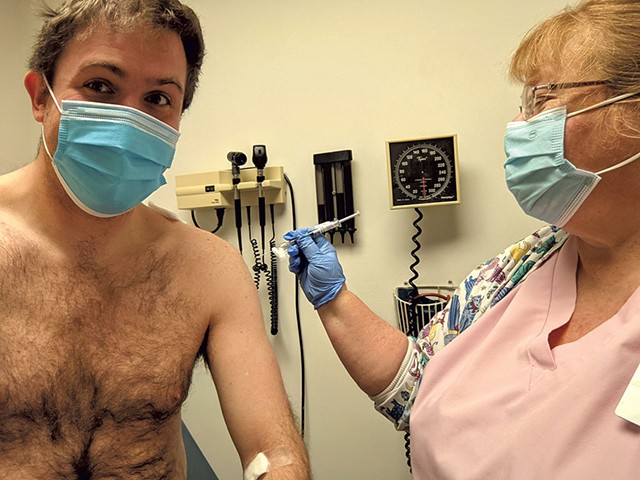 Joshua Schupp-Star can give you many reasons why he volunteered to join the clinical trial of an experimental COVID-19 vaccine at the University of Vermont's Vaccine Testing Center. All can be summarized in one word: hope.

"After receiving my first dose, I got a taste of the freedom that existed before the pandemic," said Schupp-Star, who is among the 284 volunteers in Vermont to receive an as-yet-unapproved vaccine made by British-Swedish drug manufacturer AstraZeneca. "It's such a liberating feeling to walk around in the community knowing that my body had some protection against the virus that has caused so much suffering in the world."

Schupp-Star has seen some of that suffering firsthand. The 39-year-old Saratoga Springs, N.Y., native lives with his wife and 4-year-old son in South Burlington, which, like the rest of Vermont, has been far less affected by the pandemic than most other places in the country.

"There were patients we talked to who lost four or five family members." Joshua Schupp-Star tweet this

But Schupp-Star has spent much of the last year in the Boston area, where he's finishing his clinical rotations to become a physician assistant. For months, he worked at the Whittier Street Health Center, a clinic in Roxbury, Mass., that serves a racially diverse and predominantly low-income and immigrant community that's been hit hard by the coronavirus.

"There were patients we talked to who lost four or five family members," Schupp-Star said in an interview last week.

Many of his patients tested positive for COVID-19 themselves or were still recovering from it. Some suffered from what he called "long COVID," a condition in which symptoms linger for weeks or months.

One of Schupp-Star's patients who contracted the disease last February was still experiencing symptoms seven months later. Once, when the woman experienced fatigue, heart palpitations and shortness of breath after exercising, she called 911, only to have EMS personnel dissuade her from going to the hospital. According to Schupp-Star, they told her she'd need to be put on a ventilator, which at the time were in short supply, and that she'd be better off staying home.

So a few months ago, when Schupp-Star read that the UVM testing center was enrolling more than 3,100 volunteers for its phase 3 clinical trial of the experimental AstraZeneca vaccine — from which 284 ultimately were chosen to get dosed — he leapt at the opportunity.

The first and most obvious reason, he explained, was to protect his wife, son and other members of the community from a disease that's killed more than 400,000 Americans, including at least 163 Vermonters. Because Schupp-Star travels back and forth to Boston each week, "I don't want to be the reason why a lot of people in Vermont get sick," he said.

Another motivation for volunteering, Schupp-Star noted, was the large number of people he encountered at the Roxbury clinic, including fellow medical staff, who told him they didn't plan to get the COVID-19 vaccine once it became available.

Schupp-Star didn't challenge his patients' or colleagues' vaccine skepticism. He suspects that some of their wariness and distrust, especially among people of color, stems from the U.S. government's infamous "Tuskegee Study of Untreated Syphilis in the Negro Male." From 1932 to 1972, public health researchers deceived hundreds of impoverished Black men in Alabama into believing they were receiving free treatments for syphilis when, in fact, they were not. Many died of the disease or associated complications.

Even though Black Americans have been disproportionately impacted by the pandemic, dying at a rate nearly three times that of white Americans, many remain skeptical of governmental assurances about vaccine safety.

Because Schupp-Star was working in a community with a large population of New Americans, including many from the Caribbean, he wanted to serve as "an ambassador" for the new vaccine and demonstrate its safety by putting his own health on the line.

Schupp-Star admitted that, initially, he had some mild trepidations of his own. Early on in the pandemic, there was concern that some blood pressure medications, including one he takes, could make him more susceptible to the coronavirus. However, other research suggested that such drugs might even reduce the severity of COVID-19 symptoms. Either way, Schupp-Star's underlying health condition didn't disqualify him from the study, and he noted that it would provide useful data to AstraZeneca's researchers.

Still, being a vaccine volunteer is not without inherent risks. Last September, AstraZeneca briefly halted its phase 3 trial when two female participants developed neurological problems after getting dosed. Both cases were later linked to previously undiagnosed conditions; researchers believed the women's reactions were not caused by the vaccine itself.

To date, no Vermont volunteers have experienced severe adverse events — that is, hospitalizations or deaths — according to Dr. Beth Kirkpatrick, founding director of the UVM Vaccine Testing Center.

So, on November 20, Schupp-Star drove to Essex Junction to receive the first of his two doses. Because the trial is a double-blind study, neither he nor the person administering the shot knew whether he was getting the actual vaccine or a placebo. (According to Kirkpatrick, two-thirds of the study's 30,000 participants nationwide received the real vaccine, divided equally between men and women.)

But Schupp-Star soon had a hunch that he'd gotten the real one. Six hours later, the injection site on his left arm still hurt. The following day, the entire left side of his body ached, as though he had done a strenuous workout the day before. As he put it, "I was very happy that I had a pain in the ass."

There was a strong psychological side effect, too. Schupp-Star said that the first three days after his initial dosage felt "incredibly liberating," though he was still careful not to let down his guard and stop social distancing, washing his hands or wearing a mask. When he was told that the vaccine wouldn't fully protect him until he got the second dose, "I was like, OK, I'm not out of the woods yet," he added.

Four weeks later, Schupp-Star returned for round two. This time, the shot left him with only a mild ache in his arm and what he described as a persistent but manageable headache that lasted two or three days.

In early January, Schupp-Star went back to Boston for his final year of clinical work at Massachusetts General Hospital. Like other students at the hospital, he was offered a different COVID-19 vaccine, one which already had been granted emergency use authorization by the U.S. Food & Drug Administration.

This posed an interesting ethical dilemma: Because Schupp-Star wasn't certain that he had received the real vaccine, and knowing that the second, already-approved vaccine was 95 percent effective, should he accept the second vaccine before millions of other Americans had gotten one?

As Kirkpatrick at the Vaccine Testing Center explained, this is why the AstraZeneca team allows trial participants to be "unmasked" — that is, to find out which shot they got.

"If people received the placebo in the AstraZeneca trial, the decision is clear," she explained. "We say, if you're willing to take that other vaccine, please take it, because that's our goal, to get people protected ... It's not fair to ask them to stay with the placebo, because they remain at risk for COVID."

Thus, Schupp-Star was unmasked and his suspicions were confirmed: He had gotten the real McCoy. But even though he was still eligible for the FDA-approved shot, he opted not to take it.

"Of course the thought crossed my mind ... given all the fears regarding COVID, but this didn't last long," he said. "I'm feeling pretty good about my immune status."

Schupp-Star's involvement in the trial isn't over yet. For the next two years he'll be keeping a diary on his cellphone to report any COVID-19-related symptoms. He's also getting his blood drawn every month, which looks for the titer, or presence and concentration, of coronavirus antibodies.

Schupp-Star plans to continue serving as a vaccine "ambassador" by talking about his own experiences publicly, perhaps even including it as part of his standup comedy routine. Before pursuing a career as a PA, he was a four-time finalist in Vermont's Funniest Comedian competition. While definitely not looking to make light of the deadly pandemic, Schupp-Star emphasized, he might incorporate his experiences in his routine.

"I want people to know that there is light at the end of tunnel — and it feels good to be on this side," he wrote in a follow-up email. "Life may never go back to the way it was, but I do think we will have a chance to live our lives in relatively less fear."