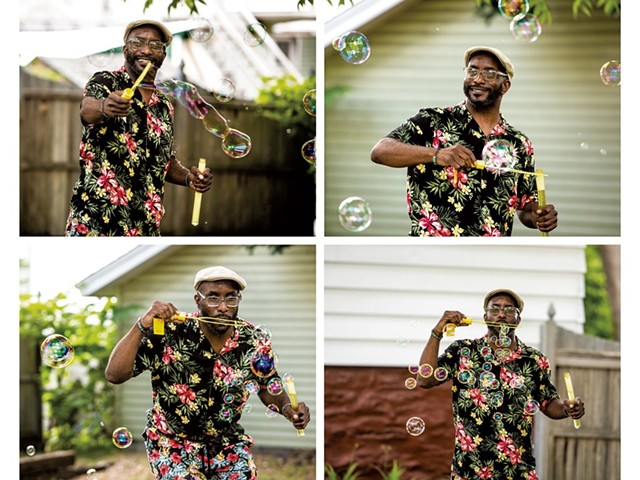 What follows are distilled quotes from a conversation with Burlington resident Rajnii Eddins, a poet, facilitator, activist, teaching artist, founder of the Poetry Experience at Fletcher Free Library and author of a poetry book, Their Names Are Mine, that aims to confront white supremacy. As the artistic director for the Young Writers Project, Eddins co-coached the internationally acclaimed Muslim Girls Making Change, the first team to represent Burlington in the Brave New Voices International Youth Poetry Slam Festival. Eddins says he sees art and youth engagement as a dynamic, transformative tool for social change.

On growing up with a strong mother:

My mother is a profound influence in my life. She was the founder of the first Black writers group in the Northwest, known as the Afrikan American Writers Alliance. I was performing with them at age 11.

She would have me read her pieces back to her — her poetry, her stories — and she'd say, "Read it with feeling. Give the language flavor." That gave me a real solid base of exposure to see what you could do playfully with language.

[She] was a foster parent to over 70 children, so I was always the older brother. That was amazing because that gave me a natural way of engaging with youth.

She often says, "Children are treasure." That echoes throughout my childhood.

On art as a means of survival:

I've seen countless youth who have gone through pretty horrendous, traumatic experiences find an outlet and a window and a survival mechanism through their artistic expression. That then, in turn, begins to inspire their peers, and it becomes a way of living and engaging in their lives. As they grow into adults, they're able to extend that same raft to the next folks. I feel like that's a crucial component of artistry. This can be a foundational basis for how we can transform the world, starting with our own families, starting with the youth and how you offer them a keen reflection of themselves.

On his outlook on life:

It's harder to judge somebody or stereotype them or put them in a box when you've heard their story.

I'm kind of from the James Baldwin school. I'm alive, so of course I'm an optimist. I refuse to throw in the towel. I think that, even when it hurts to speak the truth for the speaker and maybe the people who hear it, you need to hear the truth.