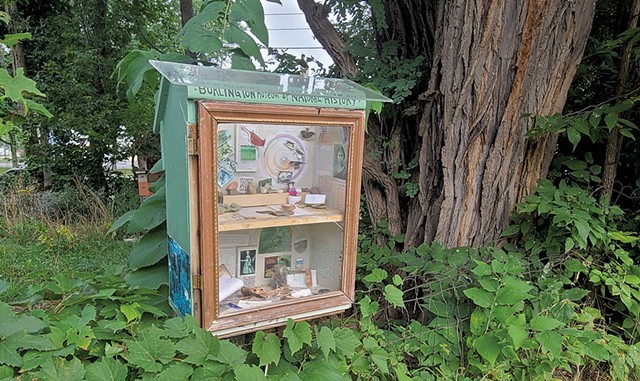 Compared to museums in other parts of the country, Vermont's tend to be relatively small. But the Burlington Museum of Natural History, a sidewalk shadow-box installation measuring about two cubic feet, makes small institutions such as the Rokeby Museum or the Montshire Museum of Science look massive by comparison.

Its origin story is fairly short. As an abstract joke apropos of nothing, Old North End resident Meghan O'Rourke's teenage son marked their home at 145 Intervale Avenue on Google Maps as the Burlington Museum of Natural History. But in the two years since the comic lark, O'Rourke took it upon herself to make good on the listing. She's curated a tiny yet impressive collection of artifacts and ephemera centered on the natural and cultural histories of Burlington, Lake Champlain and Vermont.

"It was really ... an exercise in learning about the place I lived," O'Rourke told Seven Days during an early morning "guided tour" of the collection.

The museum itself, which looks like a Little Free Library, is small, but its contents are big in scope. Fossils, plant samples, artworks, historical documents and maps clutter its two shelves. A striking phenology clock tracks the yearly life cycles of Vermont animals. Visitors can scan QR codes with their phones to read more online about the various exhibits.

"I'd love to have guest curators come in," O'Rourke said. She noted that researchers from various scientific communities are enthusiastic about her project.

The museum also introduces visitors to an Old North End scavenger hunt. It asks players to find the oldest house in Burlington, leaves in the neighborhood with serrated edges, and fossils embedded in imported stone curbs and walls. (For the last of those, head to the corner of North Champlain and Peru streets.)

It's difficult to gauge how many visitors stop by, though items frequently go missing. "Most of us just kind of pass through the landscape on our way from one place to another," O'Rourke said.

She hopes the museum will inspire locals to stop, look around and take in the natural wonders of the area — no matter how small.

Correction: South Champlain Street doesn't intersect with Peru Street, but North Champlain does. This story has been updated.

The original print version of this article was headlined "Sidewalk Stories"