A Close-Knit Village Works to Save Its Beloved Curtis Pond 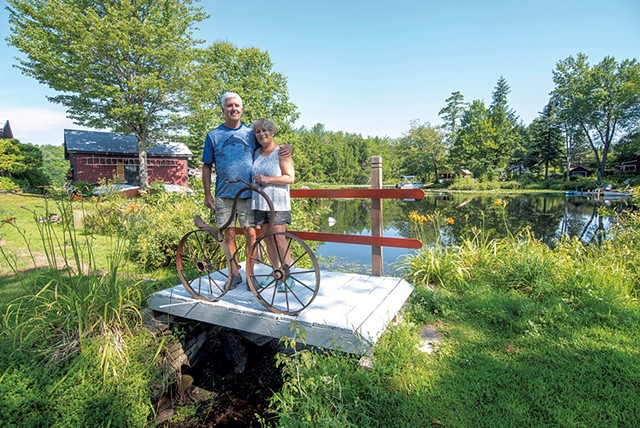 Curtis Pond was teeming with swimmers on an unusually hot day last week. Teenagers sunbathed on a public dock off a sandy beach, and children splashed around. A band of kayakers circumnavigated the pond's perimeter, pausing to admire the resident loon and her chick near a forested area of the beach. Aboard his pontoon boat, the Whammy Barge, Don Heise waved hello to a neighbor lazing on an inner tube. Residents relaxed in front of houses and summer camps dotting the shoreline.

This is the quintessential Vermont scene that in 1993 drew Heise and his wife, Bev, to move to Maple Corner, a village of 200 in the town of Calais. The couple purchased a home next to the dam that created 76-acre Curtis Pond. In summer, the Heises fish and swim in the pond. In winter, Don grooms a makeshift ice rink for pond hockey matches behind their house. Neighborhood children skate over and play until dark. Don used to host a festival on the ice in March during which curling players used kitty litter containers as makeshift curling stones.

In good times and bad, Curtis Pond is one of the places that reinforces the strong sense of community shared by residents of the tiny village. When the pandemic hit, Maple Corner residents organized "Dockstock," a traveling pontoon concert for residents who couldn't leave their pondside homes. Organizers were surprised when more than 40 kayakers also came to enjoy the music.

When Don's younger son, Coby, was diagnosed with stage IV laryngeal and mouth cancer in 2011, Maple Corner residents raised money to help pay for his treatment.

Soon, though, the pond may drain away. The Curtis Pond Dam, built in 1900 on a tributary to Pekin Brook, is rapidly deteriorating. Confronted with the possibility that the dam could collapse — and with no prospect of state money to fix it — Maple Corner residents have banded together to raise the dollars to save the well-loved water feature.

For more than 18 years, state engineers have classified the dam as a "significant hazard." Don said he's noticed it has a pronounced lean — as well as leaks.

In 2011, Tropical Storm Irene dropped so much rain that the pond flowed over the dam. Another major storm could easily lead to catastrophic dam failure and potentially cause significant property damage, according to a state-hired consultant firm, Schnabel Engineering.

And if that day came, the state would be unlikely to issue a permit to rebuild the structure. There is little state or federal money available to repair dams — and plenty to remove them. In fact, if a major storm such as Irene were even forecast, the Department of Environmental Conservation would likely drain the pond in advance as a precaution.

Either way, Curtis Pond would be reduced to two small ponds surrounded by mudflats and wetlands — not exactly what the Heises, and the other residents of Maple Corner, have long enjoyed.

More concerning, though, is the hazard the dam poses. Coby Heise lives downstream with his children. He worries that they would not be able to flee in time should the dam fail.

"The potential for disaster lingers in the back of your mind," Coby acknowledged. "I don't want to be surfing on my house down the road."

Despite the danger, nothing has been done to repair the dam in the 18 years since it's been deemed a hazard. No one has been eager to claim ownership of the structure, which the state says is in private, not public, hands. And in Vermont, the owners of private dams are responsible for their upkeep.

"Finally, we got everybody to realize it doesn't matter who owns it; let's get it fixed." Jamie Moorby tweet this

In 2003, former Maple Corner residents Jeff Fothergill and his wife, Candace Beardsley, were informed — much to their surprise — that they had inherited the dam from Beardsley's grandfather more than 15 years before. Shortly afterward, the couple filed a legal disclaimer of ownership. But a consulting attorney hired by the Town of Calais argued that the disclaimer was not filed within the required nine-month window after the date of inheritance.

"It's touchy. It's contentious," said Jamie Moorby, a sixth-generation resident of Maple Corner. "There's strong feelings. There's hard feelings. And, in the end, it doesn't matter."

That's because residents have decided the hefty dam-repair bill should be a shared responsibility — not one family's. They have formed the Curtis Pond Association's Dam Exploratory Committee, which is raising funds toward the likely $600,000 tab. Fothergill and Beardsley support the group's efforts.

"Finally," said Moorby, who is vice president of the association, "we got everybody to realize it doesn't matter who owns it; let's get it fixed."

Founded in 2017, the Curtis Pond Association is made up of an eight-person board and a makeshift army of neighbors. In 2019, the association created the committee dedicated to repairing the dam.

"Just having three people trying to do something, compared to a group trying to save a resource, is quite different," said Marge Sweeney, interim treasurer of the association. As extreme weather events garner national media attention, the committee has felt mounting pressure to get the dam fixed — and fast.

The first order of business was to convince the Calais Selectboard to take ownership of the dam once it is repaired and meets state standards. Moorby said it wasn't hard to demonstrate that the town would likely lose more money if it did nothing. Shoreline property values would be reduced by at least 25 percent if the dam broke, costing the town $86,000 a year in lost property tax revenue, according to Calais zoning administrator John McCullough.

The Dam Exploratory Committee has signed a memorandum of understanding with the Calais Selectboard. Essentially, it outlines a shared commitment to seeing the project through and ensuring that ownership is transferred to the town once repairs are complete.

The association is aiming to submit a permit application to repair the dam within the next few weeks. If it is granted, members will refocus all their energy on fundraising.

Members believe that if they can raise some of the money needed for repairs, Calais taxpayers would approve a bond covering the remaining cost. Moorby said the committee aims to raise between $200,000 and $300,000 in donations and grants.

Residents of Maple Corner have a history of getting creative when it comes to fundraising for local projects. In 2002, a dozen male residents posed nude, holding strategically placed chain saws and sap buckets, to raise money for their cherished but run-down community center. The images were the selling point of the "Men of Maple Corner" calendar, which made nationwide news and raised roughly $500,000. Those men decided to earmark some of the surplus funds from the calendar for other community projects, including $30,000 for future repair of the dam.

To supplement that, the Curtis Pond Association's fundraising schedule includes a summer concert series; the most recent concert drew $3,700 in ticket sales — and an audience of 150 to hear Bob Hannan & the Inflatable Aliens. Don Heise has started giving by-donation pontoon boat rides, with guests bringing wine and cheese to upgrade the experience. Pond supporters have raised $85,000 to date, closing in on their first-phase goal of $100,000 by the end of the summer.

The stakes are high, but for now, residents of Maple Corner are trying to blend their dam-saving campaign with fun. In addition to the concert series, the Maple Corner Community Store, which hosts a post office, restaurant and the Whammy Bar, is holding weekly Curtis Pond Fan Club social hours to help fundraise.

Moorby, who grew up playing in and around Curtis Pond, fears that losing the summer gathering spot would mean losing a way of life.

"People know Maple Corner from all over the state," Moorby said. "They come to the Whammy Bar. They come to swim in Curtis Pond."

Losing the pond, she said, would be "just unfathomable."

Rachel Hellman is a corps member of Report for America, a national service program that places journalists in local newsrooms. Find out more at reportforamerica.org.