A Charlotte "Prepper" Braces for the Worst 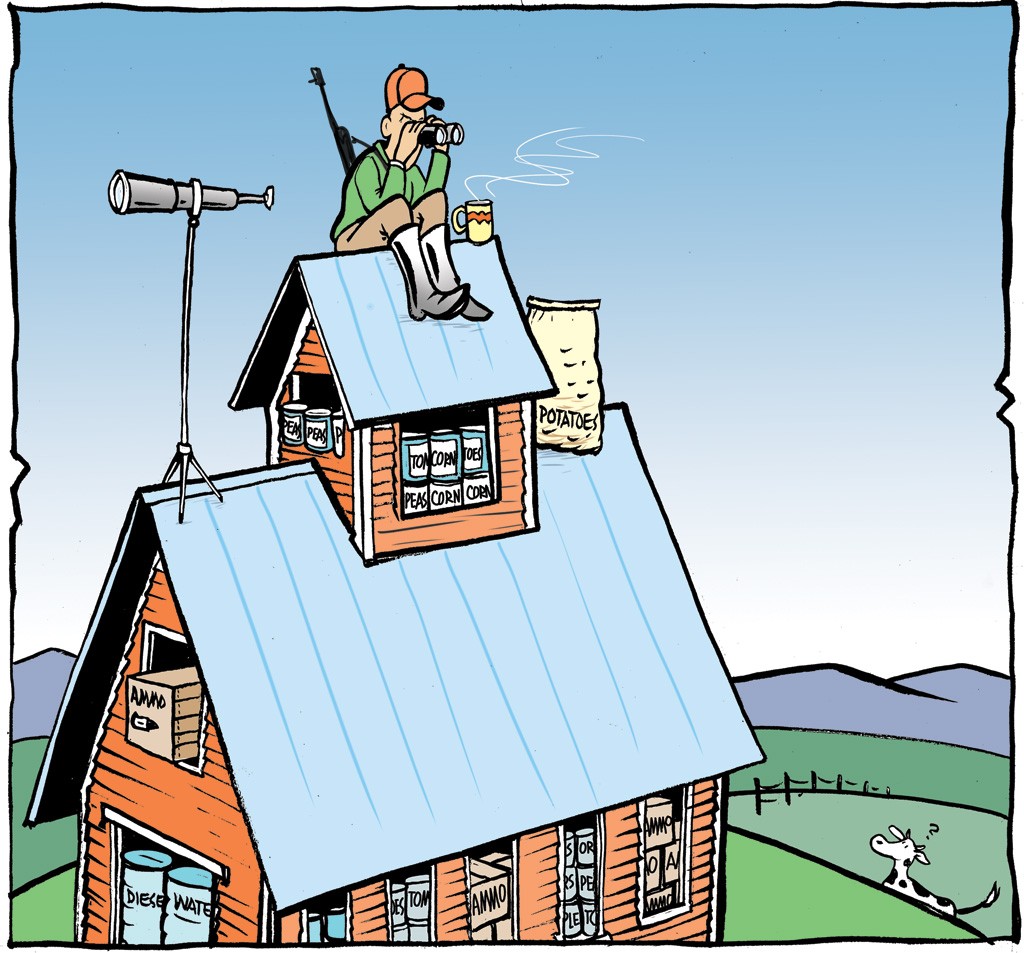 I can't tell you his name, or where he lives — to do so, the Prepper told me, would compromise "OPSEC."

If, like me, you don't know what OPSEC means, the Prepper will enlighten you: "operational security."

At first I thought he was joking. Then, after two meetings, the Prepper took me into the basement of his barn on a hill in Charlotte, which to the casual passerby might look like any other barn on any other hill in any other part of this posh Chittenden County township. He led me through the shadows to the back of the basement, which you wouldn't realize existed if you didn't look carefully, and showed me the secret door to the secret room with his secret stash of ammunition.

To be exact, the room holds 100,000 rounds of ammunition. The whole OPSEC thing started to make a little more sense.

His massive ammo supply aside, the Prepper is a fairly normal guy. The barn and the sloping, green fields of his property are beautiful, but he insists he's not rich — just someone who works hard and got a good deal on some land. And sure, he has an unusual hobby.

"You've heard of the Nearings?" he asked me, sitting in a comfortable lawn chair in the shadow of his barn, his Jack Russell terrier lounging beside us. He was talking about Scott and Helen Nearing, advocates for self-reliance who homesteaded in rural Vermont in the 1930s and '40s.

"That's exactly what it is," the Prepper said, gesturing to his compound, "but with a few bonus features."

A "prepper" is essentially a survivalist: someone preparing, as the nickname suggests, for any emergency: the apocalypse; massive natural disasters; the collapse; of society brought on by a shortage of electricity, fuel, food or water; economic collapse or a global pandemic. Gearing up for such worst-case scenarios is widespread enough in modern-day America to have inspired an ongoing National Geographic Channel series called "Doomsday Preppers," which profiles examples around the nation.

Our Prepper's preoccupation with survival began in earnest about 10 years ago. No single event or catastrophe jump-started his efforts, he said, though living without power for a week after a 1998 ice storm did get him thinking. He decided it made sense to be ready for natural or human-made catastrophes that might befall the country or the region. He's particularly worried about solar flares, which he believes could knock out the electrical grid for weeks, months or even years. (One British space weather scientist posited, in a 2012 commentary in the journal Nature, that just such a massive geomagnetic storm could wreak havoc on modern technology.)

"You start thinking about 'How do you live if you've got nothing?'" the Prepper said.

So he started ticking off his basic needs. Shelter: That's where the barn came in. A few small solar panels — hidden from view from the road — power the structure, which is entirely off the grid.

"If you don't have water, everything else fails," he told me. So he put in solar-powered pumps that feed water to the barn from a spring-fed pond on his property. The barn even has a solar-powered hot-water shower, and the Prepper has the capacity to purify a half million gallons of drinking water.

What about first aid? I asked. Not stopping at gauze and antiseptics, the Prepper added an Army field-trauma-hospital kit to his stash. Food? That one's easy, he said: He has enough dehydrated food stored to feed his wife, two adult sons and their girlfriends for three years — and he has enough seeds to plant crops that could fill three or four football fields. The food stores are divided into multiple stashes, so that even if one is compromised, others will be available.

The Prepper has practiced surreptitiously scrambling from his barn to Lake Champlain along streambeds (for fishing). He keeps four beehives (sweetener) and chickens (eggs).

Fuel? He's buried two propane tanks, and has a couple hundred gallons of gasoline on hand. He plans to install his generator indoors, where it can't be seen or heard by passersby, and pipe the exhaust underground. "Stealth mode," he said.

"The real thing would be just to not go anywhere," the Prepper said. "Bed down. Be quiet."

He gestured to his barn. "If you looked down here at night, you wouldn't even see it. And during the day, it's just a barn at the end of a field."

Stealth matters because preparing for disaster goes beyond providing for oneself and one's family. You store your stuff, and then "you have to protect your stuff from other people," the Prepper said. A world where this off-grid compound is necessary, he reasoned, will doubtless have others who are unprepared and desperate.

"It's good to have a vantage point," he explained, pointing to his cupola, where he is experimenting with bullet proofing.

The Prepper has solar-powered walkie-talkies, with which he and other members of his compound would communicate, he speculated. He knows the exact length of his driveway, and owns a sniper rifle that can shoot a target a mile away. He's collected 20 long guns and 15 handguns.

The Prepper still has more work to do on the compound, but "if something happened, I could be ready instantly," he said.

"My wife thinks it's insane," he added. If disaster struck, she'd want to take everyone in. Him? He has no problem turning away the unprepared.

"It's kind of laughable," he said cheerfully about his preparedness pastime. "But it's not going to be funny if it happens."

It's impossible to know how many other preppers exist in Vermont. A few regular writers post in the "Vermont" subsection of the American Preppers Network online forum.

"My family and I are starting to get prepared for when TSHTF [the shit hits the fan], because we are convinced it isn't a matter of if but when," writes a Vermonter from Washington County.

A Barre apartment dweller writes that he's stored six months' worth of food — and has his eye on an AR-15.

Several mention that they keep their prepping under wraps, sometimes even concealing it from close friends and family. But it's not all weapons and paranoia. One commenter writes that Tropical Storm Irene motivated his prepping. Others discuss canning and root cellars, water purification systems and backyard chickens.

Since meeting the Prepper, I've found myself talking about him almost obsessively. When a friend visited recently from New York City, I passed on the tidbit the Prepper shared about New York's food supply: The city, he claimed, has perhaps two or three days' worth of food. I told her she could come to Vermont if TSHTF.

"We've just lost that ability to make, to can, to do anything," mused the Prepper during our leisurely conversation.

I balked at that. After all, I can strawberry jam every year! I knit mittens! But back at home, I eyed my narrow pantry shelves somberly. My family of three wouldn't survive long on strawberry jam. Even my more useful domestic skills — I can sew a mean pillow cover and cook a tasty lasagna — rely heavily on Pinterest tutorials and Cook's Illustrated recipes. I wondered, even if we did have dehydrated meals on hand, just how desperate would I have to be to eat them?

Try as I might to stump the Prepper during our conversation, he seemed ready for anything — almost. "Do you have dog food?" I asked idly, eyeing his terrier. He paused. There's a business opportunity, he said finally: long-term storage for dog food. He scooped up his pup as I was leaving, snuggling him close. "We're not going to make you eat mice," he cooed.

When I bade farewell to the Prepper, he exhorted me to get a bug-out bag (a short-term-survival kit) and learn to shoot a gun. I told him I'd consider it — and then teased that, for all his stealth mode and OPSEC, now I knew where he lived. In a real emergency, I'd come bearing dog food.

Little good it would do me; I'm not the one with the guns.

The original print version of this article was headlined "Survival Mode"