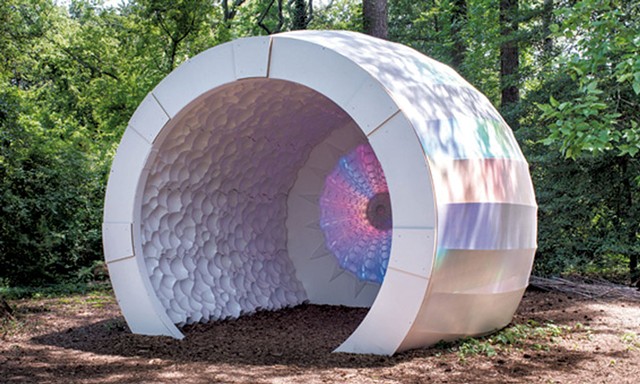 In 2012, on Russia's Kamchatka Peninsula, a group of tourists and a guide stumbled on an extraordinary feat of nature: a network of glacial caves sculpted by the movements of a warm-running underground stream. Since that discovery, the caves have provoked awe and captured imaginations around the world — not least for the way sunlight interacts with the ice, refracting a range of brilliant colors in the tunnels.

This year in Vermont, visitors to Spruce Peak at Stowe Mountain are invited to experience a work of art directly inspired by the Kamchatka wonder: "Dreamcatcher" by Los Angeles artist James Peterson.

The interactive installation can be found just outside the Spa & Wellness Center at Stowe Mountain Lodge at the base of Mount Mansfield — it's hard to miss. Made from polystyrene and acrylic materials over a steel shell, the work looks like a small futuristic bandstand, or an open-faced igloo. Colored LED lights emanate from behind a multi-petaled, mandala-like flower affixed to the structure's back wall; guests can press buttons at its center to change the lights' colors.

The interior of "Dreamcatcher" undeniably mimics the texture of the Kamchatka cave walls, which are not unlike the sides of a cantaloupe that's been hollowed out with a melon baller. It's a motif that Peterson has used in at least one other of the pieces he calls "art + contraptions": "Cryochrome," a 2014 walk-through installation at southern California's Coachella Valley Music and Arts Festival.

Trippy installation art and skiing are not a particularly common mix. "Dreamcatcher" has arrived in Stowe thanks to a unique partnership of the Spruce Peak Resort Association and Helen Day Art Center. The initiative, formally called the Artist-in-Residence Project at Spruce Peak, is now in its third year.

According to the SPRA's David Hatoff, the resort association hopes to bring exposure to its ski destination through contemporary art offerings and to work closely with the Spruce Peak Performing Arts Center.

"I felt like James' work was perfect for [Spruce Peak]," Moore said in a recent slopeside interview. "It relates so well to this place."

A Michigan native, Peterson has been employed in set design and boasts 10 years working in the fabrication facility at the Southern California Institute of Architecture. His installation works merge environmental and biological forms, such as diatoms and barnacles, with sleek geometry and the universal appeal of colorful lights.

Interactivity is often a key component. Peterson writes on his website: "[My] passion is fueled by creating works that merge sculpture, engineering, mechanics, geometry, modularity and a love of materials in order to spark interactivity and responsiveness between the object and the viewer."

Moore considers "Dreamcatcher" to be a sort of figurative fireplace, not unlike the actual fires burning in the nearby lodges and ski chalets.

"Akin to stoking a fire," reads exhibition text, "this communal space features an interactive hearth through which visitors, by gently pressing its buttons, can explore luminous color variations."

Describing the work as "an echo of ancient times when tribes would gather around warmth during the winter months," Peterson designed "Dreamcatcher" to tap into past and primal human needs. It does so, however, in a decidedly space-age fashion. Moore likens the structure to something from Star Wars.

Some visitors encountering the sculpture may even experience an unexpected moment of contemplation. "As you gather here," suggests its descriptive placard, "think about these questions: How far have you come? Where will you go? What are your dreams?"

The original print version of this article was headlined "At Stowe's Spruce Peak, an Outdoor Art Installation Dazzles"