On March 7, 2020, Jim Hasson's 94th birthday, Vermont was preparing for an unprecedented shutdown.

On Sunday, the Cavendish man's 95th birthday, things were looking up. He'd recently gotten his second shot of COVID-19 vaccine, and, under a chilly bright blue sky, he settled into a chair along Main Street. A surprise procession of more than 50 fire trucks, police cars and passenger vehicles cruised by, and those inside waved, honked and yelled birthday greetings. Some, wearing masks, stopped to greet Hasson and deliver cake and cards.

Even behind his own mask, Hasson's grin was unmistakable.

"If I had known 95 was gonna be so much fun, I would have done it years ago," he said, adding: "I'm not used to being in the spotlight, but this was quite a day."

Seven Days first met the retired plumber and veteran of both World War II and the Vietnam War last spring at the house he shares with one of his sons at the end of a long dirt road. Without internet, TV or the meals he shared with companions at the Thompson Senior Center in Woodstock, Hasson was feeling pretty blue. 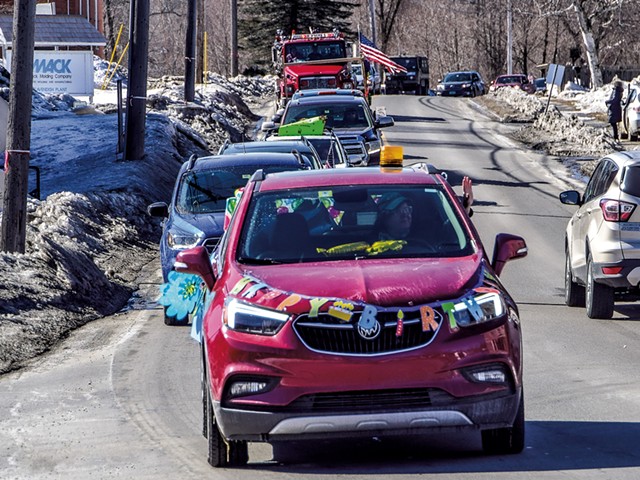 But during a phone interview on Monday, he was positively giddy. He recounted the birthday procession and the hundreds of cards he'd received. Three of his four children made it to the event, as did his 4-year-old great-granddaughter, who lives on Martha's Vineyard.

"If you want to be a hero, the secret is: You have to outlive everybody else," Hasson said with a laugh. He's looking forward to "being emancipated one of these days" from the great COVID-19 lockdown — and he's glad to have made it through.

"Life was never monotonous," Hasson said as he recounted his time in the service and as a "country plumber" in the Cavendish area. "Every day was an adventure."

The original print version of this article was headlined "Better Birthday"