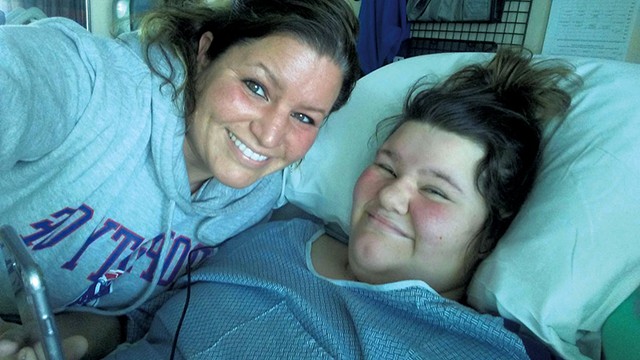 Roderick Larocque was steering his Subaru on slushy Interstate 89 in St. Albans on December 23 when he lost control of the car and flipped it. One passenger, his 13-year-old daughter, Ilyana Farr, suffered a devastating spinal injury that left her paralyzed from the waist down.

The eighth grader, who enjoyed playing basketball and the trumpet, has been hospitalized since and is struggling with once-simple tasks such as putting on her pants. Ilyana's mother, Angie Farr, has been by her side, learning how to catheterize her daughter, among other new tasks of her own.

Angie has also become an expert in what she says are woeful shortcomings in Vermont's insurance rules.

That's because Larocque carried a bare-bones auto insurance policy with $25,000-per-person injury coverage — the legal minimum in Vermont. It's a meager amount for a girl who will need a lifetime of care.

Some Vermont insurance agents and lawmakers have been concerned about such dilemmas for years. A little-known law that hasn't been tweaked since the 1990s fails to ensure that victims of serious crashes get enough cash to cover medical expenses. The law needs updating, they argue.

Angie, a single mom with two kids, makes enough as a supervisor at Peerless Clothing International, a distribution center in St. Albans, to pay rent, put food on the table and take care of necessities. Now, facing a burden that the social safety net will not fully fund, she fears financial ruin.

"There's nothing to fall back on," Angie said. "If there was a good policy, this would be less stressful. You shouldn't be able to sell cheap policies ... How many other people are out on the streets right now with the poor coverage?"

Insurance agents in Vermont say they try to steer people away from such policies.

"Most of my agents sell only $100,000 policies [at minimum]," said Vermont Insurance Agents Association executive director Mary Eversole. "The $25,000 doesn't do anything for you nowadays, and the purpose of insurance is to make the person whole."

Gail McKenna, who has worked at the Crowley Insurance Agency in Burlington for 40 years, requires customers who insist on taking out a $25,000 policy to sign a waiver, making it clear that she offered them more robust coverage. McKenna said she is concerned that she could be sued when people with bare-bones policies cause wrecks.

"We always quote the higher limit and try to strongly suggest that they purchase them," said McKenna. "You're doing them a favor, along with the person they're about to hit; $25,000 just doesn't go very far. But once in a while, you run into someone who plain doesn't get it."

Last February, Rep. Janssen Willhoit (R-St. Johnsbury) introduced a bill that would raise the injury coverage minimum to $100,000 per passenger. Willhoit told Seven Days he had never given insurance much thought until a few constituents showed up at one of his regular listening sessions and discussed being driven into near poverty by medical bills that exceeded $25,000.

One elderly woman racked up more than $200,000 in hospital expenses after she was in a wreck with a driver who had the minimum coverage, Willhoit said.

"Sadly, that's not an isolated situation," he said. "We have many Vermonters who can tell similar stories of tragic events because there was no way to capture the money needed to recover."

But Willhoit isn't a Statehouse power broker, and insurance minimums aren't a burning issue. His bill didn't get a committee hearing last year, and its prospects don't look much better in the current session, he said.

Willhoit is not the first lawmaker to try to increase insurance-coverage minimums. Rep. Bill Botzow (D-Pownal) introduced a bill in 2009 that was virtually identical to Willhoit's — and it went nowhere. In 2016, John Campbell, who was then the Senate president pro tempore, also introduced a bill that would have mandated a $100,000 minimum. Even the leader of the Senate couldn't get a hearing on the proposal.

"It's not a sexy topic," Campbell said. "And you don't have a large lobbying arm at the Statehouse clamoring for larger minimums, so nothing happens. It's clearly something that should be addressed. We should be concerned that people we're allowing to drive aren't capable of compensating people if they hurt them."

Campbell spent most of his career as an attorney specializing in personal injury cases. He said insurance did not provide enough money for several of his clients who ended up on Social Security or Medicare. But when crash victims have life-altering injuries, homes have to be refitted and other family members often become caregivers. The government safety net doesn't come close to providing for those expenses, Campbell said.

And, he noted, whatever the safety net does provide is funded by taxpayers who effectively pick up the slack for insurance companies.

Despite such concerns, Vermont is in the middle of the pack when it comes to insurance minimums. It is one of 33 states with a $25,000 minimum, according to the nonprofit Insurance Information Institute. Elsewhere in New England, live-free-or-die New Hampshire doesn't require any minimum injury coverage; Maine requires $50,000.

Other state legislatures have debated raising minimums in recent years, and advocates have had limited success. While frontline agents may see the wisdom in higher minimums, the insurance-industry lobby has other ideas. The Property Casualty Insurers Association of America, the nation's largest organization of insurance companies, has lobbied in several states against raising minimums, and the industry group opposes Willhoit's proposal.

"The public-policy dilemma is that you want to provide at least some insurance coverage for the greatest amount of people, as opposed to a large amount of insurance coverage that only a few people can afford," PCI vice president of state government relations Frank O'Brien said.

A 2015 study from the Insurance Information Institute found an estimated 7 percent of Vermont motorists flout the law and drive without auto insurance — well below the 13 percent national average. Vermont ranks 47th in the country in the percentage of uninsured motorists.

"What that tells us is that, roughly speaking, public policy makers in the state of Vermont have gotten the right balance," O'Brien said. "Most people are driving around insured, so there's at least some coverage out there."

While "tragic," Ilyana's case is not the norm, O'Brien said. In most crashes, the coverage is enough, he added.

Angie's personal injury attorney, David Pollock, said his firm frequently handles cases such as Ilyana's. "We're doing the best we can for her, and we're exploring all available options," Pollock said. Victims often have little recourse, he said, especially if the driver at fault has few assets for plaintiffs to pursue in a lawsuit.

Angie said that is the case with Larocque, her former boyfriend. He is a 51-year-old construction worker who has convictions for driving under the influence, which likely makes any auto insurance he has significantly more expensive.

Vermont State Police said they found nearly three ounces of pot in Larocque's car after the December wreck and charged him with marijuana possession. The case is pending.

Larocque said he was saddened by his daughter's injuries, but he did not believe that any insurance policy would have covered all of her care.

"It's a tragic accident," he said. "I'm not rich; I can't afford millions of dollars. And any policy, because of the result of this [crash], is not going to cover 100 percent."

Like most drivers and public officials, Angie gave the issue no thought before her life was upended. While she knows that an insurance policy for $100,000, or even higher, would never cover all of her daughter's expenses, it would help. (Angie said she is also expecting a small payout from her own insurance policy, which covers injuries caused by underinsured motorists.)

But that's not Angie's primary focus. She and her daughter have spent recent weeks at the Philadelphia Shriners Hospital for Children, a nonprofit that provides expert care to low-income patients for little or no payment. The hospital will help Ilyana prepare for her new reality back in Vermont.

The teen is trying to keep her spirits up by making "slime" from glue — a popular fad for youngsters.

To accommodate her daughter's wheelchair, Angie is moving into a downstairs unit in her apartment complex. That will cost $100 more per month. Angie took four unpaid weeks off from her job to look after Ilyana, and she is scheduled to return to work soon.