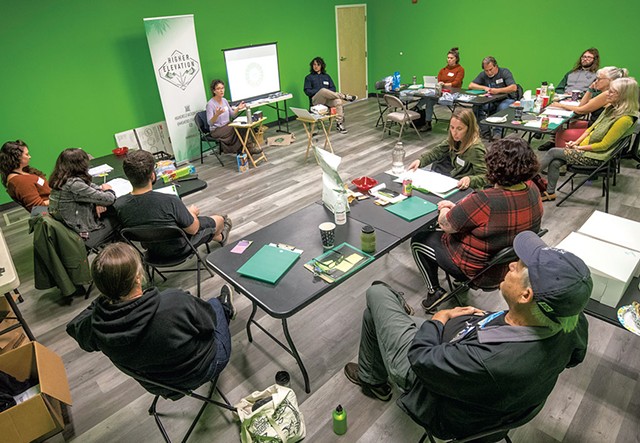 In the back room of Higher Elevation, a soon-to-open adult-use dispensary in Morrisville, registered nurse Jessilyn Dolan asked her students to sniff lavender, cloves, cinnamon and rosemary. She was teaching them to recognize the smell of caryophyllene, a terpene found in such cannabis strains as Sour Diesel, Bubba Kush and Girl Scout Cookies.

Just like wine varietals, different cannabis strains have a "nose"; it's caused by the presence of particular terpenes, hundreds of compounds that are naturally produced by the cannabis plant. To help the students identify myrcene, a terpene found in 43 percent of all cannabis strains, including AK-47 and OG Kush, Dolan had them sniff mangoes, hops and lemongrass.

Some of the students were dispensary professionals, or "budtenders," and Dolan's olfactory lesson was about more than honing their palates. Caryophyllene, for instance, has calming, anti-inflammatory and anti-anxiety properties. If a customer comes into a dispensary seeking those therapeutic effects or enjoys a strain high in that particular terpene, an educated budtender will have a better idea of what to recommend.

When Vermont's adult-use cannabis retail market opens on October 1, consumers will find an array of options unlike anything they've seen before in the state. Beyond selling cannabis flower, many dispensaries will also offer concentrates, distillates, tinctures, salves, vaping products, and edibles in the form of candies, baked goods and tetrahydrocannabinol (THC)-infused beverages. Within each method of consumption, customers will choose among different cultivars or strains, with packages that list their contents by percentages of their terpenes and cannabinoids.

For many customers, especially those who've never used cannabis before, haven't done so in years or are accustomed to buying whatever pot their dealer has available, the information overload could blow their minds before they ever light up.

That's where budtenders come in. The state's Cannabis Control Board has mandated training for all dispensary workers before they can serve the public, though it hasn't yet spelled out how long the classes must be or which topics must be covered.

So Dolan, a Richmond resident who is the director of the American Cannabis Nurses Association, stepped in to fill the gaps. The class in Morrisville was the first of many she'll offer to budtenders and consumers in Vermont. Through such classes, upcoming monthly webinars and a free cannabis hotline she created, she hopes to ensure that Vermont's cannabis professionals are the most knowledgeable in the country. 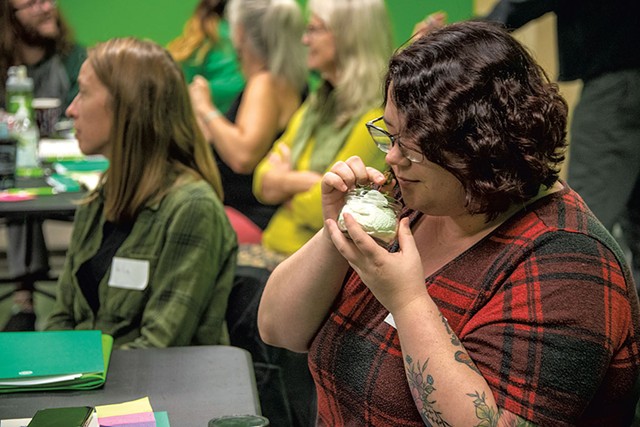 For eight hours on a recent weekday, Dolan, who is also a cannabis farmer and certified "ganjier," or cannabis sommelier, took her students on a deep dive into the botany, chemistry and agriculture of cannabis.

In their personal experience with cannabis, Dolan's students ranged from infrequent partakers to a man who had smoked pot virtually every day for the past 53 years. They learned about the human endocannabinoid system and the advantages of consuming whole-plant medicine rather than extracts. They examined cannabis buds under jeweler's glasses, then ground and tasted them with "dry hits" of unlit joints. And they discussed the terroir of weed and how plants grown outdoors differ from those cultivated indoors.

"Blueberry Muffin is the one I can't live without," Dolan said about the strain she routinely uses for her migraines. "But the indoor [variety] doesn't work for me."

Dolan hopes to dispel much of the confusion, intimidation and fear that some consumers will experience as they interact with a modern, sophisticated cannabis industry. For the more experienced users, including those who consume regularly, she wants to debunk common and deeply ingrained myths, such as the belief that strains with higher concentrations of THC automatically provide a better high and more "bang for the buck."

"This is plant medicine. Learn to trust yourself." Jessilyn Dolan tweet this

Regardless of a user's weed wisdom, Dolan said, she wants to improve the way Vermonters consume cannabis by enabling them to have more pleasurable, rewarding and cost-effective highs.

"All too often, we have people who try cannabis and it doesn't work for them, and they write it off," she said. "It gets them too high, or it gives them the opposite feeling than what they want."

One of the most common misconceptions about cannabis, Dolan explained, is that THC is its only psychoactive component, and its other compounds are secondary or insignificant.

In fact, THC is only one of hundreds of cannabinoids that create the synergistic "entourage effect" that users desire. The plant's other compounds, including terpenes, phenols, flavonoids and esters, all work together to produce its therapeutic and euphoric benefits. That's why Dolan prefers the term "ensemble effect," which indicates that THC isn't a solo performer but one of many, like the musicians in an orchestra.

For this reason, Dolan recommends that people consume cannabis in its natural, whole-plant state rather than as distillates or isolates, such as vape pen oils, which are manufactured through processes that remove the terpenes and flavonoids to leave just the cannabinoids. Such products raise the user's THC tolerance, Dolan explained, offering a high that can feel less satisfying. And for those who seek the plant's medicinal or therapeutic properties, such as relief from pain, stress, anxiety or insomnia, those benefits tend to fade faster in processed cannabis.

How strong is strong enough? THC percentages serve as a rough guideline for the potency of a particular strain or product, Dolan said. But she pointed out that at international cannabis competitions, such as the prestigious Emerald Cup, the award-winning strains are typically those with higher concentrations of terpenoid rather than THC.

"A 15 percent THC [strain] with 3 percent terpenes can get you higher than 30 percent THC with less than 1 percent terpenes," she said. "That doesn't make sense to many people because we've beaten it into their heads that THC is the thing that gets you high."

Another common misunderstanding in the weed world, Dolan continued, is the belief that regularly consuming cannabidiol, or CBD, will automatically ruin a user's high. But for people who use cannabis regularly, Dolan said, CBD can actually make THC work longer and more consistently, while helping their bodies produce their own endocannabinoids.

As Vermont's weed market matures, Dolan would like the industry to abandon what she sees as "lazy marketing": the classification of sativas as invigorating, indicas as sedating and hybrids as falling somewhere in the middle. While many producers and dispensaries still use these botanical categories as guidelines for the user experience, Dolan said the distinctions aren't supported by current science.

Instead, she'd like to see Vermont's cannabis consumers learn which strains and terpenes suit them best. Rather than simply asking for a sativa or an indica, she said, a customer might say, "I had something with terpinolene and limonene before, and that worked really well for me."

The goal, she emphasized, isn't to turn everyone into a weed nerd but to empower consumers to experiment, document and listen to their own bodies. Unlike alcohol or pharmaceuticals, which tend to have consistent physiological effects from one person to the next, cannabis strains affect different people differently; a strain that sedates one user might energize another. 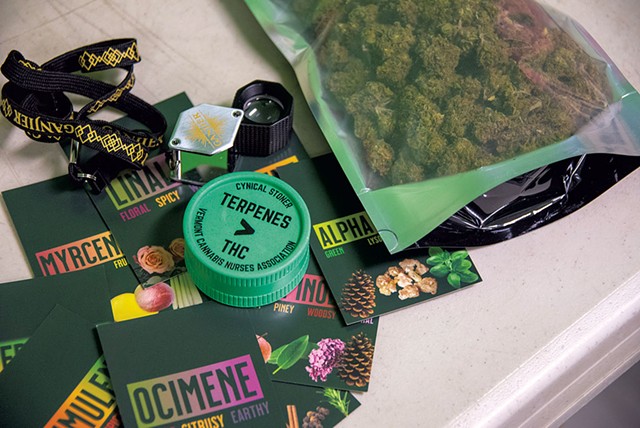 So Dolan advises consumers not to get too hung up on percentages and chemistry but to listen to their own bodies from the moment they smell a bud in a jar. If you find its aroma pleasurable, she said, that might be a strain that agrees with you. If not, try another.

"I tell people, 'Take the science and complexity out of it,'" she said. "'This is plant medicine. Learn to trust yourself.'"

Part of Dolan's efforts to create a better educated cannabis community in Vermont is her hotline, staffed by cannabis nurses and funded by participating dispensaries. Starting on October 1, people can visit the Vermont Cannabis Nurse & Ganjier website to schedule a free 15-minute consultation about particular strains, drug interactions, medical conditions and the like. This service could become critical, Dolan noted, if Vermont's medical dispensaries change or even close once the adult-use market opens.

She also plans to offer dispensary staff monthly webinars to help them answer their customers' most common questions.

The feedback on Dolan's class was overwhelmingly positive, even from students who felt a bit dazed and confused by its science-heavy content.

"It's really informative but way over my head," admitted Jude Prashaw, a 67-year-old Hyde Park resident who said she attended the class because of her personal interest in cannabis. "As a senior, I think there's a whole population that can really benefit from cannabis and needs a lot of education."

Another student, Sammie Swan, moved to Lowell from Chicago last November. She enrolled in Dolan's class because she'd eventually like to work in Vermont's cannabis industry, she said. A former patient in Illinois' medical marijuana program, Swan used weed while being treated for a tumor in her pituitary gland. Later, she used cannabis to wean her 90-year-old grandfather off powerful opioids — with success.

"I love it!" Swan said of Dolan's class. "I've been in the medical marijuana community for a while, but this is above and beyond. I can't believe how much stuff I'm learning."

The Cannabis Control Board hasn't yet notified Dolan of whether her training meets the state's educational requirements for adult-use dispensary workers. But it's hard to imagine the state requiring a course that's more comprehensive.

Not that Dolan's work is anywhere near done. Whatever she's teaching students now, she said, is bound to change in the coming years.

"Nature put together this beautiful plant that has so many components," she said, "and we're just starting to understand it and tease it apart."

To schedule a free 15-minute consultation with a cannabis nurse, visit vermontcannabisnurse.com.