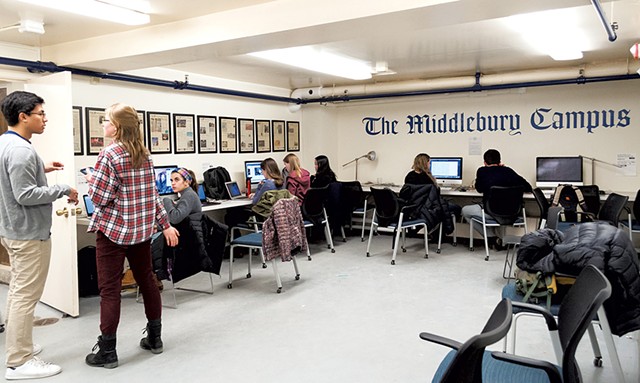 Hundreds of Middlebury College students rose to their feet and began to boo and jeer inside the McCullough Student Center. Will DiGravio stood up, too, and filmed them with his iPhone.

The 19-year-old sophomore, the de facto social media editor for the school's Middlebury Campus newspaper, had been tasked with live-streaming a lecture by author Charles Murray. The scholar was there to speak about his 2012 book Coming Apart: The State of White America, 1960-2010, though he's better known for a controversial tome he wrote 18 years prior called The Bell Curve: Intelligence and Class Structure in American Life.

Students had planned for days to protest Murray's March 2 appearance, and the Campus sent four editors and two photographers to cover the event. Another three editors went to watch as students.

DiGravio used the Periscope app to stream the scene online so anyone could see how students at the liberal arts school would greet the right-leaning Murray, whose research has been critiqued for its attempts to link social inequality to genetics.

The answer was soon evident: not well. Students turned their backs, chanted loudly, waved signs and yelled as Murray waited patiently at the lectern. About 20 minutes after he first appeared, Murray and college staff relented. He and Allison Stanger, an international politics and economics professor who'd signed on to moderate the lecture, moved to a room where they could talk alone and live-stream the discussion.

DiGravio's 43-minute video of the ruckus, which he later uploaded to YouTube, has since been viewed more than 123,000 times. It broke new ground for the Campus, which hadn't made much use of video before this episode went viral.

"As a consumer of news, I love seeing that you had these campus reporters having the foresight to Periscope the event, and then be able to still do the shoe-leather reporting and produce a great print newspaper," Campus faculty adviser Matt Jennings told Seven Days.

Murray's appearance was, for the Campus, a major journalistic test, the equivalent of a midterm. Its performance, covering a story that went national, shows how college newspapers are changing — and not changing — in the digital age.

Middlebury doesn't have a formal journalism program, but the 112-year-old, 1,500-circulation Campus still comes out every Thursday. Roughly 35 student editors are involved in assembling each issue. Stories come from a stable of writers — it's open to anyone enrolled — who pitch ideas.

The students learn by doing. "We are pretty much on our own," said Campus editor in chief Ellie Reinhardt, a senior. She was a first-year student when she started writing for the paper. Although Reinhardt has no interest in a journalism career — she has considered other media fields — former Campus staffers have gone on to work at outlets such as the New York Times, the Washington Post and the Los Angeles Times.

Unlike those media outlets, the Campus relies heavily on submitted opinion pieces. It appears more committed to sharing information and ideas than hard-hitting reportage.

"It's the old country store," said Jennings. "That a print newspaper in the 21st century is serving that role, I think, is terrific."

But there was a big miss, too, in the Campus coverage of the Murray incident: The night of the address, after he and Stanger repaired to a quiet, private room to talk, Alex Newhouse, a features editor, and other student reporters hung around, getting more color from the scene and speaking with students. Protesters were milling about, still trying to disrupt the interview. At least one person pulled a fire alarm, and people banged on the windows.

Just before 7 p.m., Newhouse and managing editor Christian Jambora — the last journalists on the scene — decided to leave together and get a quick bite to eat.

Ten minutes later, they returned to find police cars outside the hall. They had missed the crucial moment when Murray and Stanger left the building. A group of protesters, some of whom were masked, confronted them, pushing and shoving the two.

"Definitely something I'm going to regret for a while," a frustrated Newhouse said of missing the action. "This was really the first time I'd attempted to cover something like this. It's a learning experience. You do take away from that. You really gotta be committed to staying there the whole time and seeing it through."

By the next morning, other outlets, including the Addison County Independent and Seven Days, had reported on the confrontation, relying on an account from Bill Burger, the college's vice president for communications. Burger described the crowd as a violent mob that injured Stanger and then surrounded a car as Burger, Stanger and Murray tried to leave campus.

Stanger, who published her own version of events in the days after the incident, injured her neck and suffered a concussion.

National stories appeared in the Washington Post and the New York Times, and on conservative websites that gloated over the irony of left-leaning, supposedly open-minded college kids disrupting a speech. Think pieces and op-eds in the Atlantic and the Daily Beast, among others, scolded the students for failing to engage in open dialogue. Middlebury College administrators promised an investigation and disciplinary action.

The day after the speech, DiGravio updated the Campus' online story about the disrupted lecture with comments Burger made to the Independent about the violent confrontation and Stanger's injury. The update promised more in the next print edition.

But the student editors did not rush to do any original reporting for the Campus website. They opted to be thorough in their news gathering to ensure they had sufficiently examined all elements of the story before publishing anything more.

Newhouse and Reinhardt defended the decision.

The next Thursday, March 9, Newhouse and Reinhardt's 2,400-word opus — it had been whittled down from 6,000 words — ran on page 1, above the fold. "Charles Murray Visit Provokes Uproar," the headline blared. Subhead: "Organized protest derails speech, campus faces deep divisions."

"As the student newspaper, it would have been pretty easy to just cover the student side of the story," said Reinhardt. "And we tried really hard to make sure we were unbiased and had both narratives in this."

The story jumped inside, as did two other front-page stories about the incident. In the same issue, the Campus dedicated an unprecedented six pages to opinion pieces and letters to the editor examining and reflecting on what had happened.

In a break from tradition, the students did not publish an editorial because the editors could not reach consensus, according to Reinhardt. Rather than in-depth analysis, the opinion section, with its 15 pieces, allowed students and members of the academic community to chime in with their thoughts and critiques of the incident.

"We leverage the relationships we have with students," said Newhouse. "No other news site has that. We are pretty unique in the fact that, if something happens at Middlebury, we can talk to the people involved. We know their names; we can go reach out to them."

Letters on the topic continue to trickle in, though at a slower pace. One on March 16 expressed "disappointment in those disgraceful actions" at the Murray lecture. Some 270 Middlebury students, faculty, parents and alumni — including former White House press secretary Ari Fleischer and former Vermont governor Jim Douglas, now an executive-in-residence at Middlebury — signed the letter.

"They've continued to print editorials in a thoughtful way — that is, not rehashing things that have already been said," Jennings, the adviser, told Seven Days. "It's tracked the conversations I hear on campus, which reflect the complexity of the situation."

In last week's editorial, the newspaper blasted the administration for its lack of transparency in its investigation. A bill, detailed in the Campus' March 9 issue, has been proposed in the Student Government Association to revamp campus policy for inviting speakers.

Dwight Garner, a former Campus editor and a 1988 Middlebury grad who is now a literary critic for the New York Times, watched DiGravio's Periscope live-stream of the Murray incident "through my fingers, cringing." The paper should pursue every angle on the story, he said, and its reporting should outpace whatever the college president is telling the community.

"Right now is a chance for the Campus to really distinguish itself, and Middlebury, by covering the shit out of this and not covering up or doing public relations or advertising," Garner said.

Even if the rest of the world seems to have moved on, the paper intends to do just that, according to Reinhardt. At least one story about Murray's visit has appeared in every issue since the fiasco, and likely will for the foreseeable future. Reinhardt's looking forward to a little comic relief in the upcoming April Fools' Day edition. Too soon?

"I think people are processing what happened. How do we respond to it?" said Reinhardt. "What actions do we take now?"

Those questions dominated the weekly editorial meeting on a recent Monday night, suggesting that the Campus editors can agree on one thing.

"Student journalism still matters," said DiGravio. "You still need students on the ground really understanding an issue, dealing with the story for multiple weeks, exploring the nuances of it, because that's something that the national media doesn't capture — the nuanced views of the student body."