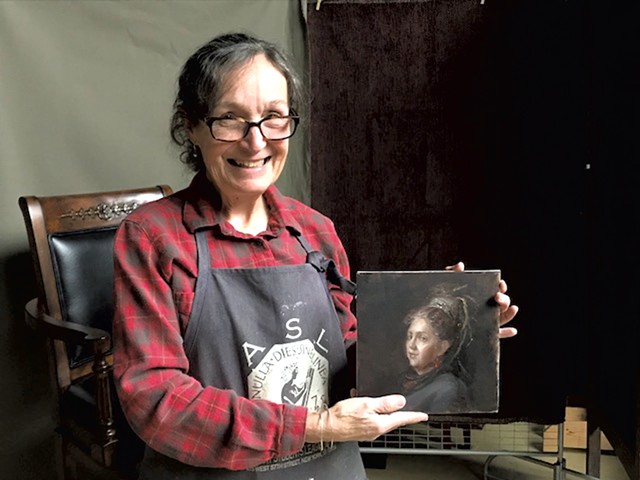 In an era defined by screen time, for-profit art making and seemingly unending world turmoil, painter Karen Winslow decided she "just needed to do something good." This fall, the 67-year-old Cambridge, Vt., painter is creating 100 portraits of Vermonters to raise money for Lamoille County charities.

For her project, which she calls "Face to Face, Community to Community," the artist is inviting her neighbors to volunteer as models at the Winslow Art Studio, a cozy, one-room wooden structure located on the property where she and husband, Jack — also an artist — live and work. The couple moved to Cambridge in 1979 from New York City, where they had studied at the Art Students League with renowned painter Frank Mason. They exhibit their work at the Bryan Memorial and Visions of Vermont galleries in nearby Jeffersonville, as well as at the Stowe Craft Design Center.

In just two hours, Winslow — a plein air painter accustomed to swiftly capturing rapidly changing landscape scenes — paints an eight-by-eight-inch square portrait of each subject from life. Her models so far include a librarian, a schoolteacher and a gallery owner; they range in age from infancy to 90. When she has finished 100 portraits, Winslow will hold an opening at her studio, selling each piece for $200. Half of the profits will be donated to a local charity or individual in need.

Why 100 portraits, instead of 10 or 20 or even 50? "I'm a very fast painter," Winslow explained with a smile. "One hundred portraits is a huge commitment, but, when you reach 67, you realize you may not be Rembrandt, but you can do something good with your art."

The more portraits Winslow produces, of course, the more funds she has the potential to raise: If all are sold, she will have $10,000 to donate.

The artist announced "Face to Face" on September 30, during the first annual Cambridge Art Trail, an open-studio event sponsored by the Cambridge Arts Council. A few days later, she posted a short project description to the local Front Porch Forum. Since then, Winslow's calendar has been packed: In late October and early November, she painted nearly 20 people.

Portrait painting is a welcome change for the artist. Owing to market demand, Winslow has primarily focused on still life and landscape paintings since moving to Vermont. In her twenties, though, she studied figure painting and drawing at New York's Fashion Institute of Technology and the Art Students League, and she found freelance work as a fashion and courtroom illustrator. 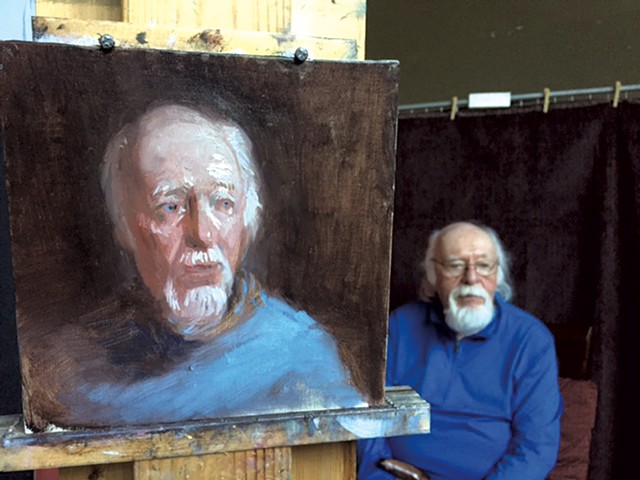 Winslow was initially inspired to take on her altruistic fundraising project earlier in the year, when a community member asked for assistance in raising money for a heart transplant.

"I said, 'Of course, I'll donate a painting to sell,'" Winslow recalled. "But if there had been more time, I knew I could have put together something more lucrative."

That got her thinking: What other charitable efforts were in need? She was inclined to fundraise for an organization with a wide reach, such as Doctors Without Borders. As she shared the seeds of her idea with friends and neighbors, though, she became convinced that there was plenty to do closer to home.

Before this year, for example, Winslow had been unaware of local organizations such as the Clarina Howard Nichols Center, a Lamoille County agency that helps victims of domestic abuse and sexual assault. Now, she intends to donate a portion of her proceeds to that nonprofit. Winslow is actively soliciting more suggestions for beneficiaries — a fitting approach, she said, for an art project that is practically crowdsourced.

"The portraits are a community effort," Winslow said. "And we'll use the funds here in the community."

Meeting new people and bringing locals together through art are bonuses of her project. Winslow gently insists on painting from life rather than from photographs. She said she likes having face-to-face interactions and hearing about her subjects' motivations to donate their time.

"It's a way of meeting people, bringing them into the studio to see what artists do, which can be kind of a mystery to people, I think," Winslow said. "It is a way of building community connections, so we can all have each other's backs."

The original print version of this article was headlined "Face to Face: Karen Winslow Paints Portraits to Benefit Local Charities"