A Burst of Construction Is Forever Changing Winooski's Thoroughfares 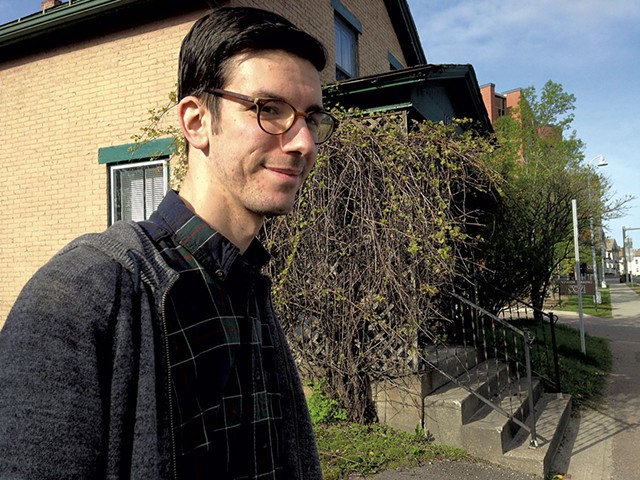 The small white 1920s bungalow at 243 East Allen Street in Winooski will soon be torn down to make way for a 24-unit apartment building. A dumpster out front is ready for the debris. It's part of a homes-to-new-apartments growth trend that critics say threatens historic properties in the revitalized mill city.

Across the street from the bungalow, a duplex was cleared for the nearly completed 39-unit Casavant Overlook. A few blocks over, also on East Allen, developers have approval to raze four homes for a 67-unit building. On nearby Main Street, at least six homes are in the path of the wrecking ball, including the second-oldest residence in Winooski, the hilltop "Mansion House." A 75-unit apartment building is planned in its place.

Of more than 10 homes facing demolition in the Onion City, three, including the Mansion House, are listed on the Vermont State Register of Historic Places. Another that was listed, at 106 East Allen Street, was moved to Burlington three years ago to make way for the five-story City Lights apartment building.

The cranes and beeping construction vehicles did not show up uninvited. In 2016, Winooski adopted a streamlined development review process for the "gateway" districts along its thoroughfares of Main Street, East Allen Street and Malletts Bay Avenue.

Known in planning wonk as form-based code, it's designed to help projects "get to a yes," according to the city master plan, in a state notorious for NIMBYism and red tape. There's consensus that the code is spurring growth as intended. But resentment is building, too.

"Unless you're a developer, I don't think anybody likes it," said lifelong Winooski resident Joe Gamache, a lawyer who lives on Mansion Street and opposes the demolition of the house for which it is named. Gamache also owns and works in the oldest home in the city, the circa 1790 Stone House on East Allen Street. Gamache wrote the city council on March 31 to ask that it impose a moratorium on growth in the gateway districts; the council has taken no steps to do so.

Gamache remembers depictions in Winooski's 2014 Public Design Workshop Report for the Form Based Code Project. It shows handsome row houses and architecturally detailed apartment buildings with porches, stoops and trees softening the scene with clouds of green. Instead, bland boxes are sprouting along the city's gateways, he said: "It doesn't seem to bear any semblance to what was portrayed about what was going to happen."

Voters have shown an eagerness to improve the city's gateways. Last year, they approved a $23 million bond to reconstruct Main Street, which, fans of form-based code point out, will create the wider sidewalks and bike lanes featured in the 2014 renderings.

The debate is the first big contretemps of Mayor Kristine Lott's tenure, which started in March. She's heard an earful. Changes should be considered, she said, to better protect historic properties and prevent dense development from spilling onto side streets. But Lott defends form-based code zoning on the whole.

"It is good to add housing stock," Lott told Seven Days. "We have a housing shortage in this area, and adding more housing can keep the supply in line with demand to prevent skyrocketing pricing for housing."

She added, "The point of form-based code was to attract development and developers."

In the wake of criticism, the planning commission has discussed possible changes to the code but hasn't made any. The city council will discuss the matter with the commission at an annual retreat this Saturday, June 1.

Some Winooski-ites want the code repealed. The threat to the Mansion House, teardowns around the city, and zoning signs sprouting in windows and yards are reviving conflicted feelings about Winooski's urban renewal demolitions. The 1970s clearance of 10 blocks eventually led to a $200 million-plus transformation of the riverfront community. The bulldozers tore out the heart of the city, some residents contend, while others believe they paved the way for new buildings that have added vitality.

Critics of form-based code say it shuts out the public. One person — the city zoning administrator — can approve four- and five-story buildings. Under a more typical development review process, an appointed board evaluates plans at publicly warned meetings.

The possible demolition of the Mansion House foreshadows a much bigger issue, said Joe Perron, president of the Winooski Historical Society.

"If that building didn't stand a chance, then really, nothing does," he said.

Perron, 28, didn't witness the 1970s demolitions but points out that initial plans would have knocked down even more structures, including the downtown buildings that are now home to Sneakers Bistro and Mule Bar, and the distinctive Winooski Block building at the top of the traffic circulator.

Nowadays "that's where we see the most activity and life," Perron said. "Because it looks like a streetscape that evolved over a century."

He'd like Winooski to consider adopting measures similar to Burlington's. Teardowns happen in the Queen City, too, and not without controversy. But Burlington code generally allows demolition of historic structures only after an extensive review, and in some cases requires developers to create replacement housing. A design review board — which Winooski lacks — encourages incorporating historic buildings into new development.

Supporters of Winooski's new zoning include Jeff Mongeon, the developer who wants to demolish the Mansion House and two other properties for the 75-unit apartment complex. He sees progress in the new construction.

"Run-down buildings" are being removed, and better ones are going up, Mongeon said: "The form-based code seems to be accomplishing its goal of revitalizing Winooski."

He added, "It gives you some comfort in knowing that as long as you follow the rules, the project should be approved."

Other developers, including Jacqueline and Nathan Dagesse, agree. The husband-and-wife team is behind multiple projects on East Allen Street, including the one where the bungalow will be torn down, the Casavant building across the street and the City Lights apartment building.

As a condition of winning state Act 250 approval for the City Lights building, the Vermont Division for Historic Preservation required that the couple offer to give away the house at 106 East Allen, which was on the state register. A Burlington developer moved the house to Manhattan Drive — to Perron's dismay.

"Buildings are not luggage," he said, adding that the community that exports them loses its architectural heritage.

The Dagesses are contemplating another development, at the intersection of East Allen and Manseau streets. The rub: There's a state-listed historic brick house on the property. They would like to incorporate it into a project, but it's unclear if that's feasible, they said.

About half of the roughly 60 Winooski buildings on the state register are in the gateway district, suggesting they are similarly at risk, Perron said. He helped lead a campaign to save the Mansion House after residents and neighbors became aware of Mongeon's proposal in April.

It's unclear how the permit battle will shake out. Last week, opponents were dealt a defeat when Winooski planning and zoning manager Eric Vorwald green-lighted two key requirements — a zoning permit and a lot-adjustment permit. Opponents have 15 days to appeal the approvals.

Still to be decided: Whether the Mansion House project must go through the scrutiny of state development review under Act 250, owing to its historic status.

The house had been listed on the state register for years — which does not prohibit demolition but can create conditions that make it more difficult. Last December, Mongeon got it delisted, arguing that alterations had erased its architectural significance. That helped pave the way for an April 8 ruling by District #4 Environmental Commission coordinator Stephanie Monaghan that his project did not need Act 250 approval.

Opponents found a wedge, however.

They discovered that the delisting meetings at the Vermont Advisory Council on Historic Preservation were not properly noticed. Due to the procedural error, the delisting was rescinded. When the council next met, on May 9, members voted to keep the house on the register.

As a result, Monaghan's April Act 250 exemption was effectively voided, and the developer must ask for a new one. Mongeon is now seeking an exemption that allows the demolition of listed properties, under certain conditions, without an Act 250 review.

On May 14, Mongeon and codeveloper Travis Fitzgerald signed an agreement with the Vermont Division for Historic Preservation. They consented to create photo documentation of the Mansion House and an interpretive history panel before demolition. The steps "adequately mitigate" the adverse effect of demolishing the building, according to the agreement, signed by Vermont historic preservation officer Laura Trieschmann.

After the vote to keep the house on the register, Mongeon had stormed out of the Montpelier conference room and initially refused to talk to the media. Last week, after several recent permit decisions went his way, Mongeon told Seven Days that he feels confident the demo and development will happen.

He sees the Mansion House as a "white box" with no special distinction. Many who claim the building has historic value are neighbors who just don't like the prospect of development in their backyard, he continued.

"The property does not belong to the neighbor across the street," Mongeon said. "It belongs to the owner of the building."

Still, around the city, neighbors are weighing in on the changes, sometimes with apprehension. "I don't think anyone is entirely on board" with the scale of all the new construction, said David Elston, who lives near the soon-to-be-demolished 1920s bungalow and does not want to see "a four-story monstrosity there."

Lawyer Gamache recognizes that the form-based code likely increases the development value of his own gateway property, the Stone House. Still, he has no plans to tear it down and build a "skyscraper." Nor have the developers shopping for real estate come knocking on his door.