A Burlington Teacher Unveils the Secrets of Snake-Style Tai Chi 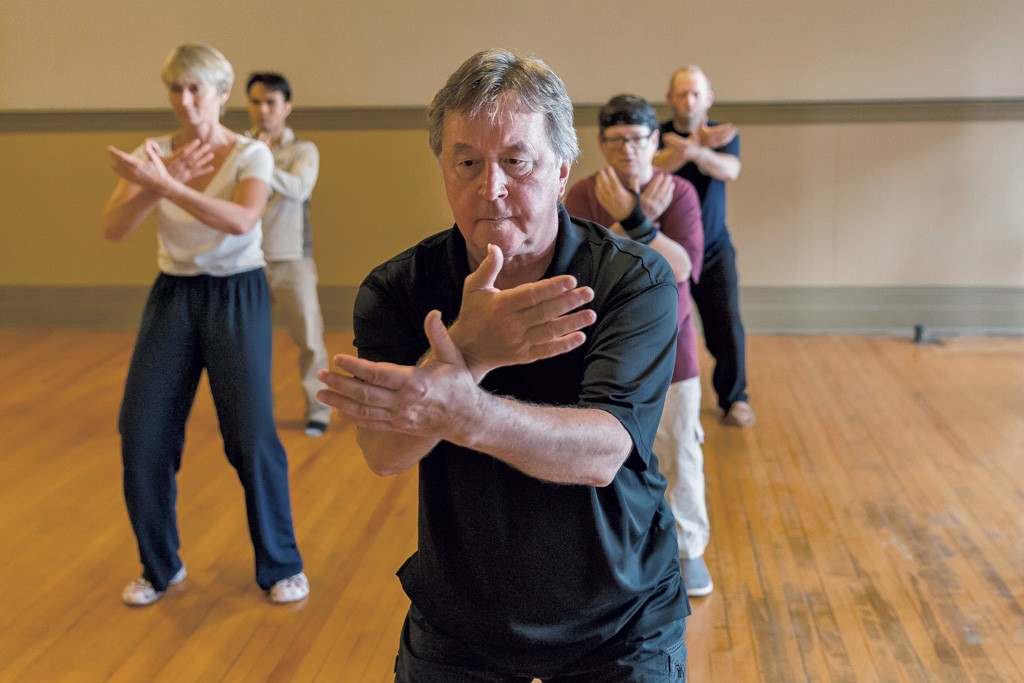 For some, yoga is sexy. Tai chi, on the other hand, not so much. "The image of tai chi is as something for people who can't do anything else," says Burlington's Bob Boyd, a longtime martial arts teacher who hopes to change that perception. "We want to recapture this the way the yoga people did."

On a sultry afternoon at Boyd's studio above Church Street, the laughter of kids and clanking of silverware outside overpower the measured swish of slippers worn by Boyd and his German student, Stephanie Panskus, on the hardwood floors. They seem unaffected by the noise as they gently move in synchronicity. To an observer, it's hard to envision tai chi as anything but the gentle art portrayed by Ang Lee in his 1992 film Pushing Hands, and practiced by so many seniors in city parks.

But when you learn where Boyd has been, and where he is going, another side of tai chi unfolds — one that could inspire a new generation of practition-ers, if not necessarily a new line of lululemon apparel.

Boyd was the "second disciple" to study tai chi under Hong Kong Grandmaster Ip Tai Tak, an experience that forms the basis of his 2012 book Snake Style Tai Chi Chuan: The Hidden System of the Yang Family. The book's recent translation into German has brought an influx of international students to the Queen City to train with Boyd. The visibility has inspired new challenges, including criticism from skeptics in the tai chi community.

Boyd's martial arts journey began in the 1970s, when, he recalls, he "lived, breathed and dreamed karate." In Snake Style, he describes how he traveled to Okinawa and was stumped by the fluid movements of the Japanese karate artists, which he eventually traced to the "soft and subtle power" of Chinese tai chi. The masters of the most powerful style, Boyd would discover, were the members of the Yang tai chi dynasty, but they kept their practice to themselves.

Fast forward to 2000. After years of studying traditional tai chi in the U.S., Boyd traveled to Hong Kong and befriended the daughter of Ip Tai Tak, who had been chosen as the "first disciple" of the Yang family to carry on the hidden tradition. Boyd negotiated to become Ip's disciple and learn this so-called "snake style."

"He basically won the tai chi lottery," says Ernie Pomerleau, a Burlington real estate broker who has been practicing martial arts alongside his friend Boyd since they were both 18.

Why would an ancient Chinese master choose a Vermonter to carry on this secret tradition? "He spent 40 years looking for this," says Pomerleau of Boyd. "There's an element of luck, but it's more that tenacity — he gets up every day and he wants to be better. He was willing to train and endure anything. Master Ip found the perfect disciple, and [Boyd] found the perfect teacher."

A casual observer, or even a serious observer, may find it tricky to distinguish between traditional (or tiger-style) tai chi and the snake-style tai chi that Boyd learned from Ip. As Boyd explains, the former is based on treating the muscles more independently and propelling from the legs. In the Ip family tradition, everything is centered on the flexibility of the spine and the core muscles.

In Boyd's studio, Panskus looks on as he explains. "Traditionally, I would pick up the leg independently, set the heel down, begin pushing up with the right leg and the right buttock until the weight transferred to the left leg. Then I would begin to rotate my hips and move my hands to finish the posture," Boyd says, demonstrating the move. "Now, I'll take the same open position, but instead of picking up my leg and placing it, I'm going to arch my spine a little bit; that will pull these core muscles in; it'll pick up this left hip; I'll move with my entire body forward, and then the hands will move."

The subtle motions add up to a much more powerful position, says Boyd. But that he's teaching them at all has alienated him from some fellow tai chi practitioners, who would prefer to keep ancient Chinese secrets secret. Boyd sees himself as the primary carrier of this particular legacy of Ip, asserting in an email, "Anyone else claiming to teach the snake style learned from me."

A quick Google search turns up plenty of pooh-poohers, including New York critic and tai chi teacher H. Won Gim, who writes: "Tai Chi Snake style? Don't make me laugh." There is no such thing, he says, scoffing at the idea that such hidden forms could be taught in Vermont, even if they did exist.

Boyd shrugs off these comments as "character assassination," attributing the tai chi rivalry to a lack of standardization in the martial art. When it comes to sharing the snake style, he stands firm.

"Bob is teaching everything openly he knows about tai chi," writes Panskus, 51, in an email. She adds that unlearning the tiger style and learning the snake style from Boyd over the past eight years has changed her life. "It strengthens all the inner organs, makes your back and muscles strong and flexible, and gives you great power for everyday challenges. You learned to stay relaxed in difficult situations."

French disciple Thierry Bae also praises Boyd for his extraordinary knowledge and instruction. Having spent 30 years trying to learn secret Chinese family styles, he says, he eventually tried the snake style and got hooked. "But only with Bob," he writes, "we really follow the internal principles, giving a special feeling of the body and energy. Bob gave me the keys to understand how to be rooted, relaxed and powerful."

Boyd taught Pomerleau the snake style: "It's so esoteric — it's so deeply, fundamentally different and so hard to learn, that the public isn't taught that much." For Pomerleau, the payoffs are profound. "My back has dramatically improved, my asthma has gone away and my head is clearer," he says. "I'm 68, but I could beat most 21-year-olds.

"I love the fact that I have this incredible gift given to me by Bob and Master Ip to defend myself, but just feel better; I'm healthier. We climbed the tai chi mountain and we got the chalice," Pomerleau says. "Whether other people believe that or not, it doesn't really matter."

The original print version of this article was headlined "Snake Ayes"