Local Partners Help Feed Kids When School Is Out 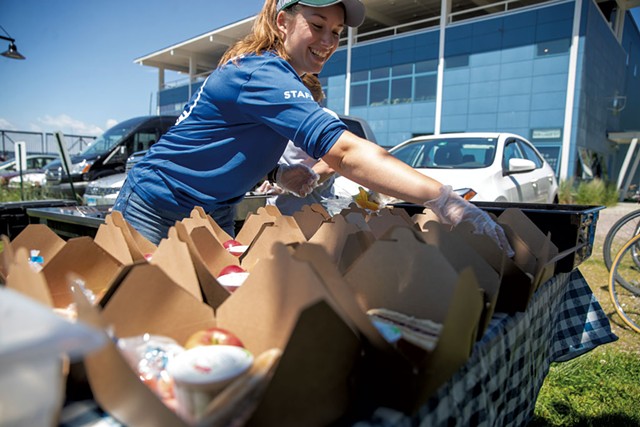 The smell of summer wafted from a barbecue grill set up on a grassy corner between the Community Sailing Center and the Andy A_Dog Williams Skatepark near the Burlington waterfront. It was 11:40 on a Wednesday morning, and Julie Davis was grilling local beef burgers, bean burgers and turkey hot dogs. Her colleague, Mitzy Foy, worked at a table covered with cardboard takeout boxes, putting a fresh Vermont apple, a frozen fruit slushie, bagged carrots and dip in each one.

A teenager loped over from the parking lot to see what was going on. "We're serving free lunch to anybody age 18 or under starting at noon," Foy told him. "Come back in a few minutes if you want."

A bright sign stuck in the lawn underscored her words: "Free lunch here!" it proclaimed above an image of a kid using a carrot as a skateboard.

The image is part of the logo of the Burlington School Food Project, the district's food service program, which employs Davis and Foy. It's partnering with the sailing center for the second year to offer federally funded free meals there, one of 20 sites where the Burlington program feeds kids during the summer.

The Burlington School Food Project is among about 60 organizations around Vermont that serve free healthy meals and snacks to children and teens in low-income areas through the national Summer Food Service Program, which began in 1968 and is funded today through the Child Nutrition Act. The U.S. Department of Agriculture sets guidelines, and the Vermont Agency of Education administers the state program.

"It's about kids and community and healthy food." Kathy Alexander tweet this

Davis and Foy normally work at the J.J. Flynn Elementary School in Burlington's New North End, where they see firsthand why school meals matter and a summer program is needed.

"During the school year, we can guarantee feeding kids," Davis said. "So many families rely on those meals to help stretch their budgets," Foy added.

About 55 percent of Burlington's students qualify for free or reduced-price meals subsidized by the USDA during the academic year, said Doug Davis, Burlington School Food Project director. When school is out, kids still need to eat. He pointed out that supplemental food assistance such as 3SquaresVT doesn't increase in the summer, leaving families to cover many more meals with the same financial resources. The summer program is "an extension of what we do to make sure kids are ready and able to learn," Davis said.

Summer meals resemble the USDA-supported school program, but there are two major differences in their delivery, explained Becca Mitchell, child nutrition initiatives manager at Hunger Free Vermont, a nonprofit working to end hunger and malnutrition for all Vermonters.

First, access becomes an issue: It is harder to get meals to kids when they aren't in school, especially in rural areas. Second, students don't have to qualify individually, as most do for the school-year program. Instead, summer meal locations qualify by being in an area that meets an overall low-income threshold; for the kids, no paperwork is required.

In Vermont, 36,000 kids received free or reduced-price meals during the 2018-19 school year, Mitchell said. According to the Food Research & Action Center's recently released 2018 report, the state ranks second highest in the nation for the proportion of those students who also receive summer meals: 31 percent. But that means more than 25,000 kids are not accessing year-round meals, and Mitchell and other advocates are doing everything they can to close the gap.

In 2018, Hunger Free Vermont tallied 427,758 summer meals served at 286 sites across the state — from youth centers to libraries — involving 59 sponsor organizations such as local municipalities, school districts and nonprofits.

Mitchell listed three main barriers between kids and those free meals: the difficulty of finding transportation to meal sites, low awareness that summer meals are available, and the stigma or shame of acknowledging need. 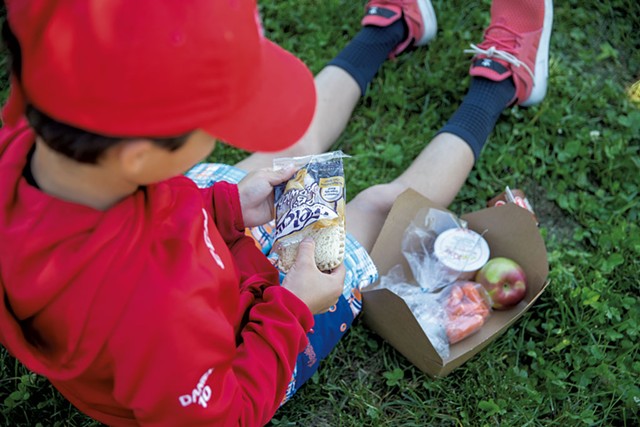 The last barrier applies year-round and is one reason the national summer meals program does not require individual kids to qualify. Many advocates see it as a step toward their ideal of a universal free school meals program, which would benefit all kids and stigmatize none.

Hunger Free Vermont works with communities and partners statewide to publicize the program and share best practices, including providing enrichment activities at meal sites such as summer reading programs, community gardening and organized games. Activities help draw kids and families, Mitchell said, and can reduce stigma by making the experience about more than free food. They can also help address "summer learning loss," an issue that disproportionately impacts low-income students.

It was noon at the sailing center, and groups of kids participating in its various sailing camps approached the table.

Summer meal programs around Vermont vary in their offerings: Some cook or grill on-site, while others deliver packed food. Some sites are accessible only to kids enrolled in a camp or program; others are open to all, such as those at parks and libraries. The site between the sailing center and the skate park is effectively a combination, providing a free lunch both to campers and to any kids who might come over from the skate park or stop along the bike path — as a few did during the hourlong lunch service.

Mary Dowd, the sailing center program director, said partnering to offer the lunch program fits the organization's mission. "We want to serve the community we're in," she said. "We're trying to make the lake more accessible to everyone." Of 300 to 400 campers each year, about 10 percent receive scholarships, Dowd said. The meal "makes it easier for families to take advantage of our program because they know their kids will also get lunch, like they would if they went to the Boys & Girls Club [of Burlington]," she explained.

Among the kids seated on the grass around the lunch table, it was impossible to tell who might have gone hungry if not for the free meal — and that was the point.

Mary Tryhorne of Montgomery sat in the shade of a tree while her two daughters ate lunch after their half-day camp. She is grateful that she can provide them with financial stability, Tryhorne said: "I grew up very low-income. My mom ran a subsidized in-home daycare in St. Johnsbury, and she would spend her own money to help the kids in daycare eat better.

"In school, I hated standing in line for lunch," Tryhorne continued. "It was pretty obvious who was getting free or reduced[-price] lunch. There was a lot of stigma with poverty. I definitely got bullied for being poor."

"We want all kids to participate, because it helps reduce the stigma around the free meals program," emphasized Heather Torrey, assistant director of the Burlington School Food Project.

"We are also providing supper and fresh-cooked options during the summer," he noted. All offerings must meet federal nutrition guidelines. One menu includes barbecued chicken sandwiches with coleslaw; another, tacos of local beef or beans alongside corn salsa. 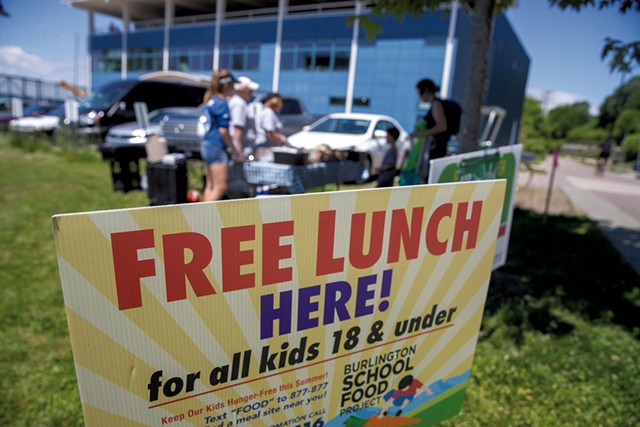 Partnerships with Burlington Parks & Recreation, the King Street Center, the Fletcher Free Library and the Boys & Girls Club of Burlington "allow us to reach many more children in a much more efficient and effective way," Davis said.

Running a meals program year-round has other benefits, he noted, allowing the organization to purchase more local food consistently and provide summer employment to about 35 percent of his staff.

"We should not have to compare ourselves to each other based on whether we can afford food. Everybody, particularly kids, should get good food," Alexander said. "We know kids are more successful when they are well fed with healthy food."

Alexander's team works with 17 sites from Starksboro to Shoreham, making geographic distance her biggest challenge. "We can do the food, but transportation is hard," she said. "Great partnerships really make it work."

Some of the bigger sites in Alexander's region are mobile home parks, which she reaches with the help of Mary Johnson Children's Center in Middlebury and Middlebury College student drivers. "I know the families there really appreciate it," Alexander said. "They are very isolated, and to get a quality meal in the middle of the day with fresh fruits and vegetables takes a burden off."

Shoreham is beyond her district, Alexander said, "but there's this amazing librarian there, and she called me eight years ago and said, 'We have to do a program.'" The librarian, Abby Adams, finds volunteers who drive to a midway point to meet up with Alexander or a staff member. They swap the previous day's empty cooler for one full of meals such as chicken fajita-and-cheddar sandwiches with rainbow pepper strips, snow peas, ranch dip and watermelon.

Alexander also gets great satisfaction from the grill site across the street from the Vergennes town pool. The grill, which was donated by a local hardware store, attracts families who gather around picnic tables while their kids eat food prepared by her team.

"It's what community should be all about. All different people coming together to share resources," she said. "What I love about the summer meals program is that need is not the defining factor. It's about kids and community and healthy food. Everyone is at the table."

To find the free summer meals site nearest you, call Vermont 2-1-1 (toll free from anywhere in Vermont) or text "FOOD" to 877-877. Kids can go to any free meal program, regardless of their town of residence