A Burlington Performer Untangles Her Dyslexia Through Dance 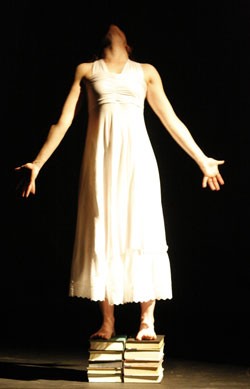 Lida Winfield didn’t learn to read until her early twenties. The Burlington dancer and teacher is so well spoken, it’s difficult to fathom that she has never read Shakespeare, that she cannot spell simple words, and that if you ask her to meet you at the corner of Maple and South Champlain, she may have to rely on a GPS to find you.

Winfield, now 33, has dyslexia. “I am not the look, the image of someone who’s illiterate,” she says. “The perception is, I’m being ridiculous, or I should just try harder.”

She’s been trying all her life. This weekend in Montpelier, Winfield will tell — and dance — her surprisingly universal story in a one-woman dance-theater work, “In Search of Air,” as part of Lost Nation Theater’s WinterFest.

Winfield performed the work earlier this month at Goddard College. Physically, she is striking: a petite woman with huge blue eyes and dark hair. But it’s her commanding voice and intimate, tightly woven story that keep the audience captivated from the moment she walks on stage, her arms piled with white tulle.

Over the next hour or so, Winfield tells the story of her early education — how she and the other kids with learning disabilities were shuffled off into a separate classroom; how she learned to memorize, but not to read; how she grew angry and disillusioned; how her mother tried to accommodate her disability by finishing her daughter’s homework; and finally, how art became her salvation. Winfield brings each story to life with movement, sometimes simply a repeated gesture, other times dancing atop a stack of books.

Talking to Winfield about the work, which she has been developing for the last seven years, offers insight not just into her process but into the way her mind works. When she references certain vignettes, she uses gestures rather than words, just as she does in the show. For example, while saying the word “classroom” to describe where she and the other kids learned to memorize, she raises her arms as if cradling a baby. For the next few references, she drops the word entirely.

Winfield tells the same stories in every performance, but she has never written them down. “I write the stories in my head,” she says. “My work doesn’t ever live on paper.”

She grew up in the Burlington area but never names her school. Winfield says she’s still angry about the way her learning disability was handled, but she’s not bitter, and neither is “In Search of Air.” Her family was loving and supportive, she says, but also at a loss.

On stage, Winfield recalls seething with anger on graduation day after her mother died, realizing she had made it through high school without learning anything. She remembers looking down at her diploma and thinking, I cannot actually read what this says.

Her turning point came when she enrolled at Landmark College, a school in Putney for students with learning disabilities; there, her whole world opened up. “My learning wasn’t restrained to a chair or a textbook,” Winfield says. “I got to lie on the floor as we discussed things.”

It wasn’t just movement that helped. “Part of it was that there wasn’t shame,” she says. “That’s where learning happens, when we’re not afraid.”

It wasn’t all smooth sailing from there. It took Winfield many tries at many different colleges to earn her BA. “Being dyslexic is still my hardest thing,” she says. “It’s still what I cry about most.”

Still, she persisted, and recently earned her MFA from Goddard. These days, education is a crucial part of Winfield’s life. In addition to teaching dance classes at the Flynn Center for the Performing Arts, Winfield is involved with the Flynn’s professional development program “Words Come Alive,” which takes her to schools around the state, working with teachers to integrate dance and movement into their academic curricula.

Winfield dreams of taking “In Search of Air” on tour, so her story can reach others who may be feeling as she once did. She wants to remind them, “We are bigger than our words,” she says. “If it hadn’t been for art and my family, I can’t imagine what would have happened.”

“In Search of Air,” created by Lida Winfield and codirected by Matt Wohl, at Lost Nation Theater in Montpelier. Thursday through Saturday, February 23 through 25, at 7:30 p.m.; Sunday, February 26, at 2 p.m. $15-20. lostnationtheater.org, lidawinfield.com

Winfield will also perform the piece at the Amy E. Tarrant Gallery, Flynn Center, on Sunday, February 26, during the reception for “Engage,” 4-6 p.m.