The clamor of children at play echoes through the halls of the former St. Joseph's School in Burlington's Old North End. In full swing is a weekly parenting group that provides opportunities for bonding — and, on a recent Tuesday night, fresh pizza.

But you won't find any mommies nursing infants or chasing toddlers here; it's Dad's Night at the Visiting Nurse Association Family Room. For four hours, fathers can enjoy a free, hot meal with their sons and daughters — and play with them on an indoor swing set, in the sand box or on wrestling mats. Occasionally, the group takes field trips to a local firehouse, the ECHO Lake Aquarium and Science Center, the movies or a Lake Monsters baseball game. Some fathers even show up without their children, just to spend time with other dads. 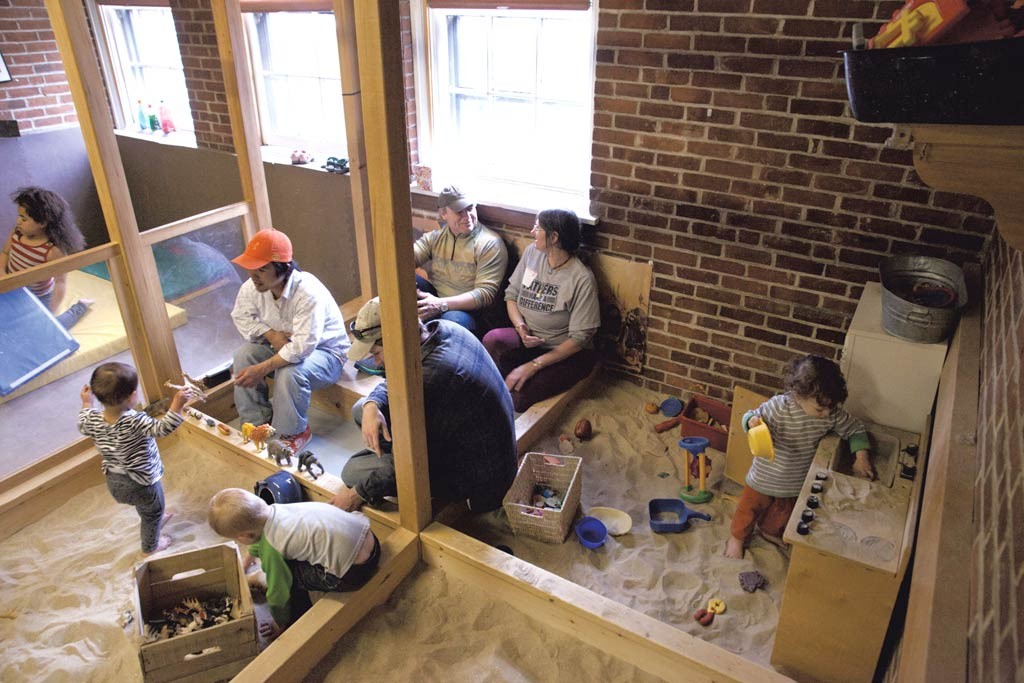 What may sound like a standard-issue fathers' group is anything but ordinary. Dad's Night is actually part of a federally funded collaboration among the VNA, the HowardCenter and Vermont Adult Learning. Called VT Dads, the program targets "at-risk" fathers, some of whom have been ordered to the group by a judge, probation officer or social worker with the Vermont Department for Children and Families. Others are legally barred from having contact with mothers of their kids, have lost custody of their children or are trying to prevent the termination of their parental rights.

Through group discussions and a federally approved adult-education course, VT Dads aims to help men — many of whom grew up without any positive male role model — become more loving, communicative and responsible parents, partners and family providers. It all happens in what the VNA describes as a "judgment-free" setting. 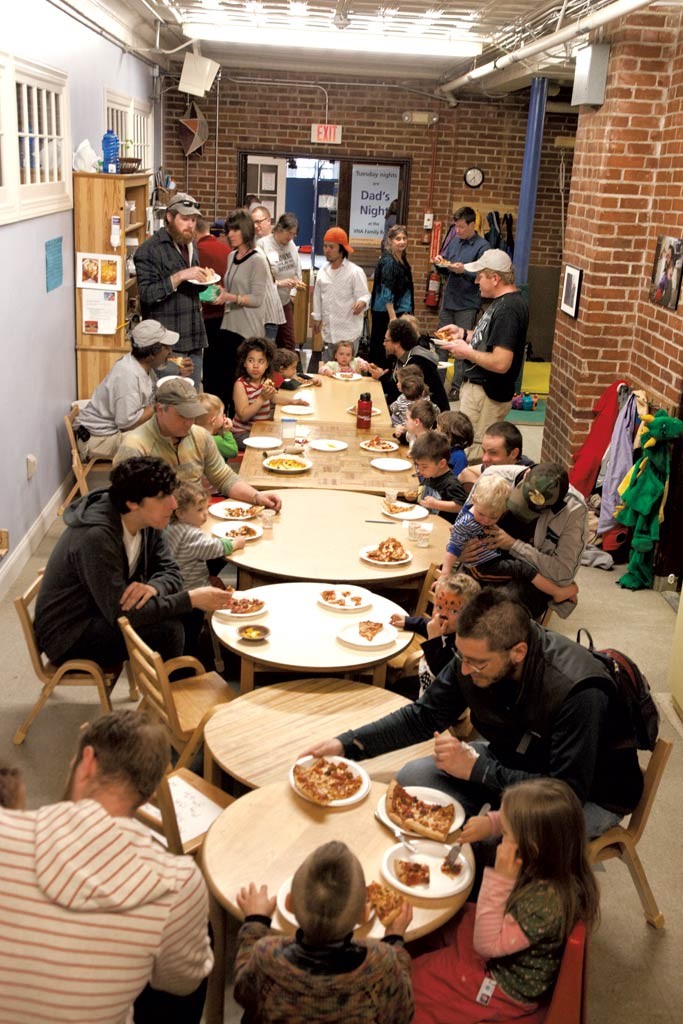 Examples of good parenting were in short supply when Matt Crain was growing up. Now 32, the Burlington resident stood outside the VNA Family Room in a gray T-shirt and baseball cap — both of which read "Fathers Make a Difference" — handing out fliers and monthly schedules about upcoming VT Dads events to some 15 fathers in attendance.

Though Crain looked like he could be the group's official spokesperson, he's not ashamed to admit that he wasn't always a good father himself. Just three months earlier, a DCF social worker walked him through the doors of the VNA Family Room and advised him to start attending the group regularly. Crain, who's currently living in Burlington's COTS family shelter, had previously signed over custody of his 7-year-old son to the boy's grandmother and was trying to avoid losing his 4-year-old boy, too.

Crain, whose weathered visage hints at a hardscrabble life, speaks in a low, gravely voice. He said he never knew his biological dad. His mom was also a "bad-choice kind of mother" who did a lot of drugs and had frequent run-ins with the law.

Since joining VT Dads, Crain said he's taken some of the classes, including one for men and their partners called Active Communication. Crain describes himself and his fiancée as "scramble-brained people who communicate in a scramble-brained way." Since completing the class, he said, it's a made "a world of difference" in their relationship. "In eight weeks' time," he said, "she and I can talk to each other about anything."

Not all of the lessons happen in the classroom. Spending time with other fathers each week has also taught Crain that he's not alone.

"It's showed me that people from all different walks of life have trouble being a father," he added. "You can be poor and broke and living in a cardboard box, or you can be rich and living in a mansion. Money doesn't make you a good dad."

Josh Edelbaum agrees. As the VNA social worker who's overseen VT Dads for four years, Edelbaum said he works with men from a variety of different financial and personal backgrounds. Yet despite their differences, Edelbaum said he sees a lot of common threads running through their pasts: physical, sexual or emotional trauma; drugs and alcohol abuse in the home; generational poverty; and single-parent households.

"Parenting under the best of circumstances is really tough," Edelbaum added. "A lot of times people talk about working with families in the community, yet what that often means is working with moms. This group is really an opportunity to bring the dads into that picture as well."

By now, Edelbaum has memorized the dismal prospects for kids who grow up in fatherless homes. According to the National Responsible Fatherhood Clearinghouse, children in father-absent households — about 24 million nationally — are five times more likely to be poor, and one-third more likely to drink, smoke, use drugs and engage in other high-risk behavior.

Yet despite such bleak statistics, Edelbaum's approach with the dads he works with, both in the classroom and through informal discussions, is to focus on the strengths these men can bring to their children's lives.

So while Edelbaum's eight-week curriculum, the 24/7 Dad, talks about helping fathers "manage their anger," Edelbaum tries to expand the discussion. "Men are more than just angry," he said. "Certainly, we all experience a whole range of emotions. That's just the one most acceptable for men to express."

That message hit home for José Santos. During a recent Dad's Night, the 34-year-old Burlington father of two — a 5-year-old daughter and a 9-year-old son — watched in quiet contemplation as his kids burned some energy on the indoor play set. Asked how he's benefited from the dads' group, Santos, who started attending Dad's Night just two months earlier, was eager to talk about how he found VT Dads: His probation officer "strongly urged" him to attend.

"I got into trouble because I happened to be drinking and I was yelling at my kids about something," Santos recalled matter-of-factly. "I was drunk and unreasonable. I flew off the handle, and my wife didn't like it and she called the cops. Long story short, I ended up resisting arrest and being Tased in front of my kids. That was a heckuva situation."

Santos said that the dads' group really opened his eyes to the emotional and genetic "baggage" he inherited from his own father, who was an alcoholic with anger-management issues.

"When you're mad, that's the only moment when you're not worried about your kids being afraid of you," he said. "The other times? That's when you really think about it. Hey, that's something you have to live with. You can't just shake that off."

What has Santos taken from his first eight weeks with the group?

"Calmness. Being humble and calm," he said. "As a person dealing with anger, this place helps me to get my mind back in check. It helps me reevaluate myself, so when I'm back around my children, I'm able to handle things a little bit more relaxed."

Edelbaum pointed out that the dads' group "really busts all the myths about men being unwilling to show affection or talk about their emotions." Put a group of fathers into a supportive and nonjudgmental environment, and they'll share their most personal stories.

But not every father who attends Dad's Night is there because a judge or probation officer ordered him to go.

Guy Estiverne, a 29-year-old native of Brooklyn, N.Y., moved to Vermont in 2008 to live with his kids and their mother. As an African American man in one of the nation's whitest states, Estiverne admitted it was initially hard for him to find a community of other men with whom he could identify. And, while Estiverne was fortunate to grow up in a two-parent household, he described his own dad as "stern ... He went to work, did his thing. He loved his kids but didn't openly show it."

The father of a 5-year-old boy and 7-year-old daughter, Estiverne has been coming to the dads' group almost every week since 2010. His daughter dangled from the monkey bars while his son, dressed in a black ninja costume, play-acted pro-wrestling moves, such as body slams and atomic knee drops, with his father.

Why does Estiverne, a gentle giant with a warm, gap-toothed smile, return week after week?

"The bonding," he explained. "It's a place where me and my son can come and be as silly as we want. And it's all encouraged. I know a lot of fathers that come here for that very reason."

Reached by phone later, Estiverne's girlfriend, Brandie Bessette, said her boyfriend was always a loving dad. But since he started attending Dad's Night, she's seen a real improvement in his parenting skills.

"He's changed a lot," she said. "Since he started going, Guy has really opened up to doing more with the kids, playing with them outside, just being a great father."

Estiverne, who's currently looking to go back to school, said that the dad's group will remain a regular part of his weekly schedule.

"I don't have it all down. I'm still learning," he said with a big grin. "But it's making me grow into the person I never thought I'd grow into."

Eight Weeks to a Better Father

VT Dads coordinator and instructor Josh Edelbaum uses a federally approved, evidence-based curriculum called the 24/7 Dad. He offered this week-by-week snapshot of some of the topics the fathers cover:

My Story. The class begins with a discussion of where the men have been, including their birthplace, age, the important people in their lives when they were young, their childhood beliefs, challenges, memories, heroes and villains. "The goal," Edelbaum explained, "is to provide some reflection back to how fathers were parented to build insight so they can be more clear and intentional with their own parenting."

Boyhood to Manhood. What were the messages that shaped the fathers' understanding of what it meant to be a man, including the key people who relayed those messages, both verbally and nonverbally? How did the women in their life influence or reinforce those ideas?

Anger. Edelbaum takes time to discuss the range of emotions we all feel, pointing out that the one emotion most socially acceptable for men to express is also what typically gets them into the most trouble.

Self-worth and Self-esteem. How do the men feel about themselves? What are their plans for increasing their own childrens' capacity to feel competent, loved and valued?

Power and Control. Edelbaum begins by having the fathers talk about examples from their own lives when they felt most powerless, either as a child or as an adult, such as being under the supervision of the DCF or the Department of Probation and Parole. He and the men then explore the feeling of power that comes with "positive decision-making, especially as it relates to their children."

Stress. Edelbaum helps the fathers become aware of their own stress levels, then provides them with tools and tips for managing their stress in healthy ways.

Fun with Kids. After so many weeks of intense conversations, Edelbaum ends the class with examples of how fathers can have more fun with their kids. The men then reflect on the themes of the group that have been most memorable, and celebrate their accomplishments.

To find out more about programs for dads at the VNA Family Room, visit vnacares.org/fatherhood or contact VNA Fatherhood Coordinator Josh Edelbaum at edelbaum@vnacares.org or 598-7769.