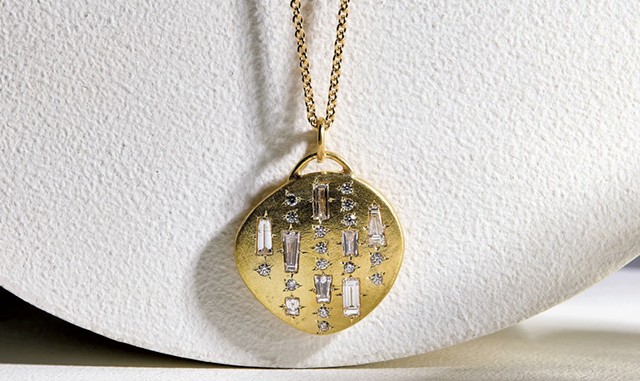 A downtown Burlington jewelry store is trying to turn a traumatic day into something positive.

Von Bargen's Jewelry was one of multiple Queen City stores hit earlier this month by a serial shoplifter who pocketed expensive pieces of bling. The stores banded together, trading info and images of the man, whom the police identified after publishing a photo of him. The cops later arrested James Lisaius, 30, and recovered the items, worth more than a combined $14,000. He's pleaded not guilty to five felony counts of retail theft.

The piece stolen from Von Bargen's was a gold medallion necklace worth $4,550, according to Ali Dumont, the store's manager. She also designs a line of jewelry, and the necklace, featuring round and baguette diamonds, was one of hers.

But rather than put the piece back out for sale, Dumont said the store will raffle it off, with proceeds from ticket sales going to the Howard Center's Street Outreach team.

Made up of about half a dozen members, the team partners with the police and businesses in downtown Burlington to help connect people with needed services, including housing, addiction and mental health treatment.

"There's a mental health crisis in Burlington, and the Street Outreach team are the first people we call when we're confronted with individuals experiencing mental health crises," Dumont said. "We appreciate them, and we value them, and this is our opportunity to give back to them."

Von Bargen's is working on a plan to sell raffle tickets for $50 each; Dumont said it'll cap sales at about 150 tickets to give buyers good odds. More information will be available at vonbargensjewelry.com.

The Howard Center, which has been extremely busy in the past few years, is thrilled about the impending donation, said Denise Vignoe, the organization's director of development and communications. While Street Outreach doesn't yet have a plan for using the cash, "they will always, always put it to good use in service of our community," Vignoe said.

The original print version of this article was headlined "Crown Jewel"