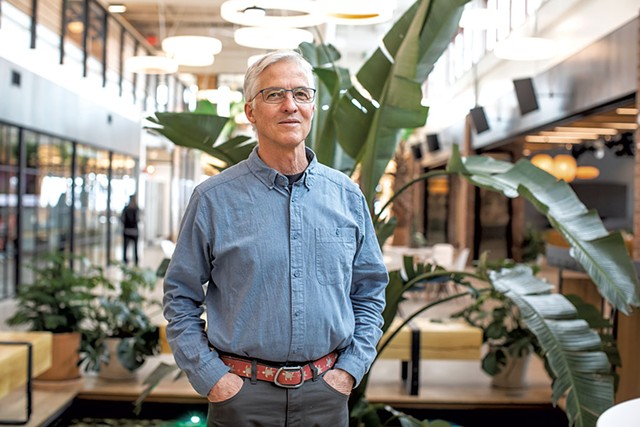 Bill Calfee had no work experience in the tech sector when he dreamed up Myti. Founded in 2020, the e-commerce platform will soon enable online shoppers to buy from retailers in their own communities and get their products delivered in two days or less. Consumers will have no membership dues, while local retailers — or "shopkeepers," as Calfee calls them — will be charged only a modest transaction fee.

Calfee, 64, believes that Myti can take a bite out of the massive revenues of Amazon, the world's third-largest company, and keep some of that money recirculating in local economies. According to his research, in 2020 Vermonters spent $423 million through Amazon and a comparable amount shipping products to Vermont.

"That's just short of a billion dollars extracted from Vermont each year," Calfee said during a recent interview at Myti's headquarters in Burlington coworking space Hula. "Just imagine if we could keep even 10 percent of that within the state."

Myti's aim, he said, is to serve people who would prefer to support local businesses but can't for reasons of cost or convenience. Think of the single mother who works three jobs and needs a new set of onesies for her infant, or the homebound senior who needs new socks but lacks the mobility to travel from store to store.

"Chittenden County ... [is] a virtual warehouse full of stuff, but nobody has easy access to it." Bill Calfee tweet this

Calfee also intends to tap the millions of consumers who have negative opinions of Amazon but still use it because they have few alternatives.

"Our target audience are the people who are already buying online," he said, "whether they feel guilty about it or not."

Is Myti a David taking on a Goliath — or a Don Quixote tilting at windmills? Calfee clearly saw himself as the former when he named the company. With fewer than a dozen employees, however, and plans for the website to go live in Chittenden County later this year before expanding to other markets, Calfee's goals currently seem mighty ambitious.

Calfee believes that Myti can compete on all three fronts. But he emphasized that he doesn't envision his business becoming merely a smaller, localized version of Amazon, with its own fulfillment centers and centralized shipping network.

Rather, he wants to create a hybrid model that combines the advantages of shopping in person with the speed and convenience of 21st-century e-commerce. And he wants to use the data Myti collects on consumer purchases to help local merchants invest their money and grow their businesses.

"Think of Chittenden County. It's a virtual warehouse full of stuff, but nobody has easy access to it," Calfee said. "If you want Legos and a toaster and a shower curtain right now, and you want to buy them locally, you have to find out who has them, go to their individual websites and make three separate orders."

Myti's algorithm will simplify the process by searching all of the Chittenden County businesses that are enrolled with Myti and carry Legos, toasters or shower curtains. Like other e-commerce sites, the platform will have photos, prices, descriptions and product reviews. As Myti grows, Calfee plans to add other search filters that might enable shoppers to, say, select businesses owned by women or people of color.

When retailers enroll in Myti — at no cost to them — they'll simply link their point-of-sale computer system to Myti's, enabling consumers to shop their inventory and see what's in stock.

Once the consumer makes a purchase, Myti's system will automatically adjust the store's inventory to reflect that sale. The shopkeeper will set the item aside and click a button indicating that it's ready for delivery, and a Myti driver will pick it up and deliver it to the customer's doorstep.

Key to Myti's success, Calfee said, is a feature not found on other e-commerce sites: a button that enables consumers to communicate with the shopkeepers via live video chat. Consumers will be able to ask merchants questions about each product, compare items and get recommendations before purchasing.

While Myti will also offer free returns, Calfee believes that the live video chat will make them less frequent. One of the main reasons consumers return items to Amazon, he explained, is that they order multiple versions of the same product, then choose the one they want and return the rest.

Such a system is wasteful and environmentally unfriendly, Calfee pointed out. Because Amazon frequently ships items long distances, it's often cheaper for the company to discard a returned item than to restock it in an Amazon warehouse or ship it back to the third-party vendor.

By contrast, all of Myti's goods will ship locally, so returned items will go back to the store they came from. Short shipping distances reduce not only the amount of solid waste going into landfills, Calfee said, but also greenhouse gas emissions, especially because he plans to use all-electric delivery vehicles.

Beyond cutting down on waste, Calfee believes the video chat feature will provide an intangible benefit. It will help "personalize and humanize" each transaction, he said, by reminding consumers that behind every local business is a human being who lives in their community.

"Myti's vision," he said, "is that online shoppers will develop personal relationships with their local stores and the people who work there."

The idea for Myti has been brewing for years. Ironically, it arose soon after a period in Calfee's life when he was as far from an internet connection as a human can get.

From 1981 to 2002, the Washington, D.C., native ran Water Works, a water treatment and consulting business in Manchester Center. Calfee spent another five years as an energy auditor and building science consultant, a job that he said gave him a passion for climate science and electric vehicles.

In 2008, Calfee and his wife sold virtually all of their possessions — including his business, the couple's two cars, his wife's house and some real estate — and moved aboard a 38-foot sailboat. After two years of sailing between Maine and the Bahamas, the couple and their then-6-month-old daughter set sail for the Caribbean, then on to South America. In 2014, the family left the Panama Canal for the Galápagos Islands, where they lived for three months before charting a 3,000-mile course across the Pacific Ocean to French Polynesia.

Upon his return to the United States in 2017, Calfee began planning his next business opportunity. He seized on the idea of creating an e-commerce company that builds community, addresses the climate crisis and serves local businesses rather than competes with them.

In 2018, Calfee returned to Vermont and set up shop in Burlington. Fortuitously, he moved in next door to Russ Scully, founder of Hula, the 150,000-square-foot technology hub and incubator on Lake Champlain, and the two became friends.

Creating a tech startup required technical expertise, which Calfee could hire, and investment capital, which he already had. His longtime passion for climate science had inspired him to make an early investment in Tesla, from which he reaped a tidy sum.

Though Calfee had no difficulty finding interested investors, few shared his values, he said, so he had been funding this project himself since Myti incorporated in 2020. Now that the company has plans to go live, Calfee set a goal of raising $2 million in outside capital from like-minded investors; in the last week alone, he said, he raised $200,000.

Funk, who teaches digital marketing at Champlain College, foresees big opportunities and equally big challenges ahead for Myti. He knows online sales, having worked for a number of e-commerce businesses; he's currently the e-commerce director at Ann Clark in Rutland, America's largest maker of cookie cutters. Ninety percent of that company's revenue comes from Amazon.

"Myti's business model sounds ambitious," Funk said, noting that most new entrants to the e-commerce industry start in one sector — think chewy.com for pet supplies — before expanding to a broad range of products. Amazon itself launched in 1995 as an online bookstore before becoming what founder Jeff Bezos later described as an "everything store."

Still, the desire for Amazon alternatives can't be underestimated. Funk noted that many Vermonters aren't happy with the company for a multitude of reasons, including its labor practices and its tendency to drive small merchants out of business.

"A funny aspect of all this is, you can be anti-Amazon, but there are over 2 million businesses selling through Amazon," he said. "People do tend to vote with their wallets, and even though they dislike Amazon, they still buy from them."

For Myti to succeed, Funk continued, the company will need to master a catch-22: Merchants won't sign up unless the company has enough customers to make it worth their time, while customers won't use Myti unless they can find a good selection of vendors there. (Though Calfee won't say yet how many shopkeepers have enrolled, Myti has already begun testing its system with 147 products currently sold by Chittenden County merchants.)

One Burlington businessman who's agreed to be a Myti "guinea pig" is Mark Bouchett, co-owner of Homeport, a home furnishings and lifestyle store on the Church Street Marketplace.

Bouchett described his store as "bazaar-ish": a warren of displays that encourage shoppers to linger and explore what's around each corner. While he acknowledged that online shopping seems antithetical to the browsing experience at Homeport, Bouchett said he's intrigued by the idea of "hybridized" shopping trips during which he can chat with customers online.

"It seems wildly complicated, but if that element works, it'll be brilliant," he said. While he's unsure how he and his staff will manage incoming video calls, he's willing to give it a try.

"It's almost all plus and no negative," Bouchett added, "because interacting with our customers is always a plus for us."

"If all goes swimmingly," he said, "we would be able to run in Chittenden County before the holiday season."

Calfee acknowledged that encouraging people to buy local could end up affecting Myti's bottom line by inspiring more people to shop in person. But that's a price he's willing to pay.

"We feel that, if we have brought you from [shopping] online to walking into the store," he said, "that's even better than buying through us."

The original print version of this article was headlined "Myti Ambitions"