A fortunate few have the knowledge, resources and determination to take all of these steps — and more.

Arthur Chukhman and Sarah Wittman turned their drafty pre-1877 duplex in Burlington's Old North End into a highly energy-efficient triplex, and throughout construction they used materials with a low carbon footprint. In addition, the third unit, attached to the back of the duplex, is the first certified passive house structure in the city.

"I know that this is a good, quality building and also good for the environment. It's maybe the most sustainable thing we could have done," Chukhman said. He's an architect and the sustainability coordinator at Duncan Wisniewski Architecture in Burlington, and he's a certified passive house designer. 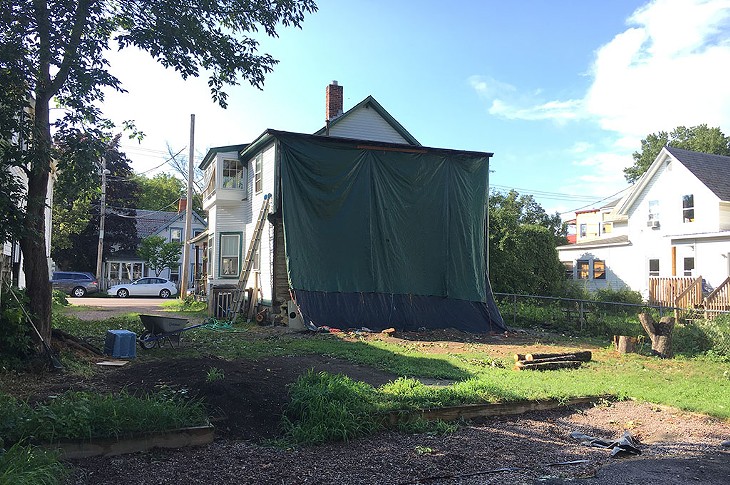 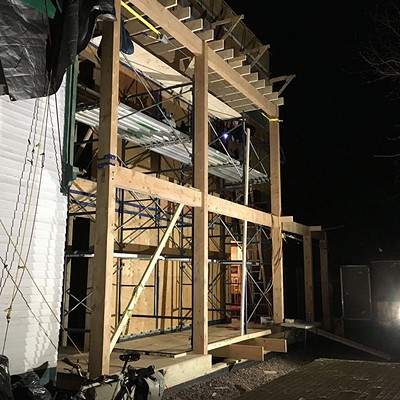 Green Mountain Habitat for Humanity built Vermont's first certified passive house in Charlotte in 2015. Since then, many more certified structures have been built statewide, including a Milton senior apartment building that opened in 2017, designed by architect Michael Wisniewski, co-owner of the firm where Chukhman works.

Wittman, 40, and Chukhman, 36, purchased the North Winooski Avenue duplex in 2014 and, while living in one apartment and renting the other, retrofitted the building with insulation, air sealing, and efficient lighting and appliances.

After the pair spent a year sketching ideas, Chukhman began drafting architectural plans for the addition in 2017. The following year, they broke ground and built the shell. Last winter, they worked with subcontractors on the interior, and in June they moved into the third unit.

From the sidewalk the addition isn't visible, but from the driveway its three stories loom large. A juncture where the original siding ends and the metal siding begins marks the transition from old to new, from fossil fuel to net zero. Wide wooden porches and matching glass doors grace new entrances to all three apartments on the southwest side.

"I wanted some equity among the three units," Chukhman said. "The doors ... are really heavy and have a tactile quality that I think is really nice to walk through. They let in a lot of light and are very energy efficient."

The new construction also added a third bedroom and a new bathroom to both of the old units, bringing each to 1,050 square feet. Though the older units don't meet passive house standards, they benefit from the addition's high-efficiency features, such as triple-pane windows and well-insulated walls.

The building generates energy with roof-mounted solar panels, and the new unit has LED lights and energy-efficient appliances, including heat pumps.

Inside the new 1,450-square-foot apartment, a generous foyer connects to a guest bedroom and a bathroom. Wide stairs of darkly stained maple lead to the second floor's master bedroom and bath. The latter features gorgeous dark-green slate that Chukhman painstakingly hauled from the former St. Joseph's Orphanage on North Avenue. (His architecture firm designed that building's renovation and adaptive reuse as the Liberty House apartments.)

Throughout the new unit, the aesthetic is sleek yet warm, minimalist yet classy. No quarter-round molding or trim hides imperfectly joined seams — because the seams are perfect — and no detail work distracts the eye.

The stairs to the third floor are open to the addition's high, vaulted ceiling, making the ascent feel like climbing into a tree house. That isn't too far from the truth. Though their unit shares walls with the other units on the first two floors, it extends an extra floor higher than the original building. A single 612-square-foot room spanning the length and width of the addition offers a bird's-eye view of the neighborhood.

"This space feels luxurious," Chukhman enthused. "It's actually the only space I can think of, ever, that I've been in where the top floor — kitchen, living, dining — has this many windows on all four sides."

"If you get a change in light, like suddenly the sun comes out from behind a cloud, this place just glows," Wittman remarked. "It's really special."

To the northwest, large windows reveal an outdoor terrace where the couple will grow potted vegetables in the summer. In the other directions, strategic fenestration offers unfettered views of surrounding trees and rooftops without intruding on neighbors' privacy.

"When you're looking out the length of the house, you don't really look down at people," Chukhman said. "You actually don't see your neighbors, and they don't look up to see you walking around."

The space's elegance belies hundreds of decisions the two made to meet passive house standards and to source materials responsibly. The latter wasn't required for certification — it was entirely their choice.

Passive house standards are "about getting to a certain level of energy efficiency, not how you got there, per se," Wittman explained. "This project is very much about how we are getting there."

She and Chukhman are avid environmentalists who ride bicycles "everywhere" and rarely use their car. Wittman, who holds a PhD in biology and lectures at the University of Vermont, specializes in community ecology, sociobiology and plant-animal interactions.

To meet passive house standards as well as their own ecology goals, they built the addition without using foam insulation, for example. Though foam is inexpensive and widely used, "all foams have a pretty big carbon footprint," in part because they're petroleum-based, Chukhman said. Foam products make a home more energy efficient, but the more of it that's used, the longer it takes to generate ecological payback in the form of energy savings, he explained.

"We're trying to solve global warming now. We don't have 20 to 50 years" to wait for that payback, he said.

The couple also used building practices that are easy to duplicate, in hopes that others in the industry will follow suit. "We took a very typical construction method and added to it, beefed it up a bit," Chukhman said.

For example, the two-by-six-inch wall studs are filled with dense-packed cellulose (made primarily of postconsumer recycled newsprint) and covered with plywood sheathing that's taped and air-sealed — common building practices. But Chukhman and Wittman added a layer of six-inch fiberboard called Gutex to the sheathing.

"It's made of recycled wood fibers from the furniture industry and is embedded with a paraffin wax that makes it water resistant, so that you don't have to use a house wrap," Chukhman said. "Because it's made from an organic material that would otherwise go into a landfill, it's effectively storing more carbon than it takes to make it."

Gutex was the most sustainable, replicable and cost-effective way for them to achieve a wall R-value (an efficiency measure) of 45. But few solutions are perfect. The fiberboard is currently only available from Germany and was shipped to Vermont, creating a transportation carbon footprint. The couple decided the impact was worth it to showcase Gutex in an emerging market. Since they started their project, a company called GO Lab has begun work to open a fiberboard insulation plant in Maine.

Other decisions were less complex. For example, they used hemlock for framing and white cedar for siding, which were sourced locally and store carbon, as do all plant-based products.

In addition to managing the project's finances, which included a commercial loan, Wittman researched products and organized copious amounts of paperwork for the passive house certification. She had to document everything from their water-efficiency and air-quality programs to showing that their paint, cabinetry and flooring contained low levels of volatile organic compounds, or VOCs.

Whether or not other Vermonters build passive houses or use eco-friendly materials, Wittman and Chukhman hope their project is emulated in a third way: favoring urban infill over suburban sprawl.

"It's kind of like fast food versus slow food," Chukhman said. "It's much harder, it takes more time and energy to design and build" a unit like theirs, "but I think it ... creates better communities, rather than tearing down a whole block and building a giant building ... I think this is the right kind of density and creates really nice neighborhoods."

Are there any challenges to living in their new unit? Wittman is occasionally annoyed when she realizes she's forgotten something two flights down, but Chukhman's response was unequivocal: "Negative things? No, I really like it," he said with a laugh. "It's like I designed it."