A Burlington Chef with Abenaki Heritage Makes His Own Harvest Meal 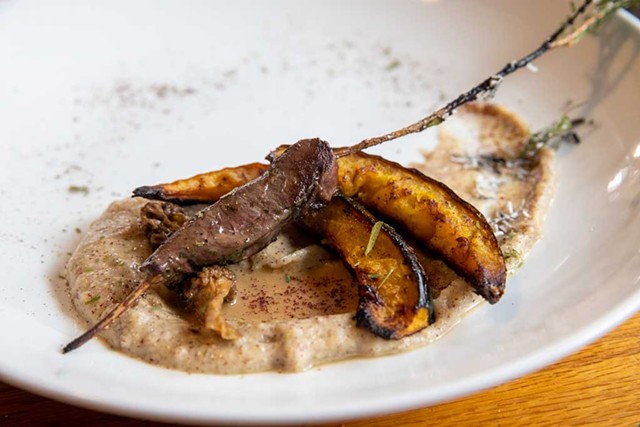 Jessee Lawyer has nothing against roast turkey, stuffing, mashed potatoes and pumpkin pie. "It's the best fucking meal in the world if it's done right," said Lawyer, 35, while taking a smoke break from cooking in his backyard in Burlington's New North End on a recent Saturday morning.

Lawyer spent the last five years as executive chef of the now-shuttered Sweetwaters on Church Street, where he co-led and then led the preparation of at least 1,000 meals for the restaurant's annual free Thanksgiving dinner. After the cooking and serving wound down, "the last thing I wanted to eat was turkey," Lawyer said with a laugh.

Lawyer now works for the Farmhouse Group, which is renovating the former Sweetwaters space into a new home for its Pascolo Ristorante. This week, once again, he'll help cook more than 1,000 holiday meals to be donated and distributed through community partnerships, including Vermont Everyone Eats.

But Lawyer, who is Abenaki on his father's side, prefers to call the free meal a "community dinner" and leave Thanksgiving out of it. He's glad many people now recognize that the tale of a friendly feast shared by Pilgrims and Native Americans is problematic at best.

"That pretty little story they tell in elementary school is bullshit," Lawyer said. "That story got dark pretty fucking quick."

Mythical Thanksgiving repasts aside, fall is the time for traditional harvest ceremonies, Lawyer said. When he has the opportunity to gather with friends and family for the holiday, Lawyer chooses to focus on gratitude for nature and its bounty — something he does whenever he engages with Native craft and food traditions.

"They save me the heart, the tongue, the moose nose — the parts most people don't want." Jessee Lawyer tweet this

On the Saturday morning when Seven Days visited his kitchen, water streamed from Lawyer's kitchen faucet over a frozen, vacuum-sealed deer heart. The chef was thawing the organ to cook a distinctly different thanksgiving meal — with a lowercase T.

Lawyer said the heart came from a roadkill animal salvaged by the Vermont Fish & Wildlife Department, for which he has presented online cooking demonstrations in partnership with Rural Vermont.

"They save me the heart, the tongue, the moose nose — the parts most people don't want," Lawyer explained.

Though the chef eats a lot of wild game, he doesn't describe himself as an accomplished hunter. "I've never shot a deer, but I have shot at deer a number of times," he noted dryly. He's more adept at hunting smaller game, such as rabbits, squirrels, duck, grouse and partridge.

A shallow wooden bowl full of cedar twigs and a bag of finely ground flint corn flour sat on Lawyer's kitchen counter. He fetched a winter squash and a jar of dried morel mushrooms from his small dining room, which is full of mementos and talismans of his Indigenous roots.

An animal hide that belonged to his late father is rolled in a corner. Jars of mushrooms, herbs and mullein for tea line shelves. Around the windows hang cobs of heirloom corn grown by a friend, ash splints for weaving baskets and what Lawyer described as his "pitiful tobacco harvest."

Lawyer grew up in Richford. His Abenaki paternal grandfather, Peter Lawyer, worked as a cobbler, handyman and farmer in Québec and then Alburgh. He made baskets from coiled horsehair or ash splints and could carve a chain out of a single piece of wood, his grandson recalled, marveling.

Lawyer's inherited handicraft skills were evident from a few examples he shared: an intricate pipe carved from catlinite and a small bow he made for his son from white ash with a bow string braided from goat intestine.

By contrast, the family didn't pass down food traditions.

Lawyer's French Canadian mother's family hunted and ate venison, bear and moose. "I did grow up with those traditional foods in a nontraditional context," Lawyer said as he whisked corn flour with water and salt to make corn mush to serve with the heart.

Even as he pursued a cooking career, Lawyer didn't explore Indigenous ingredients and techniques until 2017, when he recalled having a realization: "Hey, start cooking your food. Stop cooking other people's food."

Lawyer began reading and making connections with other Indigenous chefs around the country, mostly through Instagram. In May 2019, he was invited to prepare a meal at Dartmouth College alongside Sean Sherman, a James Beard Award-winning chef from Minneapolis and a leader in Native American cuisine. The experience was transformative, Lawyer recalled.

"When you think of Indigenous foods, you don't think of it being highly intricate, even though something like Three Sisters Stew of beans, corn and squash is — from growing it to cooking it," he said. "It's more than just roasted meat over a fire."

In fall 2019, Lawyer began offering specials at Sweetwaters that featured Native ingredients, such as seared duck breast with toasted cornmeal polenta, blueberry glaze and sunchoke chips. But after a while he stopped, Lawyer said: "It didn't really seem right, because no money was going into Indigenous hands."

Although Lawyer has since cooked at a few benefit and educational events, he said he is now more focused on cooking for himself and sharing what he learns through his Instagram account, @the_dawnland_kitchen.

"I'm just cooking and creating and trying to make tasty things and trying to inspire people to cook wild game," Lawyer said. "I'd love my target audience to be just Indigenous folks, but that's not the case."

Eating wild game and other wild foods, Lawyer said, can help address food insecurity, which heavily impacts Indigenous communities. "Native food systems all across this country have been ravaged," he said.

On Instagram, Lawyer met a kindred spirit in Jeff Stewart, a chef and member of the Penobscot Nation who grew up near Old Town, Maine.

Unlike Lawyer, Stewart, 43, is an experienced hunter. For his family, he said, eating wild game was not so much about tradition but about sustenance. "It was dinner on the table every night," he said.

As their friendship grew, Stewart sent Lawyer a moose scapula, and the Vermont chef repaid his friend by carving him a ceremonial pipe. In fall 2020, Stewart invited Lawyer to moose camp.

Eighteen minutes into the first hunting day, they had their moose. The pair set about breaking down the animal; they were most excited to cook the nose.

"It's fallen out of fashion, but 200 years ago, those fats and oils — you needed them to survive," Stewart said. "Food is one of those things like language. If no one is cooking moose nose, that knowledge could be lost."

The friends have since cooked several moose noses together and traveled to Alaska to fish for whale and halibut with other Native chefs.

"To find someone like Jessee, where there's this genuine respect for each other and for our culture, that's really special," Stewart said.

Lawyer pointed out that, while some tribal communities have maintained foodways, it is hard to know exactly how Indigenous people cooked in past eras. Most documentation comes from accounts written by white Europeans. "The way they tell our story is different than how we would tell our story," he said.

In his kitchen, the chef finished up a sauce of dried morels reconstituted in bone broth with a little cream and homemade maple vinegar. He skewered thin strips of venison heart on the cedar twigs, sprinkled them with salt and scooped some bear fat from a jar onto a griddle.

The fat is very mild, he assured this reporter, and has many functions. "You can use it on your hair and skin, to condition your boots and oil guns," he said.

While Lawyer is not a purist, he tries to eat as many wild foods and Native varieties of cultivated ingredients as he can. Jars of pickled ramps, pickled fiddleheads, black beans, Jacob's Cattle beans, maple sugar and wild rice lined a kitchen shelf.

"I cook with bear grease every day," Lawyer said. Eating traditional foods, he continued, is "not only a way to get closer to my culture [but also] closer to myself. I don't feel as nourished from an Italian sub. This is something my ancestors have eaten, something that let them thrive."

Unlike the handicrafts Lawyer squeezes in when he can find the time, eating a Native diet is different. "I can practice that every day," he said.

Lawyer plated his thanksgiving meal like a chef: spreading an arc of corn mush on a white plate, topping it with half-moons of roasted squash, dusting the plate with sumac and dried ramp powder, and setting a skewer of grilled heart on top. With a final flourish, the chef lit the cedar foliage on fire and explained that the ash would become another seasoning.

The dish was restaurant-worthy — no surprise — with many layers of sweet, earthy, tangy and smoky flavors. As I savored the rich, lightly chewy venison heart, it felt like the nutritious meat was immediately infusing me with energy.

We needed that energy on a subsequent futile two-and-a-half-hour squirrel hunt. Despite offering ceremonial tobacco to the land and the animals, we saw zero squirrels, though we did spy a large, immature bald eagle perched on a branch.

The sighting, Lawyer said, epitomizes how the value of hunting goes beyond obtaining food: "You're more at one with your surroundings. You pay a lot more attention, even if you don't catch anything."

Despite the lack of squirrels, seeing the eagle soar from a tree "made my day," Lawyer said — and that was something to be thankful for.

Correction: The partnership behind Jessee Lawyer's online cooking demonstrations is between the Vermont Fish & Wildlife Department and Rural Vermont.