A regal Victorian façade and twin gargoyle-like door knockers greet guests at Made INN Vermont, but the imposing exterior only hints at what awaits inside. Since proprietress Linda Wolf opened the eclectic bed-and-breakfast in August 2012, it's become a notable destination for Queen City visitors seeking both elegance and funk. 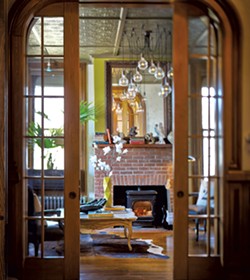 "We consider this entire inn a work of art," Wolf says, leading a reporter through the giant, refurbished house on South Willard Street. The B&B, Wolf notes, was originally the idea of her daughter, Brooklyn-based artist and jewelry designer Shelly Voorhees. The two worked together to bring their vision to reality, beginning with their purchase of the building in 2006.

Built in 1881 as the residence of a granite excavator, the house retains many of its original features, from curved entryways and luscious, thick bannisters to paneling and wooden floors. According to Wolf, a medium who once stayed there alleged that the mansion has also retained the ghostly presence of the excavator's wife, Elizabeth. "I've not personally met her," Wolf says wryly.

As the inn's name suggests, an abundance of local finds are woven into its expert décor. An industrial 1930s light fixture from Conant Metal & Light illuminates the entryway, and antique claw-foot tubs were salvaged from the ReSOURCE Building Material Store. Wolf proudly points out a "fabulously beautiful" original bathroom set, sourced from the Architectural Salvage Warehouse in Essex Junction. Several of the inn's ottomans were upholstered with fabric from Johnson Woolen Mills.

Visitors may find themselves drawn into the common space as if by magnetic pull; the room is a visual treasure trove. A revamped Queen Anne-style table with a concrete-fill top offers a broad selection of coffee-table books, as does the built-in library opposite. In fact, art- and design-themed books and magazines are plentiful throughout the entire house.

"I seem to have a collecting thing," Wolf admits. "I see so much potential in everything I pick up."

The treasures she employs as décor include vintage globes, a Plexiglas-encased portable light switch that works as if by magic, kewpie dolls and foam wig forms. Original artwork includes a tabletop figurative sculpture by Voorhees and many splashy, gestural paintings by LA and Montréal painter David Hinnebusch.

The large common area gives way to a cozy kitchen fully stocked with goodies, including special Vermont treats such as Heady Topper and Focal Banger for adult guests. The kitchen's back door opens onto an enclosed patio and hot tub.

The building's second story houses the inn's four high-ceilinged guest rooms, each with its own character and charm. A private bathroom is down the hall. Guests in Room 904 can take in the colorful scrawls of past guests on the chalkboard wall, perhaps while seated in the Eames chair. Each room has its own turntable and LP selection. The record player niche in Room 903 is artfully "tiled" with Alchemist coasters. 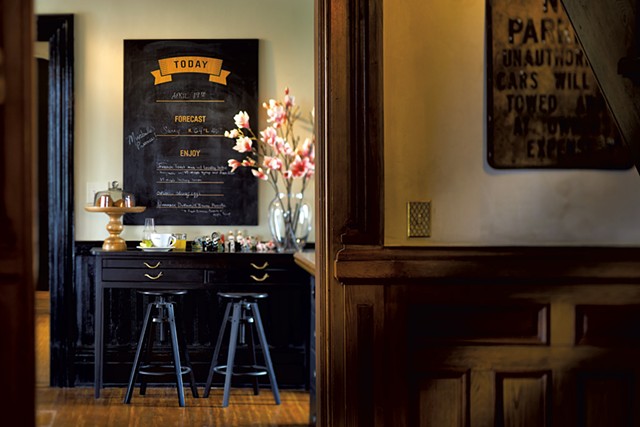 Continuing up the curved stairway past the living quarters is the manor's enclosed widow's watch, set atop the inn like a cherry. With a million-dollar view of downtown and Lake Champlain, the small enclosure is equipped with chairs, a tabletop checkers set-up, telescope and binoculars — should a guest care to bird-watch or get their Rear Window on.

Not your typical Vermont B&B, Made INN Vermont brims with thoughtful design and sass. Guests no doubt leave with a good impression.