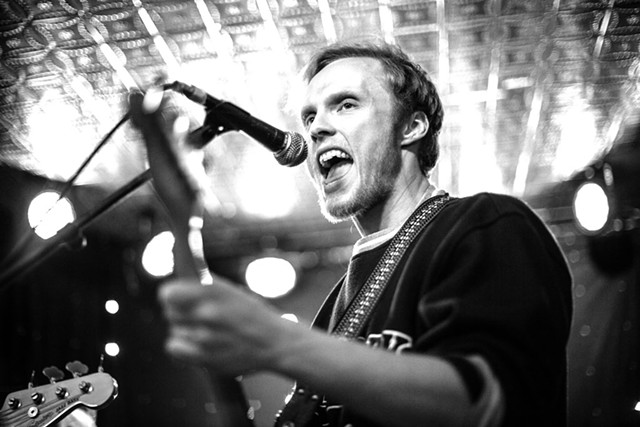 Seven Days frequently receives tips about upcoming local album releases — sometimes well in advance of anything concrete we can report. After following up on some solid leads we've gotten this year, these 10 Vermont-based bands/artists gave us the skinny on their forthcoming works.

One of the innumerable bands born out of the University of Vermont, self-described disco-punk outfit Bison entered the scene two years ago with their debut EP, PSB — presumably named for one of Burlington's most popular oases of adult libations, Pearl Street Beverage.

They recorded their album Get In at the Gnomehaus in Williston — the stomping grounds of eclectic, sax-centric hip-hop/EDM band Gnomedad.

The lead single, "Everything You Say and Do," is a delightful portent of things to come: Guitarist Charlie Hill's insouciant vocals melt over caffeinated drum beats and stinging licks and riffs.

Will Andrews, trumpeter for jazz/hip-hop outfit Japhy Ryder, is just about ready to drop Save Some, his next installment as Willverine. The electro-soul singer-songwriter served up his last album, the maddeningly brief Show Up Late, at the tail end of 2016.

Recorded and coproduced with Eric Maier at Future Fields, the new record has "a lot of big orchestration," Andrews writes via email. If Show Up Late is any indicator, we can expect cinematic strings and horns galore.

"This record is about growing up and figuring out how to deal with your past, while looking forward to setting yourself up for the future," Andrews writes.

I know what you're thinking: Didn't Eric George just release an album? That he did: the gorgeous Smoke the Fire Gives, which came with a fully illustrated, hand-sewn songbook featuring lyrics and guitar tabs.

Only a few months later, Burlington's prince of twang is back with another similarly packaged product called Not About Nightingales. George crafted 300 hand-stitched copies of the new songbook, and the accompanying record, after successfully raising funds via Kickstarter.

In an email, George writes, "I'm starting to figure out how to use my energy ... in the most constructive and efficient ways possible." He goes on to describe Not About Nightingales as like "guests at a dinner table having a meaningful conversation." It features guest appearances from Pete Sutherland, Shay Gestal, Monique Citro, Luke Hausermann, Sean Keenan, Addie Herbert and Jocie Adams of Arc Iris.

Alternative R&B songwriter/producer Guthrie Galileo follows up his 2014 album The Ifandbut with a seven-song EP called Modern Day Ripples. As a teaser, he released its first single, "Flowers," in June. You can hear the "ripples" almost instantly as oceanic field recordings underscore dainty harp wavelets. Then the song takes shape as a pulsing, spaced-out bump-and-grind session.

"The album is heavy with water symbolism, both lyrically and melodically," Galileo writes in an email. He presents a curious metaphor in which he likens people and their life experiences to stones cast upon the water. "All stones are shaped considerably by the water around them," he writes.

Story of an Immigrant

Originally from Costa Rica, "Mal" Maiz Vargas Sandoval is best known for hosting the formerly weekly Latin Sessions at Burlington's Radio Bean. He's probably the only musician in the area whose signature style is cumbia. Though its origin can be traced to Colombia, the West African-influenced genre is wildly popular from Argentina to Mexico.

Mal Maiz just finished mastering his debut record, Story of an Immigrant, at Concordia University in Montréal. He plans to press the seven-track EP to vinyl at some point this fall. Maiz and his Afro-Cumbia Orchestra will present the album in its entirety at an album-release event in August.

In February, riot-rockers Rough Francis dropped a DIY cassette tape — a sort of amuse-bouche for their upcoming full-length album. Its no-holds-barred, steadfast fury was the rock pick-me-up we needed in the dead of winter. And now, more than four years after their debut, Maximum Soul Power, Rough Francis' second full-length album is recorded, mixed and waiting in the wings.

Front man Bobby Hackney Jr. writes via email that the new album features "dead (and alive) guest celebrity appearances who shall not be named at this time." Um ... yay? Consider us tantalized — and a little weirded out.

Despite decades of experience, country music aficionado Brett Hughes has never released a solo record — until now. After a successful crowdsourcing campaign, Hughes announced in April that he was heading to Brad Jones' famed studio Alex the Great Recording in Nashville, Tenn.

With a working title of Maybe I Will, the 11-track album features a horde of Vermont-based talent: pedal steel master Brett Lanier, fiddler Caleb Elder, and vocalists Marie Claire and Kat Wright, as well as roots duo Dwight & Nicole.

"I've been sitting with and listening to the tracks," Hughes writes in an email. "I'm incredibly happy with what we've produced thus far."

On New Year's Eve, Madaila surprised their audience with a brand-new collection of songs, just months after releasing their sophomore LP, Traces. The new work, an EP called Songs in C, was ambiguously scheduled for a release at some point in 2017.

In an email, Madaila front man Mark Daly writes, "Definitely some soul vibes, and [it's] also a little more simplified than ... Traces.

"Songs touch on love, growing up, listening to the radio in the '50s," he continues. "Even a slight politically charged response to some recent horrendous events — i.e., Trump."

Singer-songwriter Ivamae has been building buzz since she dropped her three-track Ocean Studios EP in late 2016, which she coproduced with Thomas Pearo. For her LP, she enlisted Rough Francis' Urian Hackney to coproduce.

We can expect more of the raw intimacy heard on her EP. As Ivamae puts it in an email, "I really aim to invoke a personal reaction out of every listener. Hit 'em in the heart, ya know?"

She adds that her still-untitled debut LP will feature a live choir, which she's been dreaming of for years. Expect this holy ensemble to feature some notable locals — though Ivamae is tight-lipped about who they are.

Miriam Bernardo has been working on her debut for the last three years. The Steady Betty singer concocted the project with singer-songwriter and producer Peg Tassey — who recently came out of retirement after a 12-year hiatus from performing.

Since the album comes from the minds of so many different songwriters, Bernardo doesn't claim that it has a particular sound — which makes it all the more intriguing.

"I am the connective piece, conduit of cohesiveness in all of it," she writes in an email. "And, man, has it challenged me in the best way."