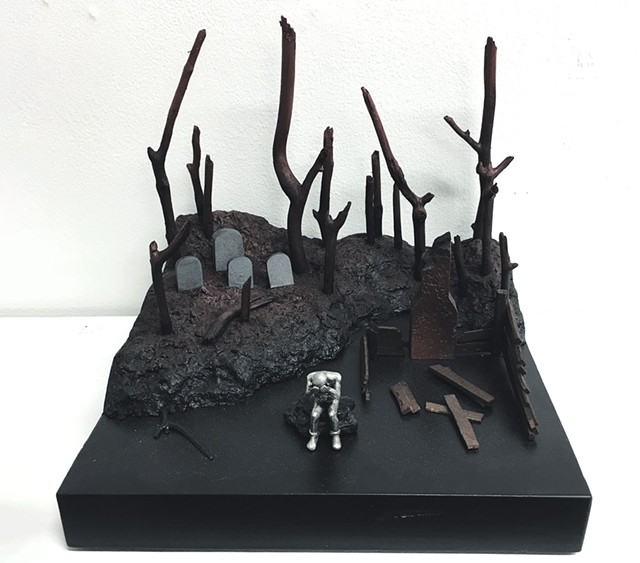 The Halloween-inspired exhibit "Dark Matter" is a popular one for Burlington's S.P.A.C.E. Gallery, evident in the attendance and the huge number of artworks submitted. The creepiness quotient is often clear in their titles, such as "Metaphysical Studies in Human Decomposition" (Thomas Stetson), "Coat Hanger Abortion" (M.M. Moyer) and "Trump" (Jason Gorcoff). The whole exhibit is practically a cry for help.

Mark Eliot Schwabe believes his "Futurescape" sculptures are the scariest, because reality: "From my perspective, there's nothing darker than the impending end of the world," he said during a gallery visit, "if we don't do something about it."

By "it," he means the climate crisis. "I'm hoping that by expressing my alarm, others will get alarmed, too," Schwabe said.

If any viewer is not sufficiently anxious already, beholding Schwabe's mixed-media assemblages might tip the scale. Arranged on a wood base painted doomy black and bloodred, cut twigs form a tiny wasteland; in it, pewter figures are shaped in postures that convey unmistakable despair — or death. Lumps of charcoal represent a source of global warming.

In "Futurescape 8: City Park, Homage Rodin," for example, a male figure posed like Auguste Rodin's "The Thinker" sits on a bench made of wood and pewter. Blobs of coal are nearby, as if they had fallen from the sky. In "Futurescape 13: Forest, Family, Home" (pictured), a figure sits directly on a piece of coal, holding his head in his hands. Behind him is a small cemetery; beside him, the ruins of a house.

These works have no truck with subtlety, as befits the artist's sense of urgency. The narrative composition and craftsmanship of his sculptures, however, reveal a practiced and delicate hand.

Schwabe was the first artist to rent a studio at S.P.A.C.E. when it opened in 2009 and has remained there since. He makes primarily small, intricate steampunk-centric brooches and sculptures, some of which are carried at Frog Hollow Vermont Craft Gallery. His "Powerful Women" series sells steadily, he said.

Schwabe learned to finish metal castings as a teenager — his father made gold jewelry in a home workshop on Long Island for such high-end retailers as Cartier, he explained. Since age 18, Schwabe has favored working with pewter, a softer metal with a lower melting point.

He launched his "Futurescape" series just this year and has made 14 so far. Viewers can see them in "Dark Matter" through October 28, in Schwabe's studio and at markeliotschwabe.com.