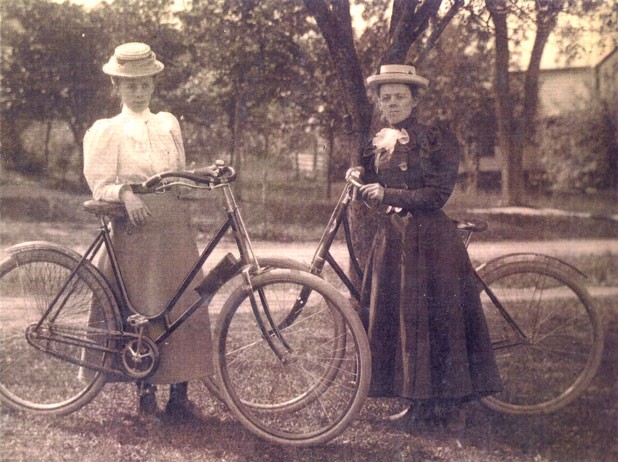 It was easy for a merry band of riders to imagine the future of bicycling in Burlington last week as they took, ironically, a pedal into the past.

About 35 cyclists mounted up on a sunny Saturday at Old Spokes Home bike shop on North Winooski Avenue for a 9-mile, 3-hour history tour led by University of Vermont anthropologist Luis Vivanco. Wearing a period costume of striped woolen vest, knickers and button-down cap, he paused at a half dozen locations to lecture on their significance to cycling in the Queen City in the late 19th and early 20th centuries.

It was impossible not to compare and contrast Vivanco’s narrative with the present-day circumstances for two-wheelers — as detailed in a document recently released by the mayor’s office.

At the southwest corner of College and Church streets — once the site of a five-story YMCA that included a lounge for “wheelmen” — Vivanco noted that by 1900 Burlington’s government had “invested heavily in walking and biking infrastructure.” The city at that time boasted 39 miles of sidewalk and 56 miles of crushed-stone and oiled roads, which were effective in limiting the dust kicked up by horses and “scorchers” — the tag applied at the turn of the century to reckless, rule-breaking bikers.

Fast-forward to the Burlington “Go for Gold” Walk-Bike Blueprint released by Mayor Miro Weinberger during his May 16 “multimodal tour” of downtown. The document suggests that the passage of time is not necessarily synonymous with progress. “The biggest area of needed improvement is in infrastructure for walking and biking: safer crosswalks, continuous bike lanes, and more,” declares the document prepared by the Weinberger administration and two cyclist-pedestrian advocacy groups.

A decade ago, the 10-page blueprint notes, Burlington was replacing less than one mile of crumbling sidewalks per year. By 2011, the annual total had increased to 2.3 miles, but “overall sidewalk condition is still deteriorating faster than repairs are being made,” Go for Gold points out. It suggests, paradoxically, that this inadequate repair effort “could serve as a model for similar investment in bike-related infrastructure.”

The blueprint, coauthored by Local Motion and the Burlington Walk/Bike Council, appears self-contradictory in other parts, as well.

For example, it describes the city’s existing cycling infrastructure as “mostly solid.” But the document goes on to compare Burlington’s biking amenities unfavorably with those of two small cities cited as peers: Missoula, Mont., and Corvallis, Ore. The assessment extols Burlington’s 17 miles of paths for self-propelled transport and recreation, but notes that Missoula’s nonmotorized network totals 107 miles.

Referring to Go for Gold as “an aspirational document,” Weinberger said in an interview last week that his administration is “fully committed to major improvements” in cycling infrastructure. The mayor pointed to a redesign of the long-stalled Champlain Parkway to make it more safely accessible to bikers and walkers, as well as to his own telegenic efforts, such as the multimodal tour, to model alternatives to automobiles.

Weinberger also called attention to the advocacy involvement of Dealer.com, the city’s leading source of job growth in recent years and a favored workplace for techies who tend to travel on two wheels.

“If we’re going to continue growing jobs of this kind, we need an excellent biking and walking infrastructure,” Weinberger declared.

But Go for Gold — the title refers to Burlington’s ambition to win recognition from national ratings groups as a gold-level cycling and walking city — offers nothing in terms of specific biker and pedestrian infrastructure improvement projects. The document is long on visionary generalities, short on concrete proposals.

“We’ve been ‘aspirational’ for quite a while,” Vivanco scoffed in an interview following his bike-history tour. “If we’re really going to go for the gold, Burlington has to get serious about filling the gaps and creating a citywide bike network while making it safe.”

Safety is an issue on the mind of almost every cyclist. Three of the women who participated in the history tour — Vermont Public Radio employees Heather Dieringer and Francesca Orsini and urban planner Samantha Tilton, who’s seven and a half months pregnant — all expressed worries about cycling between Burlington and Fort Ethan Allen in Colchester. The women pointed to the life-threatening dangers cyclists face on Route 15 in particular. Years of studies have produced no improvements for bikers on that high-speed stretch of roadway.

Motorists struck a total of 785 Vermont cyclists and pedestrians during the past three years, according to the state Agency of Transportation. One biker and 18 walkers lost their lives in those incidents.

“Burlington does not have a specific program in place to reduce the number of cyclist/motor crashes,” the Go for Gold report states.

Cities that have succeeded in making cycling safer and more accessible “combine initiatives from above with pressure from below,” Vivanco said. Burlington has excelled in the latter and lagged in the former, he suggested.

The author of Reconsidering the Bicycle: An Anthropological Perspective on a New (Old) Thing said Burlington is blessed with a strong set of biking and pedestrian advocacy groups and individual activists. “That’s our big strength,” Vivanco declared. “Our big weakness has been the lukewarm support given at the top of city government.

“There’s been a big disconnect between the recognition we get and what we’ve actually accomplished on the ground,” Vivanco added, referring specifically to the “silver” designation for cycling awarded to Burlington in 2011 by the League of American Bicyclists.

On the history tour, Vivanco described the league as “the most powerful advocacy organization for biking in the country,” but he also mentioned its “bigoted” past. Known until 20 years ago as the League of American Wheelmen, the organization discouraged women from joining and flat-out barred nonwhite males from membership, Vivanco noted. Not until 1999 did the league disavow its racist policy, he said.

Historical antipathy toward women cyclists may be seen, in part, as a reaction against the large number of females who took to the road on their own in the 1880s and 1890s in Burlington and elsewhere. The bicycle, Vivanco observed, was “a liberatory machine for women.”

In fact, cycling was wildly popular among Burlingtonians of both sexes. Pausing at the southwest corner of Bank and Church streets — site of the former Howard Opera House — Vivanco said that in 1896 so many men and women cycled to shows that the opera house’s proprietors built a separate storage space for bikes.

More than a century ago, several cycle sales and repair shops operated in the North End and on Church Street to cater to the city’s burgeoning biking community, Vivanco noted during the first-of-its-kind history tour, which was sponsored by Preservation Burlington. Other stops included the city’s first bike shop — at 28 Loomis Street — and the former home of M.C. Grandy, a Burlington bicycle entrepreneur, on Brookes Avenue.

Vivanco also spoke of other forms of transportation that faded from the scene as cars muscled in. On the corner of Ward Street and North Avenue, he called attention to the city’s first trolley route, which began operating in 1885 as a horse-drawn conveyance. It switched to electricity three years later, but not without encountering some 19th-century NIMBYism. Vivanco told of the opposition to electrification led by Sen. George Edmunds, a resident of South Union Street, who feared his health might be harmed by toxic “gases” believed to be emitted by electrical wires.

Burlington’s 21st-century cyclists may likewise have to contend with NIMBYism if all their aspirations are to become realities. For now, random motorists inclined to road rage are pretty much the only locals who hate on cycling.

But Burlington bikers could eventually face an organized backlash against cycleways of the sort now appearing in New York City. Mayor Michael Bloomberg has transformed transportation in the city by adding hundreds of miles of protected cycle routes and car-free walkways, but some New York drivers are demanding a return to the old, auto-centric days.

Weinberger acknowledges the possibility that something similar could occur in Burlington. “There could be strong opposition eventually,” the mayor says. “One reason why the infrastructure has gaps in it is that we’ve put in place all the easy parts. It’s the harder stuff we’ve yet to do.”

Cycling is probably more popular in Burlington today than at any point since its golden age a century or so ago. The establishment of bike-themed Maglianero Café on Maple Street and the presence in the city of two bicycle manufacturing businesses — Terry and Budnitz Bicycles — testify to Burlington’s intensifying love affair with this new (old) thing.

Cycling advocacy leaders say occasional as well as daily bikers must become activists if they want to put meat on the bones of Go for Gold. They suggest that pressure be applied in particular to the city’s department of public works, which has been growing steadily more responsive to alternative transportation initiatives. The Burlington Walk/Bike Council, a city advisory and advocacy body, serves as one potential route to that end. The council has a meeting coming up and welcomes new participants.

Today’s Queen City cyclists might consider a campaign slogan of “Forward Into the Past!”