Some Vermonters see it as a point of pride that the designer behind the grounds of Shelburne Farms, with its sinuous roads leading past planned fields, forests and Lake Champlain, was Frederick Law Olmsted. But even Vermonters may not know that Olmsted — the country's first self-described landscape architect and founder of the profession — designed three projects in the state, and his sons' successor firm, Olmsted Brothers, did 15 more.

This year is the 200th anniversary of Olmsted's birth, and the occasion is being fêted around the country. In Vermont, the state legislature declared April 26 Frederick Law Olmsted Day. Planned events in celebration of the bicentennial include a touring exhibition, a Shelburne Farms walking tour, a film, an author's talk, and a panel discussion featuring local and national experts. The catalyst for all this activity is Olmsted 200, an initiative of the Washington, D.C.-based National Association for Olmsted Parks in partnership with nine other nonprofits and organizations.

It's hard to overstate the importance of Olmsted in American history. Radically for his time, even before the Civil War, he conceived of landscapes as a key component of democracy. And he had the talent and writerly chops to convince an industrializing country that the public needed landscapes, both planned and natural, for its civic and bodily health.

Olmsted achieved international fame in 1858 with his design, with Calvert Vaux, for New York City's Central Park. The project gave tired workers and high society alike an 843-acre retreat in the middle of Manhattan — an unprecedented offering at a time when such parks existed only as private estates of the wealthy. A lifelong advocate of land conservation, Olmsted went on to argue for what would become the national park system and to design hundreds of public and private landscapes around the country. 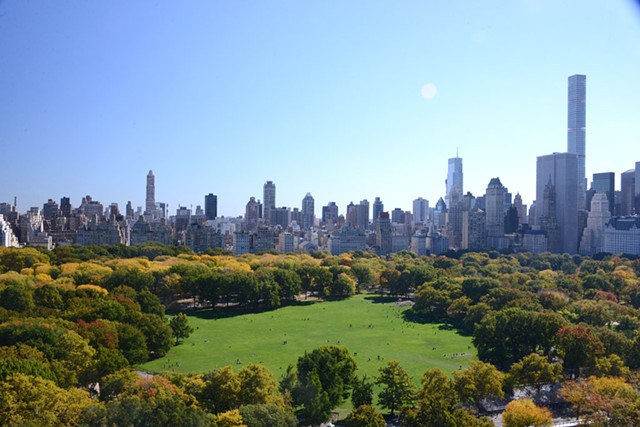 Greg De Vries, managing partner at Heritage Landscapes in Charlotte, researched Olmsted projects in Vermont on behalf of the Vermont Chapter of the American Society of Landscape Architects. Searching the archives of the Frederick Law Olmsted National Historic Site in Brookline, Mass. — where Olmsted Brothers was based from 1882 until it closed in 1979 — he learned that the firm logged 34 projects in Vermont, 18 of which resulted in substantial design work.

A map of those 18 sites and information about them appears on a panel that De Vries created as part of "Frederick Law Olmsted: Landscapes for the Public Good," a 23-panel exhibition on Olmsted's national impact for Olmsted 200. VT ASLA, in collaboration with the Vermont Division for Historic Preservation, has installed the complete exhibition at the Guilford rest area on Interstate 91; next it will travel to the Rutland Free Library. Another set of the panels is at the Justin Morrill Homestead in Strafford for the season.

The exhibition touches on everything from Olmsted's childhood in Hartford, Conn., to his years as a New York Times correspondent traveling through the slaveholding South to his 1873 design for the grounds of the U.S. Capitol — at the request of Vermont senator Justin Morrill, though that detail goes unmentioned on the national organization's panel.

"Olmsted was always thinking about creating amenities for society." Rolf Diamant tweet this

Olmsted's first project in the Green Mountains was the University of Vermont's Billings Library, now the student center, designed in 1884. It was followed by Shelburne Farms in 1886 and publishing magnate Henry Holt's Fairholt estate, now the Burlington Country Club, in 1890. The latter were among several private residences the firm designed in Shelburne, Proctor, Norwich and Manchester, though these remain unnamed on the map for reasons of privacy.

Olmsted died in 1903. De Vries noted in an email that, in 1906, his sons received a request from Vermont senator Redfield Proctor to design the state's new tuberculosis sanatorium on 238 acres in Pittsford. (The site is now the Vermont Police Academy.) Design work was completed in 1908.

In 1947, the Olmsted Brothers were still going strong, completing designs for National Carbon in St. Albans. The site became Union Carbide, then the Energizer battery plant; it may soon house the battery factory for Beta Technologies. The brothers also designed National Life Insurance in Montpelier from 1956 to 1960.

De Vries, who has worked at 20 Olmsted sites around the country, including the U.S. Capitol grounds, said it's unclear whether all 18 Vermont projects were built. To confirm that would involve "driving around and seeing if anything remains," he noted. But he has compared Olmsted's drawings for Billings Library with its present-day state and wrote that "The siting of the building ... and the kind of sweeping grades and arced walkway that rise up to where it sits in the landscape are all historic."

State architectural historian Devin Colman has visited the police academy and reported, in a phone call, that "it's hard to tell" today how much of it is Olmsted-designed.

"At Pittsford, the few plans that we do have clearly show view sheds [aka vistas] from the buildings and say, 'Top the trees in this area so that there's a view to this valley,'" Colman said. "But that was 115 years ago, and trees grow. It's now a forest. So it's really hard with historic landscapes."

As for Shelburne Farms, a National Historic Landmark, visitors will be able to tour it in September and see exactly what remains of Olmsted's vision, with the help of De Vries' colleague Patricia O'Donnell. She founded Heritage Landscapes, which focuses on public historic landscapes and has worked on 60 Olmsted sites around the country. That includes 20 years of work at Shelburne Farms, where restoration has involved replanting the historic tree canopy and extending the trail network in accordance with Olmsted's plans.

Shelburne Farms will host a screening of the documentary Olmsted and America's Urban Parks on September 28, and the Burlington-based Architecture + Design Film Series will include the film in its lineup. In October, O'Donnell will moderate a virtual discussion of Olmsted for VT ASLA's annual Doug Crowell Lecture Series; panelists include Dede Petri, National Association for Olmsted Parks president and Olmsted 200 chair.

Historians view Olmsted Brothers projects as on a par with Olmsted's own because the brothers — John Charles and Frederick Law Jr. — were trained by their father and carried on his ethos, style and perspective.

"There's a heavy hand of Olmsted Sr. in all of the later firm's work," De Vries commented. "That's why it's such a legacy in the U.S."

As an example, he cited the outdoor areas for staff at National Life Insurance and Union Carbide. "The little sketches show ladies taking a smoking break and people bringing their lunches," he said.

In the words of Rolf Diamant, "Olmsted was always thinking about creating amenities for society." The author with Ethan Carr of the recently published Olmsted and Yosemite: Civil War, Abolition, and the National Park Idea, Diamant, who lives in Woodstock and Burlington, is a UVM adjunct associate professor and has served as superintendent of five national historic parks, including Marsh-Billings-Rockefeller National Historical Park in Woodstock and Olmsted Park in Brookline. On August 21, he will elucidate the connections between Morrill and Olmsted in a talk at the Justin Morrill Homestead.

Diamant and Carr's book focuses on the 1864 Yosemite Act, with which the federal government made an unprecedented grant of Yosemite Valley to California for public enjoyment. Olmsted was hired a year later to envision Yosemite's design, and he seized the opportunity to write a 7,500-word manifesto on the newly reunified country's need for more public grounds.

In that report, Olmsted "was talking about popular government operating on principles of 'equity and benevolence,'" Diamant said. "He felt that one of the roles of government should be to remove the obstacles that society places in front of people that impair their pursuit of happiness. Even today that resonates."

"From Yosemite's Half Dome to the Capitol Dome: The Intersecting Lives of Frederick Law Olmsted and Justin Morrill," a talk by Rolf Diamant, Sunday, August 21, 4 p.m., at the Justin Morrill Homestead in Strafford. Free. morrillhomestead.org

"Frederick Law Olmsted: Landscapes for the Public Good," through August 31 at the Interstate 91 Guilford rest area; through October 9 at the Justin Morrill Homestead in Strafford; September 26 to October 21 at the Rutland Free Library. Free. vtasla.org, morrillhomestead.org