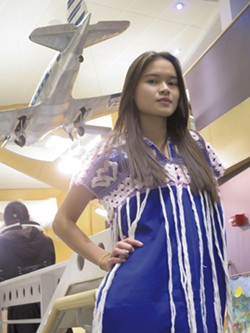 On a chilly Sunday in February, several dozen New American and U.S.-born performers gathered at North End Studios in Burlington to rehearse an upcoming production simply called "the Fashion Show." But no one talked about clothes or makeup. Instead, participants from more than 12 countries proceeded to dance across three stages, guided by tape outlines on the floor. They'd been practicing since January.

Their goal, an hourlong program of dance, music and fashion, will come to fruition this Saturday, March 18, at Burlington International Airport. Seventeen local retailers have donated clothes and jewelry for the event. The performance features 35 cast members executing tight choreography by Heidi Tappan, Lois Trombley, Sarah Cover and Winooski hip-hoppers A2VT. More live music, a poetry reading and displays of traditional clothing from some of the performers' native lands are also on the program.

The Fashion Show isn't just about the latest couture. Organizers said they hoped attendees would come away with a better understanding of their New American neighbors. Also, that the Vermont Refugee Resettlement Program, for which this is a benefit, would leave with a generous check for its community support activities.

Milissa O'Brien, a driving force behind the production, used to organize a similar benefit show for the Boys & Girls Club of Burlington. The last such event was in 2015, she said, because the nonprofit's staff found it too time-consuming.

But O'Brien wasn't ready to let the idea go. She enlisted seven other community members to the cause and pitched VRRP: Let me organize a fashion show and raise some money for you. After receiving approval from its parent organization, the U.S. Committee for Refugees and Immigrants, VRRP's leadership was happy to say yes.

Laurie Stavrand, the organization's community partnership coordinator, admitted that VRRP hadn't staged an event of this scale before. The organizers hope to raise more than $50,000 from ticket sales and donations. O'Brien said the partnership ensured "appropriate ideas, messaging and involvement of [VRRP] clients and community participants."

That was no small task, given that the show's participants collectively speak more than 20 languages and hail from countries with divergent cultures.

"The first rehearsal was pretty awkward," Stavrand wrote in an email, "as people from disparate backgrounds met for the first time and tried to figure out how to relate to one another."

During rehearsals, cast members were split into groups that mixed genders and nationalities. "The group that includes A2VT is a wonderful example of the cultural bridging, which happened organically," Stavrand noted. "[They] were the choreographers for two songs, and the moves they chose were in their distinct African style."

As it turned out, Stavrand elaborated, "The A2VT members are skilled at teaching the nuances of their moves. Now, when they are dancing together, it is like a spirited dialogue, and the conversation continues after practices because they have formed bonds of friendship."

While the moves might have come naturally to some, others had never learned choreography in their lives. Such was the case for Tar Dah. The Burmese Karen woman has participated in four previous VRRP fundraisers, but this is the first time she's had to learn steps.

Tar Dah heard about the show through Stavrand, who counts the 19-year-old and her family as close friends. When asked why she wanted to participate, Tar Dah said, "I want to show more about Karen." That's the name of her language and one of the largest ethnic groups in Myanmar (formerly Burma), whose members have been heavily persecuted. Tar Dah grew up in a refugee camp in Thailand and came to the U.S. in 2009.

To help share her culture with the audience, she'll wear some of her favorite Karen clothing along with selections from area shops. Tar Dah means "younger sister," she revealed. Off-stage, her older sister, Poe Poh, will display a selection of traditional Karen clothing, too.

While most of the runway music is prerecorded, organizers also tapped the local music scene. Daby Touré, a French artist on Charlotte's Cumbancha label, will lend his masterful world-music guitar work. A2VT will close out the show with a performance. Afterward, a DJ from Top Hat Entertainment will keep the dance party going.

The overall goal of the Fashion Show is to raise funds and serve "the needs of new and former refugees and the overall community," said Stavrand. But no less a goal is to have fun.

"It would be fantastic if each of the show's guests leave feeling whole-body fulfilled," O'Brien said, "moved toward the power of promise and good, and away from fear and criticism and prejudice."

The original print version of this article was headlined "Model Behavior: A Fashion Show Mixes Cultures New and Old"