A Bearded Lady Talks About Life Under the Big Top 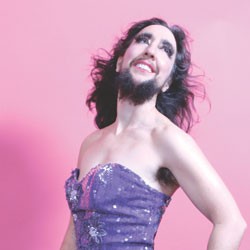 Jennifer Miller admits that her memory can be faulty. She can’t recall the date that Dick D. Zigun first asked her to join the Coney Island Circus Sideshow, or exactly when she began her own troupe, Circus Amok. (It was 1989.)

What she does remember is when the hairs started sprouting — in her early twenties, one or two would crop up on her face each day. Born in 1961, Miller was active in the “second wave” of feminism in the 1970s. The choice not to shave her beard was a way to challenge “our images of what looks right on a woman — of course not shaving legs, not shaving armpits,” she says by phone from New York. “[The beard] seemed to me an extension of that.”

Miller will share the details of her decision, and much more, when she performs “How to Wear a Beard: Politics, Art, Sideshows, Circuses and Life in General” at the Fleming Museum of Art this Friday. Christina Fearon, curator of education and public programs, says Miller is an ideal fit for the Fleming’s current exhibit, “Under the Big Top: The Fine Art of the Circus in America.”

Fearon says Miller is “generous,” both as a performer and a human being. “You would imagine, as a woman with a beard, she would have people who are outright hostile approaching her. She uses the opportunity to turn things around and talk to people about gender identity.”

When Miller’s facial hair began to grow, she was already a circus performer, spending summers juggling with an outdoor show in Hartford, Conn. “I was very invested in that world and the aesthetic of that world,” she says. Today, Miller’s act includes glass and fire eating, knife juggling, and also “talking.” In carny lingo, that means the work of an outdoor barker who draws in audiences, or the lecturer who explains the spectacle once “marks” have assembled inside the tent. “My centerpiece is my bearded-lady number, which involves feminist comedy,” she says.

Currently, Miller earns her living as an associate professor of performance at New York’s Pratt Institute. She says that various circus jobs over the years required her to shave, but in academia her fuzzy visage is all but ignored.

In the summer, Miller’s Circus Amok — described in a Bessie Award citation as “fearless, funky, funny and fundamentally subversive” — hits the streets and parks of New York City with a spectacle that might look familiar to many Vermonters. Acrobats, clowns and other traditional circus acts combine with dancers, life-size puppets and monologues about social justice. Miller did a stint with Vermont’s Bread and Puppet Theater; similarly, many of her current crew, including puppet makers and musical director Jenny Romaine, were once Bread and Puppet company members.

With a group like that already thriving in the Green Mountains, Miller surmises that Vermont might be a welcoming place for the new wave of old-time freak shows such as Austin, Texas-based 999 Eyes. The state, she says, “is open to extreme performance.”

In her Burlington appearance, Miller says she’ll discuss the deeper meanings of such entertainments. In sharing the history of the freak show, she’ll tell her own story and share “what it’s like to be a woman with a beard and the choice to grow the beard, the sideshow meaning of ‘freak,’ and the history of putting people on display for profit.”

Beyond that, Miller is reluctant to reveal exactly what to expect when she comes to the Fleming. Like a true showperson — or a barker — she’ll only hint at what’s to come. “I can tell you,” she says. “But you can come and see it to believe it.”

“How to Wear a Beard: Politics, Art, Sideshows, Circuses and Life in General” with Jennifer Miller. February 25, 6 p.m., Fleming Museum of Art, University of Vermont, Burlington. Free with admission of $5, $3 for students/seniors.