A 36-Year Retrospective of Bread and Puppet Theater Calendars 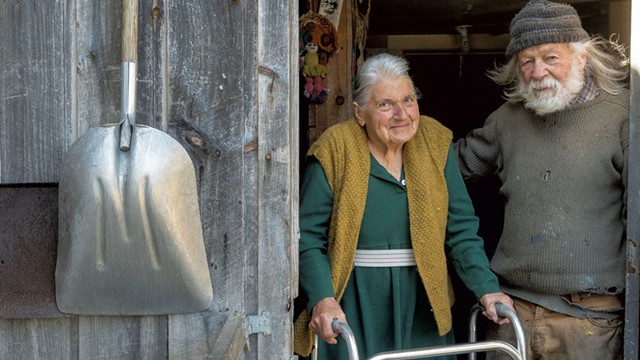 Thirty-six years ago, Peter and Elka Schumann started making calendars. The collaboration merges the artwork of Peter, founder of Bread and Puppet Theater, and the editorial direction of Elka, his longtime partner in marriage and art.

Each calendar has a theme that the two discuss and arrive at together. This is not standard-issue calendar fare but farther-reaching and original, with subjects such as Resistance, Basic Needs, Russian Proverbs, 12 Reasons to Visit Grandma, and Bread and Puppet Museum.

Next, Elka plays a particularly crucial role "by bugging her husband to make the pictures in time, whether woodcuts or drawings," Peter said. "And to criticize those things; to reject some and admit others into the calendar. And so forth. That's how it goes."

The scope of that work — which literally marks the passage of time — can be seen in a retrospective at the Hardwick Inn, "1,111 Copper Nails: Bread and Puppet Calendar Prints – A 36-Year Retrospective." The name refers to the number of nails it took to mount the exhibit. An annex show, with four years of calendars and prints for sale, is on display at Hardwick's Front Seat Coffee, down the street from the main exhibition. Curator Alexis Smith called this collection the exhibit's "launching pad."

Displayed in a mazelike exhibit hung throughout the sprawling, three-story Hardwick Inn, "1,111 Copper Nails" contains every page of each Bread and Puppet calendar, as well as every year's full calendar in bound form. Viewing the full exhibit can take more than one pass through the building; prints hang in nooks and crannies, doorways and narrow hallways that dead-end at an office in the multiuse space.

Peter said that when he and Elka went to the exhibit, which is dedicated to her, it felt like they were participating in a "sports event."

"For us, it was like climbing Mount Everest," Peter, 86, said. "For Elka, to walk up the stairs, to get around corners, to peek around one stairwell that we can't do and go into another niche, it was a really lovely sports event."

Elka, 85, uses a wheelchair and a walker. She said she's had bad falls and a stroke, and she isn't very mobile.

"Elka's really aware of the fact that you can't only put skeletons and naked ladies on a wall in a family calendar." Peter Schumann tweet this

The Schumanns, who worked on the calendars with print shop manager Lila Winstead, created their first calendar in 1986. The idea came from a similar project on the Lower East Side of New York, where Peter founded Bread and Puppet in 1963.

The Schumanns had two close friends, described by Peter as "powerhouse" women, whose kids played with their kids. The women worked at Henry Street Settlement, a social service agency, and made woodcut calendars with kids who attended programs there.

"That was so beautiful, we never forgot," Peter said. "We remembered, and we wanted to make that also."

The resulting calendars on view feature images both simple (bread, broom, garden) and more complex (puppet parade, happiness, the "limited timespan" of a grandmother's life). Elka paired each artwork with a calendar month.

"Elka's really aware of the fact that you can't only put skeletons and naked ladies on a wall in a family calendar," Peter said. 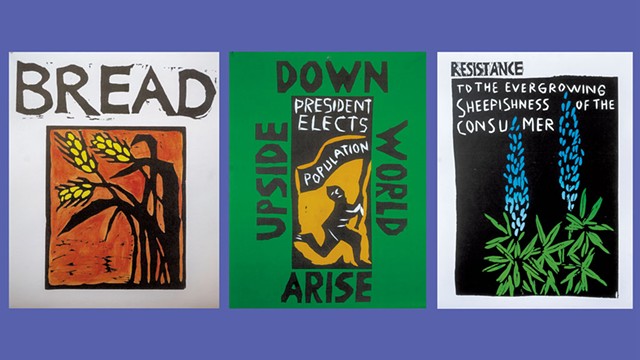 The theme of the inaugural calendar is the washerwoman, a well-known figure and character in the puppet theater and related art. She is, Smith said, "an iconic image, the Russian peasant-style woman, in the likeness of Elka."

Smith, who has curated Peter's work for more than 25 years, conceived of the calendar exhibit. In the process of putting it together, a digital archive was made of all of the images in the calendars.

"I thought that having a picture of the grand arc of the work that Elka had done in her lifetime on the calendar would be a really important overview of her life's work," Smith said. An anonymous donor contributed $3,000 to pay for printing and production costs, she noted.

It took Smith a couple of years to create this exhibition. The effort involved uncovering old calendars in various places at Bread and Puppet's home base in Glover and searching for a suitable place to mount the show.

"It was my gift to [the Schumanns]," Smith said. "I searched far and wide for somebody that could help me with the project."

The gift was well received; the Schumanns expressed their appreciation of Smith's work and the presentation.

"The hanging of the calendar pages is all Alexis Smith," Elka said. "It was lovely and so nice to see all the calendars."

Smith said she "bought out every copper nail in every hardware store that I could get to" to hang the exhibit.

"I just thought it was beautiful with these paintings, and simple," she added. "It was me and my hammer and volunteers. Bread and Puppet does not function without volunteers."

The calendar exhibit is part of a broader initiative to show more of Peter's art in Vermont. Another show recently opened at Rabble-Rouser Chocolate & Craft in Montpelier titled "The In and Out Show — Off We Go — Riding Through 'the All' With Bed Sheet Mitigations." The paintings are on view inside and outside the Main Street chocolate shop and café.

"Peter's been producing a tremendous amount of work," Smith said. "He wanted all the exhibits to be in the state of Vermont and drivable for him and Elka to participate in them. He wanted Vermonters to see what he was doing."

When Peter himself saw the years of calendar art, he was reminded of "what we have found already, surprisingly already, how old we are," he said. "It surprises us even more. My God, how did that thing come together?"

The original print version of this article was headlined "Timeless Art"