7 Upgrades Worth Waiting For at Burlington International Airport

It’s hard to miss the construction under way at Burlington International Airport, known by its three-letter airport code, BTV. The first thing drivers see as they approach the entrance is a partly finished building behind a temporary chain-link fence.

Things are in flux inside, as well. The upstairs security checkpoint is sometimes closed, so regardless of their gate, all departing ticket holders may have to pass through the two-lane Transportation Security Administration screening station around the corner from the ticket counters.

That wasn’t a problem when the number of passengers plummeted early in the pandemic, but these days “our numbers are skyrocketing,” said BTV’s acting director of aviation, Nicolas Longo. The good news: Many people are eager to fly into and out of Burlington. The bad news: Clearing security may take a while.

Longo gets text alerts on his phone every time the TSA queue exceeds 15 minutes. It happens frequently, especially between 5 and 6 a.m., when hundreds of passengers for multiple flights converge on the checkpoint. He’s seen wait times creep as high as 45 minutes or more.

As a result, BTV has been warning passengers to arrive two hours early. The ground-level checkpoint opens at 4 a.m. “If you don’t get there two hours early, you might not make your flight,” Longo cautioned.

Fortunately, that should change this fall.
The new wing under construction is part of a massive, $19 million Terminal Integration Project (TIP), funded by a grant from the Federal Aviation Administration, which Sen. Patrick Leahy (D-Vt.) and his team were instrumental in helping secure. The TIP will connect BTV’s two terminals and include a new five-lane security checkpoint. When that opens, wait times should drop dramatically.

That’s one of many upgrades coming soon to BTV, which celebrated its 100th anniversary in 2020. The current facility was built to accommodate propeller planes that carried 30 to 50 passengers. Today it serves jets that seat 200. That, said Longo, is the root of its current challenges.

The airport's evolution also demonstrates an increase in demand for its services. Burlington Mayor Miro Weinberger calls BTV "a great asset" to the city, and the entire state. “The City of Burlington built BTV about 100 years ago, and I am proud of where we are today," he said. "Roughly 700,000 passengers take off from BTV each year. They can choose one of six airlines to fly nonstop to 16 cities. This is just the beginning. We are going to continue this outstanding growth.”

Curious about the next stage in BTV’s development? Here’s a sneak peek behind the scenes, courtesy of Longo, who often tours community leaders, school groups and others through the facility.

A self-described “aviation nerd,” Longo got his pilot’s license at age 17 and earned a bachelor’s degree in aviation and airport management, followed by a three-year stint as an air traffic controller in the New York City area. He’s been working at BTV for almost 10 years, most recently overseeing operations before taking over as acting director last summer. He’s a knowledgeable and enthusiastic tour guide with a deep understanding of the airport’s history — and a vision for its future.

Here are seven things he’s excited about, from aesthetic improvements to investments in renewable energy.

BTV’s new security station will have five lanes and new, top-of-the-line equipment that will help TSA staff screen passengers safely and efficiently. It’ll be faster and will allow all passengers to easily access all of the gates — and all of the amenities.

Visitors who don a hard hat and accompany Longo into the new space behind that wall will see that it’s currently full of construction equipment, scissor lifts and scaffolding. But some of the elements, like the LED directional lights, are already in place.

Longo, surveying the future security station, noted that “This is the most stressful part of traveling, right here.” That’s why the carpet, color and lighting choices are designed to have a calming effect, he said. The design also includes space to install automated bin carriers, already in use in some larger airports. They won’t be part of the initial project, but there’s room to add them later. 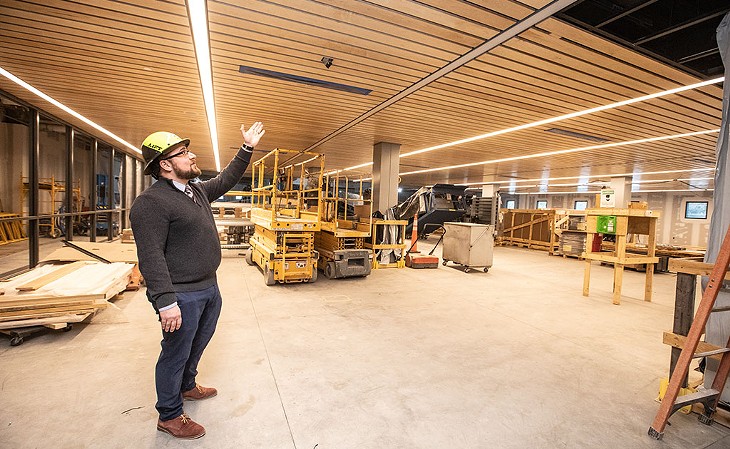 Another plus: The new design includes a space after the security checkpoint where travelers can park themselves for a few minutes before heading to a gate. “You can fill up your water bottle, put your belt back on, put your shoes back on,” Longo said.

He appreciates having space to do that when he’s traveling with his wife and their three young kids. “Traveling as a family of five, you just need a minute to recompose,” Longo said.

The rooftop of the new wing will host a solar array to increase the amount of energy generated on-site. The airport currently benefits from a few solar arrays. In 2017, the one on the roof of the parking garage generated 11 percent of the airport’s total electricity needs.

As construction continues, the BTV team will also be working with the Burlington Electric Department to make improvements to interior energy use that will increase efficiency.

Longo noted that BTV will be receiving an additional $4 million a year in federal funding through the recently approved infrastructure bill; the BTV team plans to earmark at least $250,000 of that annually for sustainability efforts.

Donny Goris-Kolb, senior environmental planner with engineering firm VHB, which has worked with the airport in the past, explained in a phone interview that BTV is about to embark on a greenhouse gas emissions inventory that will take its focus on sustainability to “a deeper level.”

There’s not much the airport can do about greenhouse gas emissions from aircraft — they’re owned by the airlines — but it can control its own facilities, its fleet of vehicles and the infrastructure that will allow planes to plug in to its power supply to charge batteries on the ground. Right now, said Goris-Kolb, “There’s federal money available for these types of technologies. The airport is really trying to take advantage of that.”

On Longo’s list: investigating geothermal heating and cooling, erecting a new energy-efficient maintenance building, and ensuring that the airport’s fuel tanks can store the cleanest and most efficient types of aviation fuel. 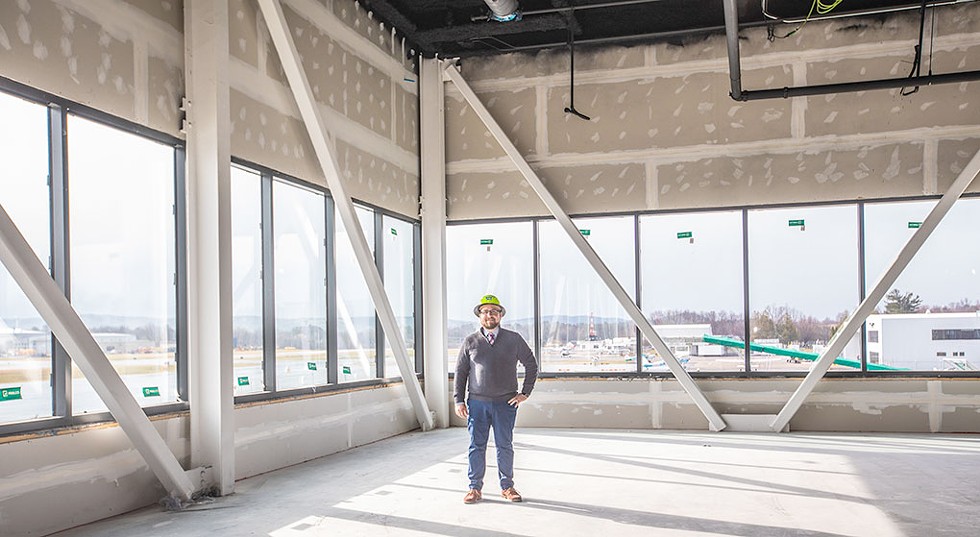 In the not-so-distant future, after passengers clear security, those who are flying American, Frontier, Sun Country or United will head upstairs via a new staircase, escalator or elevator. They’ll ascend into a spacious new room with a 13-foot ceiling and large windows lining the walls to take in panoramic views of Mount Mansfield and Camel’s Hump.

“Just standing in this corner will be truly breathtaking,” Longo said, indicating where two windowed walls intersect. When he contemplates the view of mountains and rolling hills with airport operations in the foreground, “I’m just in heaven,” he said.

The new windows will also offer a bird’s-eye view of a former maintenance building that now houses Beta Technologies’ airport HQ. BTV passengers will be able to glimpse Beta employees as they race to develop battery-powered planes; the company’s recharging station prototype is visible on the tarmac.
Longo also wants to point out something visitors can’t see: the endless hours of effort by BTV’s partners and airport staff over the last two years, which kept the airport functioning through one of the most challenging times in the industry. None of these grand improvements would be possible without them. 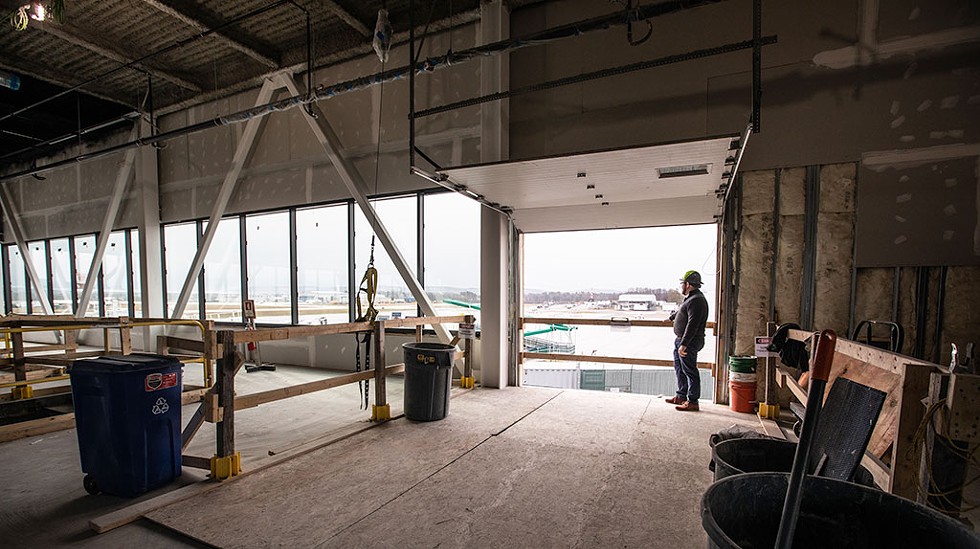 It’s not part of the TIP, but the airport has also recently received FAA funding to add a gate and second-floor jet bridge to the new wing. Why? Because two of the airport’s nine jet bridges are essentially unusable. They’re too short and low to the ground to reach the current generation of jets. This means that passengers flying out of the ground-level terminal now traverse several shipping containers lined end to end, then exit and climb an open-air metal staircase to reach their plane. “On a January morning, that’s not what people want to do,” Longo quipped.

The new gate is scheduled to open shortly after the TIP construction ends. Eventually, Longo hopes to move all of the airport gates upstairs and use the ground level for equipment storage.

#5: More space to spread out 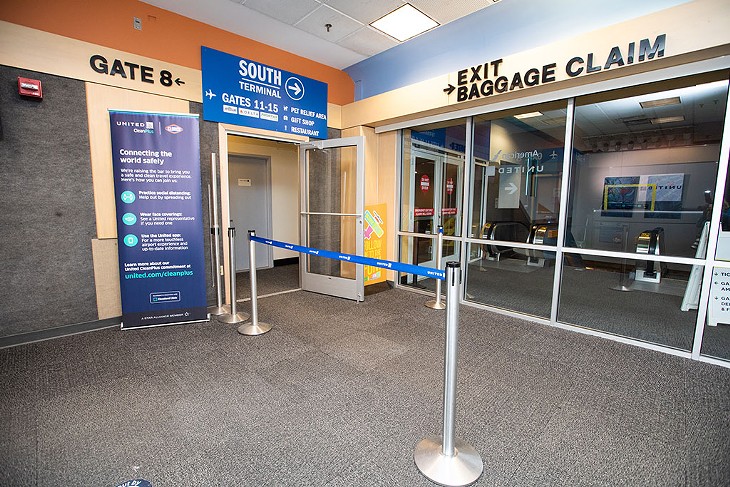 The current seating area outside BTV’s busiest gate, No. 8, was not designed for social distancing. The rows of chairs are clustered close together; even when passengers sit with a few seats between each other, it still feels cramped. “It’s crowded,” Longo admitted. “It’s very, very crowded.”

Once the new space opens, the second-floor wing will help spread passengers out. So will renovations to the current second-floor gate area. They’re part of the TIP, too.

The new design eliminates the escalators leading up to the old security checkpoint and takes out the security station, too. That’ll open things up considerably, Longo said.

Expanded restrooms are also in the works. The ones in the busy second-floor gate area have just five stalls each — not enough for an area used by several hundred passengers an hour. 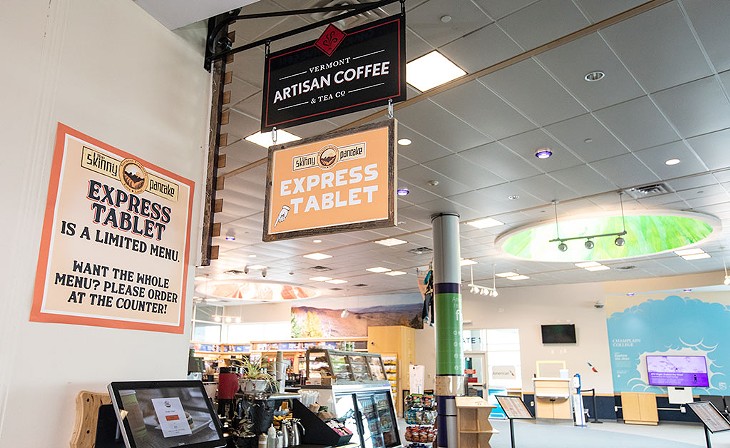 The TIP renovations also include expanded footprints for the Hudson News stores and for the Skinny Pancake. Longo envisions space for another restaurant someday, too.

He’s hoping to increase capacity and sales. Though the airport is owned by the City of Burlington, its operations aren’t funded by taxpayers. Its revenue comes from ticket surcharges, tenants such as Beta and Heritage Aviation, and a portion of vendor sales.

The more money the airport generates, the more it can spend courting airlines to bring in flights to more destinations. So when Longo sees people look at a long line at the Skinny Pancake and decide to keep walking, “it motivates me to get more selection and keep our community and travelers engaged,” he said.

The TIP renovation will also create more space for showcasing local artists. Burlington City Arts will manage it. In addition, Longo is working with the Fletcher Free Library on expanding a library nook to include ebook rentals. The new upstairs floor plan will highlight the Abenaki Heritage Museum on the airport’s mezzanine level.

Longo wants to extend the airport’s design elements — the muted colors and the rustic wooden décor of the Skinny Pancake — throughout the airport, in new sections and old, to make walking from one end to the other a more seamless experience.

For many visitors, BTV is their gateway to Vermont. It offers a connection to all the state has to offer, from ski resorts to hikes to local businesses and breweries.

“We want to make sure we tell that story really well,” he said, “and this building is going to do that.”

BTV by the Numbers

The amount of the FAA grant that’s funding the airport’s Terminal Integration Project.

Roughly the number of departing passengers BTV serves each year.

The size of the staff running airport operations. They do everything from clearing snow at 1 a.m. to changing electrical systems on the runway to security procedures to inspecting the runways.

The number of people employed by airport tenants and vendors such as the TSA, Beta and Heritage Aviation.

The carriers that fly out of BTV:
Delta, American, United, Frontier, Sun Country and JetBlue.

This advertisement was commissioned and paid for by Burlington International Airport.