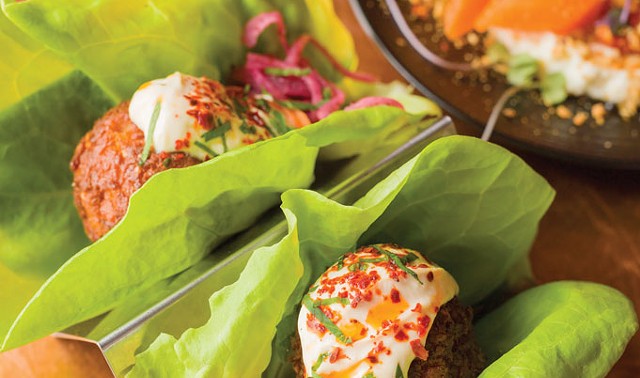 Vermont is known for its natural beauty: The state's rolling agricultural landscape, historic villages and rugged mountain backbone are all postcard-perfect.

But living here isn't for sissies. Even in the summer, there's wood to split — and that bountiful backyard garden isn't going to weed itself. To thrive in the Green Mountains requires hard work, a can-do attitude and, often, a little help from one's neighbors.

For proof, just look to our restaurants. The best ones put the "labor" in "labor of love." Many of the state's top chefs ditched award-winning city kitchens to craft beautiful food right here with local ingredients — some of the world's finest and freshest. They did so not because it's easy; it isn't. But with great effort comes great rewards.

In Burlington, Cara Chigazola Tobin and Allison Gibson sacrificed secure, well-paying jobs at lauded restaurants to launch their own, Honey Road, in 2017. In their first year, they earned two James Beard Award nominations for their exquisite Middle Eastern fare and service.

Near Okemo Mountain, Downtown Grocery owners Rogan and Abby Lechthaler took a risk when they replaced a long-standing Italian joint with Mama's Hand Made Italian in 2017. Now, wintertime skiers crowd in for hand-turned bucatini and braised lamb — and the local community bolsters business during the off-season.

In tiny Bethel, Owen Daniel-McCarter and Jesse Plotsky gave up busy lives in the Windy City to serve up music, movie nights and Chicago-style hot dogs at Babes Bar. Even they couldn't have predicted that the watering hole would become a second home to old-timers, yuppies and drag queens.

And in rural Fairlee, few would have guessed that the town's aging demographic would embrace Samurai Soul Food, a quirky locale for cheap beer and a modern take on General Tso's chicken. But the place fills up nightly, thanks to chef-owner Kelden Smith's Yankee ingenuity in figuring out exactly what his community needed.

These are just a handful of the restaurants featured in this year's 7 Nights dining guide. Wherever these pages lead you, look forward to a taste of Vermont's not-so-secret ingredient: love of place.