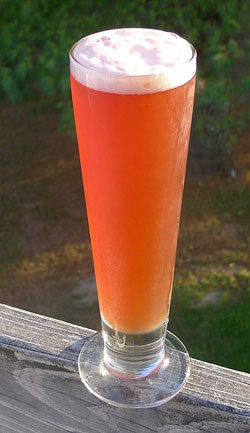 “I’ll have a shot of genever.” Say what?

Until recently, the only place you might have heard such a request was in Belgium or the Netherlands. There, the botanical-infused malted genever — also known as peket, or Dutch gin — boasts 500 years of history. It’s a precursor to the anglicized version of gin we drink today. Once upon a time, the colonies imported more genever than gin, and most of the cocktails that call for the juniper-infused spirit were originally built around moodier genever.

“Last weekend, I went to a market in Waterbury and found the [old] bottles of genever that used to be imported,” says Véronique Beittel, a Richmond-based Belgian who began bringing the spirit into Vermont this year. “They had oval-shaped green glass, and the label was a heart.”

Beittel is puzzled that the vaguely sweet, clear, herbaceous drink is rare in bars here; its roots as a medicinal, as well as its versatility, she opines, should make it a candidate for cocktail stardom. Anyone who meets the tall, raven-haired Beittel, 30, at one of her genever tastings at area retailers will experience her infectious enthusiasm for her national drink. She spent many hours compiling a seven-page history of genever, along with recipes for more than a dozen ways to quaff it — from genever piña coladas to modern versions of Kir Royale and sangria.

Genever first showed its face more than five centuries ago as a medicinal malted-grain mash in which juniper berries were distilled for flavor. When British soldiers witnessed Dutch combatants sipping it during Renaissance battles, they began calling the stuff “Dutch courage” and replicated the drink at home, albeit with pure alcohol.

The relative ease of making gin eventually trumped genever’s popularity in parts of Europe and the United States, especially during Prohibition. In Belgium, genever production almost ceased during World War II when troops stripped the precious copper from the country’s distilleries.

Beittel first tried genever as a teenager with her family while attending a Christmas market in Bruges. “It is normal to drink when you are young with the family” in Belgium, she says. Traditionally, genever is served in a frosty shot glass, and the first sip is taken handless, while one bends over the table or bar. “My grandma would drink one shot of [genever] every day,” Beittel confides.

After a long decline since the 19th century, genever is seeing a slow revival in Belgium, and genever bars proliferate there despite the drink’s somewhat fusty reputation. “When your grandma drinks something every day, it’s not very cool,” suggests Beittel with a laugh.

Beittel moved to the United States after college; while living near Washington, D.C., she realized the only way she would be able to drink genever was to bring it herself. She began the byzantine process of becoming an importer and partnered with De Moor Distillery, a hundred-year-old company in Aalst, Belgium, because of its dedication to unadulterated ingredients and small batches.

At De Moor, each batch of genever is distilled in copper stills and infused with a combination of juniper, orange peel, blessed thistle, carob, nutmeg, pepper, angelica, cardamom and cinnamon — the nine botanicals that give her Diep 9 Genever its name. Genever comes two ways — as oude, or traditional, a sweet, heavily malted, barrel-fermented style whose flavor is reminiscent of whisky; and jonge, a drier, more modern style with the neutrality of vodka, often flavored with cream and fruit juices.

While a potpourri of herbs and spices go into De Moor’s genever, they have a subtle presence in the six flavors that Bittel imports: passionfruit, peach and apricot, red currant, vanilla and chocolate, the last made with Belgian Callebaut chocolate. While all the flavors are smooth and cheerful, the passionfruit and chocolate have proven best sellers so far, says Beittel. At 20 percent alcohol, genever is gentler, and less buzz-inducing, than high-proof liquor. “But it will sneak up on you!” she warns.

Two years ago, on a ski trip to Vermont, Beittel and her husband “lost our hearts” to the place and relocated here. Diep 9 Genever became the first, and only, genever imported within Vermont’s borders. This fall, she’ll start importing an unflavored, jonge-style genever, as well as a two-year-old barrel-aged (“oude”) version near the holidays. I look forward to trying genever in all its malty, unfettered glory.

In the meantime, Beittel’s recipe for a piña colada made with the milky vanilla genever is simple and summery. So, too, is the “Passionista,” a blend of passionfruit genever and Champagne with a splash of orange juice.

For me, playing around with a bottle of red currant genever — and craving a beer cocktail on a hot evening — led to pairing genever with the very local #9, the pale ale from Magic Hat Brewing Company. The sweet genever is a bright foil for the slightly bitter ale; I filled a glass with one part red currant genever and three parts #9 and immediately felt like shucking all responsibility. For an extra dose of sweetness and spice, you can top this with a splash of ginger beer. It may not really be medicinal for the body, but it’s good for the soul.

Diep 9 Genever, $20.99 for the month of August at Vermont liquor stores. Find recipes at diep9genever.com.