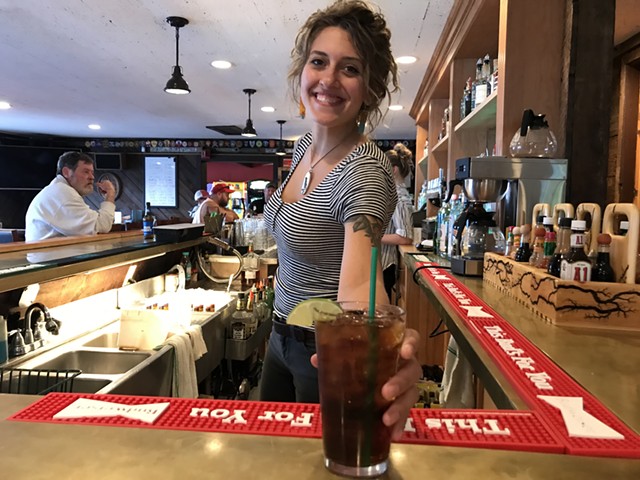 For the first installment of 251, an online series of dispatches from Vermont towns, I followed the stars. That is, I went to Montgomery, the hometown of soon-to-be Olympian Elle Purrier St. Pierre.

A star runner at Richford High School and the University of New Hampshire, Purrier St. Pierre qualified for the Olympics on Monday, when she won the 1,500-meter race at the track-and-field trials in Eugene, Ore. A 26-year-old speedster who grew up on a dairy farm in Montgomery Center, Purrier St. Pierre set personal and meet records to win in 3:58.03. She triumphed in high heat, even  after getting shoved off the track at the start of the race.

With this awe-inspiring achievement in mind, I drove to Montgomery on Wednesday. The Franklin County town welcomes visitors with a sign on Route 118: "Smile, You’re in Montgomery." Walking around the village and over two covered bridges, I came across a person who happened to be Purrier St. Pierre’s middle school basketball coach. (Back then she was Elle Purrier; St. Pierre is her married name.)

John Newton was playing hide-and-seek with his pug, George, when I ran into him.

“We would do sprints and she blew everybody away,” Newton told me. He remembered telling Purrier St. Pierre’s mother that her daughter was going to be a better runner than a basketball player. “But I never dreamed she would be that good,” Newton added.

It was a lucky surprise to bump into a former coach of Purrier St. Pierre’s, but the main purpose of my trip was to drink a Captain and Coke at the Snow Shoe Lodge & Pub in Montgomery Center. It’s Purrier St. Pierre’s local bar, and I’d read in the New York Times that’s her drink.

Bartenders Nikki Woods and Angela Wendt are northern Vermonters close in age to Purrier St. Pierre. Woods greeted me at the bar and took my order. I watched her pour a long, steady flow of rum into a 16-ounce glass before she squirted in a little Coke.

“Elle’s the child of a dairy farmer,” said Woods, 24, who grew up on a farm in Enosburg. “She already had all that muscle to begin with.”

Wendt, 25, is from “the other side of the mountain.” But she found a home in Montgomery, on the west side of Jay Peak, five years ago.

“This town is like a little patchwork quilt,” Wendt said. “A little nook where people can come and relax and be themselves.”

The early crowd at the Snow Shoe is a beer-and-whiskey bunch, big on baseball caps with sunglasses perched on the visor. A few people were talking about Purrier St. Pierre’s win, and the colorful language she used in a post-race interview to express her excitement.

“What do you expect from a farmer?” Brent Godin said. “God dang it!” (Godin said that, when he ran, he vomited.)

Marty Cota, 57,  was drinking a Coors light at the bar. He told me his best time in the mile — running in formation 35 years ago in the Air Force — was more than eight minutes. That’s more than twice the time of Purrier St. Pierre’s personal best at the trials.

“If she wasn’t running, she was running the hay truck up and down the hill,” Cota said. “She works hard all the time.”

Cota predicts she’ll “kill it” at the Olympic Games in Tokyo. He said her achievement is important for local kids.