251: Civil War Memorabilia and a Jump in the Lake in Alburgh | 251 | Seven Days | Vermont's Independent Voice

251: Civil War Memorabilia and a Jump in the Lake in Alburgh 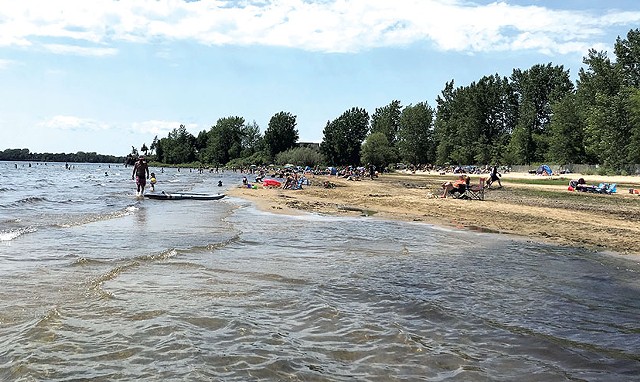 Last month, Seven Days launched the online series "251." Named for the number of towns and cities in Vermont, it aims to highlight interesting, entertaining or worthwhile stories reporters seek out in each place. If we visit one locale per week, we'll cover them all in about five years. But who's counting?

In the first installment, we visited Montgomery, the hometown of soon-to-be Olympian Elle Purrier St. Pierre. The 26-year-old runner qualified for the Olympics in late June when she won the 1,500-meter race at the U.S. track-and-field trials in Eugene, Ore.

The second dispatch explored the Free Little Art Gallery in Middlebury. The make-it, take-it gallery, much like a free little library, held drawings, paintings and a ceramic vessel the day we visited.

251: A Mini Art Gallery in Middlebury
By Sally Pollak
251

This week we introduce the "251" series to print readers with the third installment — a trip to Alburgh in the northwest corner of Grand Isle County at the Canadian border. A reporter can only hope that every town in Vermont yields the kind of surprise and delight we stumbled upon there.

At souvenir and gift shop New England Via Vermont, a handwritten sign on the front door presents a marketing twist. Straying from the standard practice of announcing what's available within, the sign lists items that the store doesn't sell: "cigarettes, beer, wine, liqueur, gold or diamond jewelry, drugs or medicine, guns or ammunition."

But the lack of certain sundries should not deter entry. Inside the Milk Street store, which occupies a former creamery, is an array of objects that's unlikely to appear in other local gift shops.

There's the usual and the semi-usual: sweatshirts, puzzles, baseball caps, greeting cards and raspberries. There's also the less usual, in a space dubbed the curiosity room: fossils, minerals, shells and a robe of buffalo hide — objects that are on display but not for sale. Finally, there's the flat-out unusual: a treasure trove of items in a back room, where proprietor Margaret Theoret has amassed a collection of Civil War memorabilia. She calls the exhibit the Soldiers and Citizens Civil War Museum and founded it a decade ago. Admission is by donation; the money is donated to Civil War preservation and education groups. 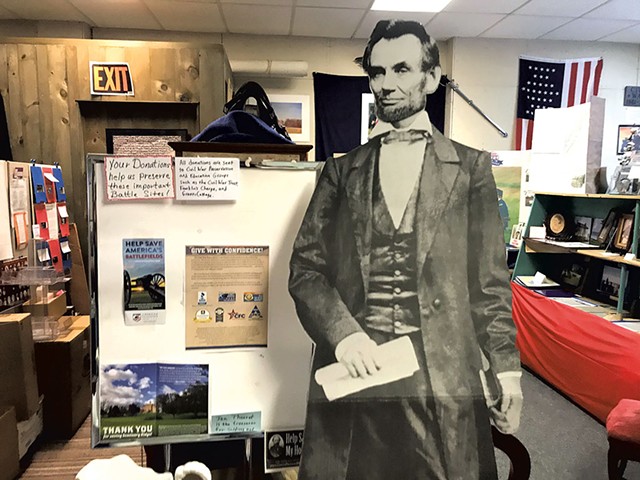 A cardboard cutout of Abraham Lincoln, tall and lanky like the 16th president, greets visitors by the entrance. Copies of letters penned from the battlefield and written histories of battles — including the St. Albans Raid — are on display. Muskets, teapots, penknives and playing cards, along with other everyday items of a soldier's life, fill display cases.

Theoret, 78, lived in Alburgh as a young child and returned as an adult with her family to settle in the border town. Over many years, she transformed her onetime tack-and-bridle shop into its current incarnation.

She designed her business for tourists, including people who enter Vermont from Canada. 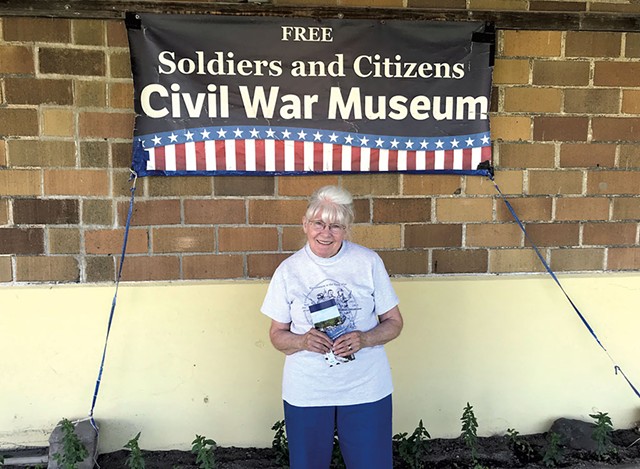 "I wish they would open the border," Theoret said on July 5, when Main Street in Alburgh was bedecked with U.S. flags for its Independence Day celebration. "It's very important to every business here that we have the border open."

Another local attraction, Alburgh Dunes State Park, was a "madhouse" over the holiday weekend, according to a young man working at the park's entrance booth. It took this reporter about 30 minutes to enter midday on July 5 behind a long line of cars.

Yet even with the holiday crowds, it wasn't hard to find space on the long sandy beach, where groups of families and friends picnicked, played catch, made sandcastles, turned up the music and swam, swam, swam.

The air is fresh on the islands, and the water irresistible. Dunes that mark the eastern edge of the beach form a border for a perfect summer walk, interrupted only for a detour southwest into Lake Champlain.

The original print version of this article was headlined "251: Dispatches From Vermont Towns | Civil War memorabilia and a jump in the lake in Alburgh"