Troy Headrick likes to have serious fun with his facial hair, and it shows. On September 11, he won a blue ribbon and trophy at the 2021 National Beard and Moustache Championships, presented by Pennsylvania beard care company Honest Amish, and was a contender for Best in Show. Headrick described the annual event, which uses the British spelling, "moustache," as a gathering of "people who are probably a little too excited about facial hair."

Headrick, who's lived in Vermont since 1996, met this reporter recently at the University of Vermont, where he is assistant director for community standards at the Center for Student Conduct. It wasn't difficult to find him amid the handful of other hirsute men crisscrossing the university green that day. Tall, lean and stylishly dressed, 54-year-old Headrick sported a shaved head, skinny jeans, hipster work boots, blue-tinted glasses, and, most importantly, an impressively waxed and swooping mustache, the kind that was signature to artist Salvador Dalí. Wearing my own close-cropped, salt-and-pepper goatee, I felt like a gangly mutt alongside a Westminster Kennel Club Dog Show champion.

"I've always messed around with my look and been a bit of a nonconformist." Troy Headrick tweet this

But Headrick's ego was as pencil thin as the whiskers on his upper lip, and he was more than happy to engage in some friendly 'stache talk.

"I've always messed around with my look and been a bit of a nonconformist," Headrick said. Growing up in Manitowoc, Wis., a town made famous by the Netflix TV series "Making a Murderer," Headrick and his three brothers often engaged in random competitions with each other, such as seeing who could toss a grape the highest into the air and catch it in their mouth. His younger brother, Josh, is an accomplished whistler who's competed at the national level.

Headrick's first foray into serious facial frizz came in 2005, when he decided to grow a handlebar mustache and "rock it for as long as I could." He spent a year growing a 10-inch-wide mustache before shaving it off. Then, in 2012, Headrick set out to grow the heftiest beard he could; he let it grow without any trimming for more than two years.

His timing was serendipitous. Just months after the Boston Red Sox won the 2013 World Series while sporting the furriest faces in professional baseball, Headrick ran the Boston Marathon in his own bushy beard and a Red Sox cap. That year, he said, "The crowd support was amazing."

Stuck in Vermont: Troy Headrick Sculpts a Giant Slingshot for His Burlington Backyard
Episode 648
Troy Headrick turned a dead tree trunk from the woods into a giant slingshot. He and his partner, Marianne DiMascio, shoot a variety of items — including water balloons and apples — into a ravine behind their house in Burlington. Eva Sollberger visited and got to launch a few projectiles, too.
By Eva Sollberger
Stuck in Vermont

Despite Vermonters' follicular fondness, the Green Mountain State lacks the beard clubs and competitive facial hair circuits common in some other places. Still, Headrick has won a few Burlington beard competitions over the years, including one at the former Das Bierhaus and another at ArtsRiot.

An avid runner, Headrick soon tired of the heat and heft of his massive beard and shaved it off. But, as he often does during the beard-trimming process, he experimented with several other whiskered miens, including the Dalí style popularized by the eccentric Spanish surrealist. Discovering that this style of 'stache didn't feel nearly as heavy on his lip or collect as much sweat, Headrick decided to run with it, literally.

Fast-forward to this month, when Headrick and his wife attended the National Beard and Moustache Championships, held this year in Scranton, Pa. The annual event, which began in 2010 and is open to anyone regardless of prior competitive involvement, drew 162 participants from as far away as Florida and Alaska. It featured more than 50 divisions, including a "craft" division for people who are unable to grow facial hair and use artificial alternatives. The mustache category alone encompassed seven different classes, such as the styled handlebar, the English, the freestyle and the "uber-stache."

As a newcomer to the event, Headrick characterized its subculture as an eclectic mix of ironic hipsters, gentlemen from the "gay-bear faction," and bikers "who were loud and kind of in your face." Headrick said he encountered a handful of bearded bros with "a savior mentality," whose attitude seemed to suggest, "I'm doing really important work with my beard." The event raised nearly $12,000 for several local charities, including the Scranton-based Women's Resource Center, which works to end sexual and domestic violence. 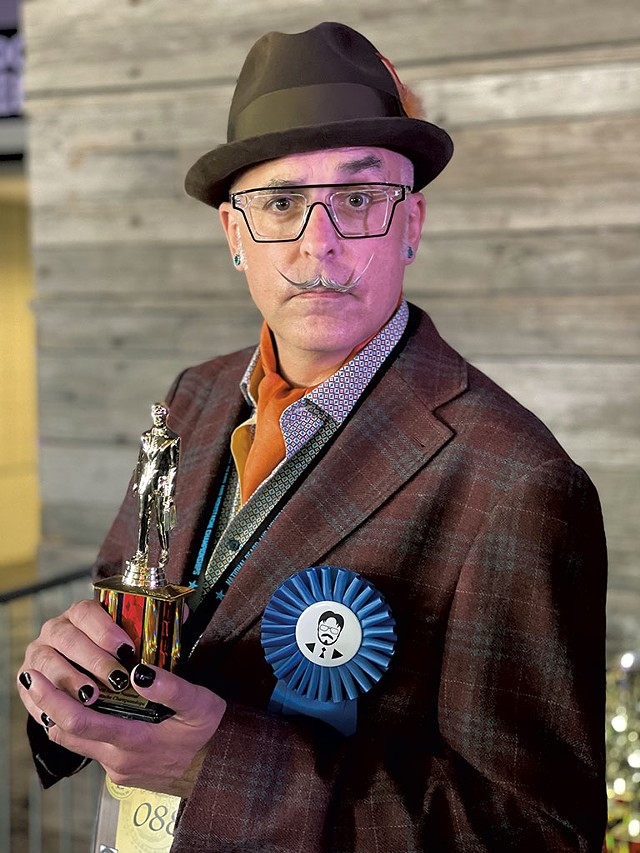 For the most part, however, Headrick found his fellow competitors a friendly and fun-loving bunch, especially the mustachioed men, who, like Headrick himself, didn't seem to take themselves too seriously.

Going in, Headrick wasn't sure whether the judges would prefer uniqueness and creativity or, like a dog show, adherence to an idealized standard, such as uniform hair length, texture and sheen.

So Headrick studied photos of past Dalí mustache winners, as well as historic images of Dalí himself. According to the competition's rules and guidelines, the Dalí should be "slender with the tips curled upward. Hairs growing from beyond the corner of the mouth must be shaved. The tips may not extend above the level of the eyebrows." Styling aids, such as wax or hairspray, are permitted.

But Headrick noticed that most previous winners didn't have thin mustaches like his but full ones.

"For me, that's not how Dalí wore his mustache," he declared. "I said, 'If I'm going to do this, I'm going to pay homage to the man who it's named after.'"

Though whiskers are the main focus of the event, overall presentation, including outfit, attitude and style, are also important. Since Dalí was such a flamboyant man, Headrick said, he dressed as he imagined the artist might have were he alive today: in a red plaid jacket, rust-colored pants and ascot, and a fedora.

When Headrick's name was called, he walked onstage past the seven judges, as instructed, and then returned to the bleachers where the other competitors sat. One by one, each competitor was called back for interviews and closer examinations.

During his turn, Headrick said, he was immediately encouraged when he heard "oohs" and "aahs" from the judges. One remarked that Headrick had shaved between his nose and lip, then asked how he did it. (He regularly uses a straight razor.) When the next judge started giving him positive feedback, Headrick said, "The other guy calls me back and goes, 'Do you walk around like that all the time?' I do. I'm into this!"

Clearly, the judges were impressed by Headrick's commitment to the Dalí demeanor. He scored a 49.9 out of 50.

"In my opinion, Mr. Headrick had an excellent stage presence and overall look," wrote event organizer Bryan Nelson from Beard Team USA, in an email. "His moustache was styled very nicely and he was well within the general criteria of the class."

That day, Headrick used his preferred scented wax, Bret Chrismer's Mustache Wax. Following his championship win, he tagged Chrismer on social media and was quickly rewarded by the wax maker.

"He's creating a signature scent for me," Headrick said. "It's going to be bourbon and licorice."

Though this was Headrick's first national title, he offered some advice for budding facial-hair competitors. First and foremost, he said, let it grow for at least six months without trimming it. For those going for a stylized mustache, he added, you have to press through the awkwardness of the "porn-star 'stache phase and just rock it." Two to three weeks in, he recommended, wax the whiskers to train them to lay where you want them.

While competitive facial hair may seem like a major time commitment, Headrick said his routine, including daily wax application and removal, takes no more than five minutes per day, not including the precision shaving with a straight razor, which should never be rushed.

Headrick plans to defend his title at next year's championships and possibly at the world championships in New Zealand in 2023. By then, he said, he hopes his mustache tips reach his eyebrows. Though most hairs eventually hit a terminal length beyond which they can grow no farther, "I think I'll get there," he said.

It's always good to aim high.

The original print version of this article was headlined "Lip Shtick"