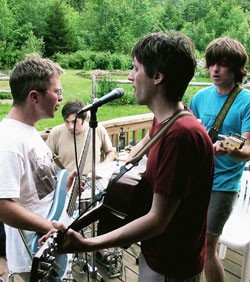 Smart, prolific and methodically sloppy, Guppyboy helped epitomize the Burlington slacker-rock scene in the 1990s. Their catalog wanders through at least three different bands with innumerable lineups across more than 30 recordings, released in just about every format. Longtime townies and newcomers alike will have the chance to don their whitewashed jeans, pump up their Reeboks and relish in the grungy swoon once again as Guppyboy reunite to join Hover, another Burlington ’90s band of note, in a one-off comeback show at the Monkey House this Saturday, July 13.

Guppyboy formed in 1991 when the band members were 20 years old and dressed up in Alice in Wonderland costumes. Guitarists and singers Jeff Baron and Zach Ward (who also plays bass) were writing music for a performance of the Lewis Carroll classic at the University of Vermont’s Royall Tyler Theatre. Chris Ziter, a singer, pianist and guitar player, was the Mad Hatter, and drummer/vocalist Mike Barrett assumed double duty as the Cheshire Cat and Walrus. Offstage, the band solidified over a Tascam 4-track recorder, adopting the name Guppyboy — Baron’s childhood nickname — and dove down the beer-greased rabbit hole that is, or was, the Burlington music scene of the 1990s.

Influenced in part by 1960s British Invasion bands, ’70s-era Dylan and Fleetwood Mac, ’80s new wave, and punk, the Guppyboy sound emerged from their Tascam with a tape-hiss-kissed weirdness that was divorced from their more polished idols. Haci Baba, a 1994 cassette released on their own Tup Keewah label, tacks together introspection, ironic humor, vague images of New York City and musings on the general bummers of being (“Karl’s Got a Job”). The tape includes a fuzzy cover of Bowie’s “Black Country Rock,” perhaps winking at Pussy Galore’s revered lo-fi potshot at Exile on Main Street. The band also throws in the ’90s-requisite answering-machine message. On their early tapes, Guppyboy accomplished genuinely what Ariel Pink and cohorts now tackle with burnout irony.

Each Guppyboy member contributed his or her own songs and, like current Enosburg Falls shape-shifters Farm, switched up instrumentation. (Farm-er Jedd Kettler plays on a 1993 Guppyboy tribute tape called Guppylove, commissioned by Hover drummer Brad Searles.) Their switcheroo format didn’t particularly lend itself to live playing.

“I don’t think people really liked us in our early years,” writes Barrett, who now lives in Boston. “We weren’t very good live.” The young band shared bills with the likes of Do It Now Foundation, Wide Wail, Chin Ho!, the Fags and Hover.

Searles, who lives in Allston, Mass., and also hosts the long-running music blog Bradley’s Almanac, says via email that Guppyboy started out “a much quirkier beast.” Put off at first by “their early lo-fi aesthetic, whacked-out lyrics and occasionally odd song structures,” he eventually grew to appreciate “their more genuine melody, sonic depth and moments of true beauty.”

Former Fags bassist Jason Cooley remembers a show with Guppyboy during a two-day festival put on by Burlington music ’zine Good Citizen in which the band played one long, drone-y song for roughly 25 minutes.

“I remember people were pissed,” Cooley says. “Like, ‘How dare they?!’ I thought it was cool, more ‘fuck you’ than a lot of other ‘punk’ stuff I was seeing.”

Searles, who currently plays with Burlington’s Let’s Whisper, recalls the Queen City in the 1990s as “a time when the town not only had a ton of bands but had plenty of places for them to play and people who actually showed up.”

Bands back then populated venues such as the Last Elm Café and Club Toast, both now long gone. With contemporaries that included the Chainsaws of Babylon (who later became the Pants), James Kochalka Superstar (also featuring Cooley), Zola Turn and others, Barrett remembers the scene to be “a little suffocating, actually. We hid in the fringes of it, but it was fun to be a part of.”

Cooley concurs. “It was like being an adult in high-school land,” he says.

After college, Guppyboy moved for 18 months to Chicago, where Barrett recalls not leaving the house much and playing a significant amount of Sega Golf and Road Rash. After recording an estimated 22 tapes while on leave in the Windy City, they returned to Vermont and added flutist, keyboard player and singer Sasha Bell (now in San Francisco), who mellowed the band for their more folk-minded 1997 release, Jeffersonville. The album includes more thoughtful songs, such as “Washington Square,” which weigh the pros and cons of city vs. country living — though some of the playfulness of their earlier tapes is given over to a sober clarity.

Jeffersonville marked the formal end of Guppyboy, as all but Ward (now in Freeport, Maine) moved to Brooklyn to join former Silver Jews drummer Tim Barnes in creating the Essex Green. This incarnation warranted the most widespread recognition, due largely to putting out records via Elephant 6—the Athens, Ga., neo-psychedelia label that hosted Neutral Milk Hotel, Apples in Stereo, Olivia Tremor Control and others.

Simultaneously, the Guppyboy crew formed another band, the Sixth Great Lake, considered by Barrett as “kind of a Guppyboy 2.0.” TSGL, which Ward would later join, acted as an experimental alter ego to the Essex Green. Along with Jeffersonville, Barrett considers TSGL’s 2001 release Up the Country among Guppyboy’s best.

Coming home, Guppyboy now face a very different Burlington than the one they left behind.

According to Cooley, the city’s change has been good. He says the ’90s “scene” — a concept he detests — wasn’t as open-minded as it is now.

“Things like A Snake in the Garden and tooth ache. wouldn’t have gone over well then,” he says.

“I think that we all agree that Burlington is a magical place and one of our favorite places to be,” he adds.

The reunion show is the brainchild of Searles, Guppyboy’s Ziter and, Barrett says, a lingering nostalgia. Beyond the upcoming show, Guppyboy seem open to playing more, perhaps in a short run of acoustic living-room shows. For now, their audience on Saturday can expect a handpicked retrospective and perhaps a few guests to join them in relishing their 20-plus-year plunge.