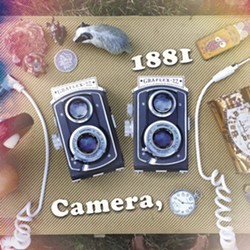 When a band's name includes a particular year, like the 1975, Night Terrors of 1927 or the Chain Gang of 1974, it's fun to speculate as to what event from that year is so significant to its members. Take Burlington's 1881. Are they super-psyched about the birth year of Pablo Picasso? Maybe they really dig the shoot-out at the O.K. Corral. Or maybe they're just stoked on the incorporation of Phoenix, Ariz. Whatever the reasoning, the band is keeping it top secret.

Camera is the second EP that 1881 have released in 2016, following Lights, which came out in April. The band's third EP is due in 2017 — perhaps titled Action, if they follow the pattern. Camera extends the band's lust for UK pop established on Lights. Feisty guitar riffs, gentle organ and layered harmonies recall the warmth of late 1960s/early '70s acts such as the Beatles and the Monkees. The production is finessed with a bright, modern aesthetic, landing near the sound of such bands as Supergrass or Super Furry Animals.

"Nightingale" starts things off at a hearty clip. As fingerpicked guitar scales repetitiously ascend over galloping drums, it seems that a new love is blossoming for lead vocalist and songwriter Rob Slater ("Out of nowhere she just flew over to me / Like my own private show / Straight out of a fairy tale"). Then he's reminded of previous romantic failure, in part a result of his own selfishness ("Cuz my last love left too fast / Once I turned her into me").

Minor chords add uncertainty to "Shortcuts," which calls out a person who's relying on external forces to quell inner turmoil ("All the money that you earn / Is spent on tools / That get you through the day / By killing your concerns").

Guitars take a backseat to organs on "Dead End Street." Its clever chord progression circles around just as it seems it will resolve, tying the song's sentiment into its architecture. The slow-burning "Adam and Eve" rounds out the EP, using the classic biblical reference as a metaphor for the pursuit of something Slater knows to be forbidden. It's also possible that there is no metaphor, and the song is a straight musical rendition of the famed fall of humankind.

One final thing to notice about the number "1881" is its perfect symmetry, both on the horizontal and vertical axes. Once the third EP is released, it will be interesting to hear all three side by side by side. Might there be some symmetry? What secrets might possibly be revealed? There's nothing like the intrigue of something that comes in threes.