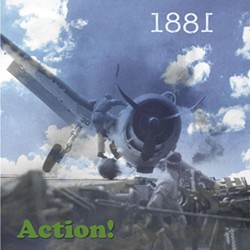 Burlington's 1881 pulled off an impressive feat in 2016: They released three EPs in nine months. And they saved the best for last. First came Lights, followed by Camera. Last came the predictably titled Action, which the band managed to squeak out just under the wire on Christmas Day. How's that for a stocking stuffer?

Action continues 1881's retro-pop leanings and continues to draw heavily on 1960s British invasion and '90s Brit-pop sounds. They've also assimilated a bit of twang into a couple of the new songs, which is a welcome addition. Songwriter and vocalist Rob Slater proves himself a true pop aficionado. The dude knows his way around a hook, and his chord progressions always sound fresh and unexpected. Ryan Cohen of Robot Dog Studio produced the EP with the band and also mixed and mastered it.

"The Art of Giving In" comes closest to crossing the border into country country. The song would likely do well if reinterpreted by a bluegrass band. Simply swap the briskly plucked, beatific guitar line with banjo, add a washboard and boom — you're south of the Mason-Dixon Line.

There's foreboding galore on "8 Long Years," a song about struggling past a lengthy period of stagnation — or imprisonment, if you want to take the song literally. Wistful, high-pitched guitar peaks and bleeds over a warm chorus of "oohs." It's like the Beach Boys gone Americana before erupting into surging slow rock.

"Give Love" chronicles a series of chance encounters and corresponding life lessons. Slater sings of meeting a priest, a nurse and a bum — and, no, they don't walk into a bar. All of them offer perspective about life and love as he ratchets up the intensity one half-step at a time.

It's hard to discuss a band as British-sounding as 1881 without mentioning that one super-famous British band that revolutionized pop music. You know which one I mean. Starts with a B. While the comparison is practically begging to be made, 1881 hadn't released a song that sounded uncannily like it was written by Lennon/McCartney — until "Everyday Weekend," Action's final track. As the song's sharp guitar chords pop over its "shoop-shoop" background vocals, you can practically see crowd-control barriers buckling under the fury of thousands of screaming fans.

Now that the Lights, Camera, Action trilogy has been fully revealed, the question is: Do the EPs stand on their own, or should they be listened to as a full album? It's my thought that the latter could prove a great listening experience, since the EPs only improve as they progress.